Does MUN take into account the ethical history of these investors, or do they turn a blind eye once they see the cloth bag emblazoned with an over-sized dollar sign?

Memorial University recently announced a significant partnership investment with the Iron Ore Company of Canada (IOC) and the Research and Development Corporation (RDC), a provincial Crown corporation, that will see nearly one million dollars dedicated towards new equipment and software for advanced mineral analysis.

The intellectual property rights of researchers using IOC-funded technology, and Memorial’s aptitude for choosing morally dubious bed-mates, will all be called into question.

The news is another major step in Memorial’s continued research into the exploration and development of natural resources. As professors and faculty at Memorial begin to utilize the cutting edge Field Emission Gun Scanning Electron Microscope and Mineral Liberation Analysis (MLA) software for research and innovation projects, the partnership between the university and IOC has the potential to create a co-beneficial snowball effect for both parties, future students, and the province’s ever-expanding natural resource industries.

On the flip side, the announcement that Newfoundland and Labrador’s premiere higher education institution is entering into yet another partnership agreement with a huge, influential corporation will no doubt raise a few critical eyebrows. Among other things, the academic sovereignty of the university, the intellectual property rights of researchers using IOC-funded technology, and Memorial’s aptitude for choosing morally dubious bed-mates, will all be called into question.

A History of Compliance

This kind of controversy is nothing new for Memorial, or for those who regularly denounce the increased corporate presence at the university. Anyone familiar with the St. John’s campus has seen the architectural eyesore known as the INCO Innovation Centre, a physical manifestation of the $20 million investment by the multinational mining giant. According to Memorial’s official page, the centre “represents the university’s vigorous commitment to innovation in research and teaching.” If you were attending Memorial at the time of the centre’s construction you may not remember that inspirational blurb, but you might remember students protesting in front of the University Student Centre and graffiti warriors tagging the construction zone with “Don’t Make INCO the Heart of Our Campus”, alluding to the building’s location atop the grave of the defunct Student Union Centre.

Supporters of the INCO partnership wanted to discredit protesters as being anti-corporation and fiscally shortsighted, which is really only a half truth.

Supporters of the INCO partnership wanted to discredit protesters as being anti-corporation and fiscally shortsighted, which is really only a half truth. The real story is that more people were protesting the environmental, labour, and human rights history of Memorial’s new bestie. In fact, Vale, the Brazilian-owned parent company and commonly used corporate prefix in the name Vale-INCO, has a history plagued by morally questionable choices. From the $36 million dollar lawsuit launched by the residents of Port Colborne, Ontario, against INCO for environmental damages to their community, to allegations of human rights violations in New Caledonia, Guatemala, Memorial may have made a sound financial investment by partnering with the multinational mining corporation, but it may not have been the best way to convey the institution’s understanding of environmental issues or commitment to social justice.

A closer look at the IOC partnership reveals more of the same ‘turn a blind eye’ policy from Memorial University. Australian mining giant Rio Tinto, IOC’s majority stakeholder, is the third largest mining company in the world. In addition to operating iron ore facilities such as the one in Labrador, Rio Tinto also explores, develops, and excavates aluminum, copper, diamonds, gold, salt and titanium on six continents. In addition to these endeavours, Rio Tinto has also built an impressive portfolio of environmental, labour, and human rights infringements, ranging from air and water contamination in Salt Lake City, Utah, to illegally forcing resettlement of families and entire villages in Indonesia, to questions of reneging on an agreement to scrap planned uranium mining on Aboriginal land in Australia.

The Corporate Partner(sponsor)ship: Are we asking the right questions?

Some will look at Memorial University’s new deal with IOC as just another example of the increasing commercialization of modern society, specifically that the university is “selling out” its academic ideals for the sake of the almighty dollar. And to a certain extent, they have a point: Encouraging corporations to set up shop on campus could conflict with the intellectual sovereignty of the university on a philosophical level.

People who continue to debate over whether we should allow these corporate partnerships are buying tickets for a train that has already left the station.

The University of Toronto is perhaps the most pertinent example of the potential conflict of interest inherent in corporate influence over an academic institute. It has had to deal with the fallout of allowing Peter Munk, head of Barrick Gold, to invest $35 million to create the Munk Centre for Global Affairs. The donor agreement included various notes on “branding” the centre, amendments about reporting the school’s programs and initiatives to Munk’s board of directors, and reserving the main entrance of the building for senior staff and special guests of the school.

Strictly speaking, corporate partnerships, sponsorships and investments in public and private education have long passed the hypothetical stage. People who continue to debate over whether we should allow these corporate partnerships are buying tickets for a train that has already left the station.

A more productive debate might include the screening process for the partners we choose. Does Memorial take into account the ethical history of these investors, or do they turn a blind eye once they see the cloth bag emblazoned with an over-sized dollar sign? Moreover, since this is becoming a trend, do they really care that their students appear to have moral values that supersede cutting edge technology, no matter how awesome and laser-filled that technology might be? 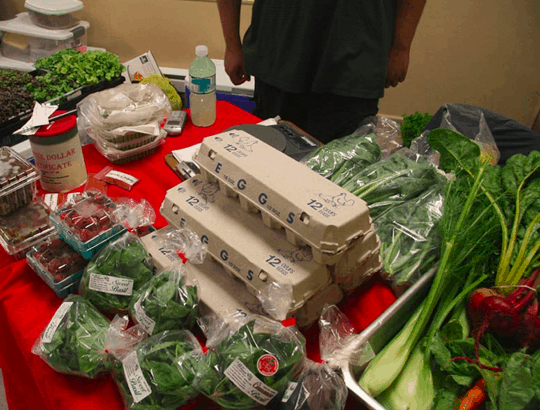 The St. John’s Farmer’s Market growing steady
All vendors to be licensed this year