Well the kids are back in school, the scent of autumn is in the air and the candidates are bangin’ on the doors. Unofficial campaigning of varying degrees has been ongoing for most of the summer – and even earlier – but with the election a mere month away the excitement and intensity of party supporters is palpable.

Every week from here on in The Independent will be providing a weekly round-up of the ongoing campaign: a quick’n’dirty update for those of you too busy to follow the news on a daily basis. It’ll be non-partisan, but it won’t be non-opinionated: we’ll provide cheers where they’re earned and jeers where they’re deserved. If a party veers from the road of the rational, we’ll make sure you know about it. This is our best, most honest assessment of how the parties’ campaigns are playing out.

The province’s New Democrats are undoubtedly the most excited ones right now. Polls indicate their support is higher than it has ever been in this province. The most recent poll by Corporate Research Associates shows them at 24%, holding second-place ahead of the province’s Liberals, and continuing to rise (up four points from the previous poll). They’ve got 27 out of 44 candidates in place, including the province’s youngest ever (no complaints about youth engagement directed toward their ranks!).

Policy-wise, they’ve been focusing on economic planks: a promise to cut small-business tax by 25%, a commitment to help revitalize the fishery and a loud critique that the province’s natural resource wealth is not being spread effectively throughout the province, particularly rural parts. They’ve also made a commitment to phase in full-day kindergarten in this province: an appeal no doubt directed toward the province’s parents and those hard-hit by the rising costs (and diminishing spaces) for childcare. The NDP have also been more aggressive than we’ve seen before in holding the governing PC’s to account: they came out hitting hard against the provincial government’s failure to organize a strong bid for federal shipbuilding funds, and they also led the charge on news of hundreds of skilled trades students in this province being forced to withdraw from programs after being denied funding for training which they had expected to receive under government programs which, it later turned out, had run out of money. This is a more organized, aggressive and articulate NDP than we’ve seen in this province yet, and they’ll be one to watch. They face two major challenges: a simultaneous election happening in Ontario, which is going to split experienced federal organizers and campaigners between the two provinces; and the fact that the PC’s are running a very strong candidate – former auditor general John Noseworthy – against NDP provincial leader Lorraine Michael in her own district. Part of that strategy is probably to keep her tied up on her own campaign so she won’t be able to spend as much time supporting other less experienced candidates throughout the province. We’ll see how that plays out.

The province’s Liberals have faced an uphill struggle ever since Danny Williams’ PC’s first devastated their ranks 8 years ago. Then, a mere month ago, provincial party leader Yvonne Jones stepped down. The Liberals win strong kudos for the way they handled the leadership selection process: while the upcoming election didn’t leave them time for a full-fledged leadership convention, they got seven strong (well, some not-so-strong, perhaps) leadership candidates and they did the best they could to make the process democratic and inclusive by organizing a telephone town hall in which over 3000 people from across the province participated (kudos to former Liberal candidate Mark Watton for organizing that brainstorm). They turned a potential moment of weakness – a last-minute pre-election leadership transition – into one of the most effective displays of provincial participatory democracy in recent history. Nicely done.

But their new leader – Kevin Aylward – has faced a string of challenges since then. There was bitterness expressed by some party members that a newer, fresher face wasn’t chosen, and at least one declared provincial candidate even quit after his selection, despite party calls to remain united behind the new leader. The CRA poll shows his party at a mere 22%, behind the provincial NDP, and they only have 24 candidates in place thus far. These are all challenges Aylward will have to surmount, to show that his experience is worth the expectations that are riding on it.

Policy-wise, before Jones stepped down the party released a strong platform around bolstering support for the province’s seniors. While it was a bit skimpy on concrete spending details, no one can doubt that there’s a growing seniors’ crisis in this province and so they deserve credit for trying to make it a front and centre election issue. Of course, under Jones’ leadership the party leveled a strong attack against the Muskrat Falls deal. And, while it seemed an unlikely strategy a few months ago in the face of strong public support (and Danny Williams’ championing) for the deal, it might actually be paying off. In August a joint government-appointed review panel comprised of federal and provincial representatives issued a report that was critical of the project, saying the province had failed to demonstrate that economic and energy benefits justified the project cost, and warning there were significant questions about the long-term financial and environmental impacts that needed to be studied more closely before proceeding. The report, quite critical of the project, served as a sort of unexpected vindication for the Liberals’ strong stand. The Liberals have also followed the NDP in attacking the denial of funding to hundreds of the province’s skilled trades students. However, the key word here is “followed” – if the Liberals want to regain the votes the NDP have siphoned off, they’ll have to be first in raising the issues affecting this province, not second and following in NDP footsteps.

And what of the Progressive Conservatives? They’re the toughest ones to call right now, partly because their campaign website – dunderdale2011.ca – is a complicated web of party campaign news coupled with government spending announcements. For the incumbent, governing party it’s hard to consider them simply as a contender with a vision, since they’re the ones in power and with the actual money to spend on implementing their current vision. In some ways, then, the incumbent party must be assessed differently than the others – not on the strength of their vision, but on the strength of their record. And that is not something we can do in a single column. In terms of specific election readiness however, they have all but one of their 48 candidates in place, and an election for the last one coming up. However they’ve seen their popularity plummet in recent months, a drop attributed by many to their outspoken support in the recent federal election for the widely unpopular – in this province – federal Conservatives under Stephen Harper. They were at 54% in the most recent CRA poll, down three points from the previous one in May. How long will they continue to drop? The longer they do, the more any outcome seems possible on October 11.

The PC’s haven’t released a clear campaign vision for the next four years yet, but we can be sure that Muskrat Falls and development of the Lower Churchill will be part of it – they’ve staked their political future to that development. They received, of course, a boost of sorts when the federal government announced its commitment to providing a loan guarantee for development of Muskrat Falls – although details on precisely how that guarantee will work out are not due to be finalized until after the provincial election. Outside of the ongoing cascade of government spending announcements – which have been rigorously criticized by the NDP as a form of unfair pre-campaigning – Premier Dunderdale attended the Labour Day parade earlier this month. This is a telling gesture toward her more labour-positive approach; recall that she was in office mere days before the lengthy strike by the Burin support workers was finally settled. Dunderdale seems to have a more labour-friendly attitude than her predecessor, and it appears to be a side she wants to cultivate. And the province can celebrate the fact that on September 9, Premier Dunderdale joined Facebook. Clearest sign of any that an election is in the works.

And what of former Premier Danny Williams? Well, currently he seems more interested in the Alberta election – where he’s off rounding up support for his preferred PC leadership candidate in that province, stumping about Fort McMurray on his behalf.

A lot can happen in a week. Tune back in next Monday for our next provincial election 2011 roundup. 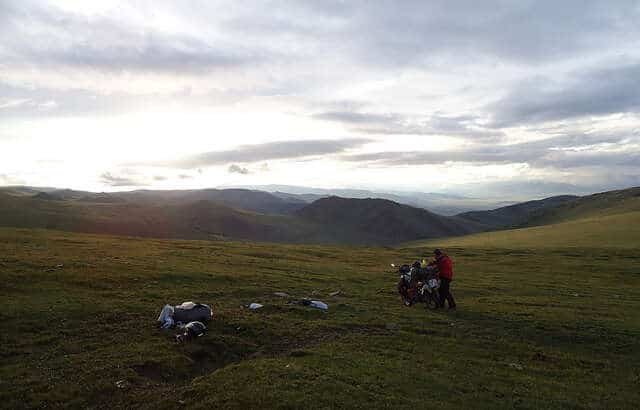 My best accidents
Our intrepid round-the-world motorbike adventurer reflects on some of her more memorable accidents...

Today on The Independent…