From Ecuador to Labrador

Santiago Escobar is originally from Ecuador and now lives in Canada, but it’s only partly by choice.

“I denounced corporate corruption by Chevron, so now my life is in danger,” he explains simply.

He’s one of the organizers of the third international Mining Injustice Conference, held in Toronto this past weekend. It’s organized by the Mining Injustice Solidarity Network, a Toronto-based group aiming to raise awareness about the impact of Canadian mining companies abroad. What began a few years ago as a set of informal discussions has exploded in size and scope, and according to organizers it’s a reflection of the dramatic growth of international activism directed against Canadian mining companies. This year, the conference hosted over 600 delegates and speakers from 15 different countries.

“We have seen violence, a lot of drugs, a lot of sexual exploitation. It’s not a good thing for our communities…” —Santiago Escobar

Escobar attributes the growth of activism partly to the increasing activities of Canadian mining companies in countries like his own.

Communities have tried engaging, he says, but to no avail.

He’s quick to emphasize that they’re not out to stop mining. What the mining justice movement is about, he explains, is giving the power to communities to say yes or no to having mining operations in their backyard.

“We’re not definitively against mining. We want of course better laws for accountability, and we also want the ones who will be affected, to have the right to decide whether to have mining or not to have mining. The most important thing here is what the people want.”

From Labrador to Indonesia

Tracy Glynn has seen first-hand what Canadian mining companies do abroad. A long-time mining activist and a campaigner at the New Brunswick Conservation Council, she did her Masters in Environmental Science at Memorial University of Newfoundland. There, she studied the environmental and health impacts of the Inco smelter in Indonesia. Her own research project materialized when Indonesian community activists came to visit Labrador and met with community activists there.

“There’s a lot of sharing going on and that’s a strength that you see with a lot of mining affected communities,” she explains.

Glynn has also observed the explosive growth of mining activism in Canada.

“Since Canada’s companies are controlling the global mining industry, it was only a matter of time till you’d see this growth of activism here in Canada. I know a lot of people who have gone to mining affected communities in Guatemala, Honduras, Papua New Guinea, Indonesia, and they’re horrified by what they see in those mining affected communities, and they’re horrified that Canadian companies are doing this, and they want to do something about it.”

“It’s not just a case of a few bad apples,” she says. “It’s widespread, and I think the fact that there’s no international court or anything to hold mining companies to account is a problem…there’s no legal mechanism whatsoever to hold mining companies to account for their environmental crimes, or the fact that women in Papua New Guinea are saying they’re being gang-raped by mining security guards. There’s nothing in place for any of those people to have any sort of justice.”

Glynn argues the problem is only partly one of corporate impunity abroad. What mining activists want, she says, is for Canadian companies to be held accountable within Canada, for their actions outside of Canada. Right now, she explains, companies can freely commit acts which are considered crimes in Canada, and not face punishment so long as they do not commit those acts within Canada’s borders.

She points out that last year’s Bill C-300, a mining accountability bill which would have cut government funding to mining companies that commit crimes and human rights abuses overseas, didn’t pass in Parliament. She says its failure speaks to the enormous lobby power of mining corporations. Last month, Amnesty International released a report that contained strong warnings about Canada’s diminishing human rights record. “In recent years there has been a decline in Canada’s international human rights leadership,” says the report Getting Back On The ‘Rights’ Track. “As leaders in the extractive industries Canadian companies have become laggards on human rights protection.”

Problems in our own backyard

It’s not just overseas that mining activists are struggling.

“Often we think that mining practices in Canada are better than they are overseas, and that’s not the case,” Glynn explained. “Actually our regulations are not that strong. Like dumping in lakes, many countries don’t allow that, but we do. Mining companies are saying it’s more favourable to do mining in a lot of Canadian provinces than in countries abroad.”

“Building the Fluvarium was actually my idea…when we got there, the executive manager said ‘we can’t have you here, it’s not politically good for us,” — John Gibson

The case of the Sandy Pond Alliance in Newfoundland and Labrador provides an example of the challenges faced by environmental groups challenging mining activities in Canada. Sandy Pond is a lake in Newfoundland that’s been designated as a “tailings impoundment area” by the federal government, meaning that Vale Inco will be able to dump toxic waste in the lake as part of its nickel processing project in Long Harbour. The Sandy Pond Alliance is taking their battle to court to prevent the destruction of the lake.

This year on Earth Day, the Sandy Pond Alliance was astounded when they were kicked out of an Earth Day event at the Fluvarium in St. John’s, where they had planned to share an information booth with the Sierra Club. According to John Gibson, a retired scientist with the Department of Fisheries and Oceans and one of the Alliance’s organizers, the managers of the Fluvarium said the group’s efforts to save the lake were considered too political for Earth Day.

“It was really quite amazing,” Gibson said. “Building the Fluvarium was actually my idea…when we got there, the executive manager said ‘we can’t have you here, it’s not politically good for us’.”

The expulsion of an environmental group from an Earth Day event, Gibson says, demonstrates the problems resulting from energy corporations trying to improve their reputations by funding environmental groups. In the process, they often wind up developing political control over those groups.

“The problem is they’re [Fluvarium] now getting funded by SunCor Energy. And believe it or not, even Vale Inco was there…I think it’s absolutely disgraceful. I mean you can’t have political interference with that sort of thing…when they accept money, they have to be careful that that doesn’t interfere with their policy of saving the environment.”

Gibson is hopeful their group will be able to stop the destruction of Sandy Pond. At issue is a federal regulation which allows the federal government to reclassify freshwater lakes as tailings impoundment areas: essentially, dump sites for toxic waste. Gibson says the original intention of the regulation was to grandfather in existing lakes that had already been used as toxic waste dumps. But once it was added, mining companies and the government began to actively use it to reclassify new lakes as dump sites as well. Mining companies have already applied to destroy 12 freshwater bodies across the country (including three in Newfoundland and Labrador); five have been approved. So the Sandy Pond Alliance is taking the federal government to court. They’re optimistic about their chances.

“This regulation never went through Parliament, and it’s really a loophole. They’ve used it as a loophole to pollute more pristine lakes. Pristine lakes, worldwide, are not actually that common…DFO is supposed to protect our fisheries, not destroy them. I’m just appalled at the attitude. What we want to get is this loophole to be made illegal. You can’t put noxious substances into freshwater bodies.”

Gibson says there’s a mistaken idea that because Newfoundland and Labrador has so many lakes, it’s not a big deal to use a few of them as toxic waste sites. What’s not understood, he explains, is that each lake has its own unique ecosystem which has developed over thousands of years.

“That cannot be replicated,” he emphasizes. “There’s compensation, but really that’s just a public relations gambit. The compensation is to make a small reservoir nearby, widen a couple small ponds that already exist, and put fish in it. You can’t dig a hole, drop some fish in it and call it a natural fish habitat.”

Gibson recognizes the challenges they’re up against.

“The mining industry is a David versus Goliath battle, and they have Bay Street lawyers, and they want to keep these things going forever.”

Even environmental impact assessments are inadequate, he argues.

“The problem is, consulting companies always select data that’s going to support their client. And so these environmental impact assessments are really, some of them pretty pathetic…I think mining companies will just try and get away with what they can…but that’s why we have regulations. That’s why we have the Fisheries Act. And so to corrupt it with these loopholes is disgraceful. These things are not being done democratically, so we have to go to court.”

He echoes Glynn’s assessment that Canada’s laws are much more lax than those in many countries in which he and his colleagues have worked.

“In South Africa, they never did it that way. It’s only here that they can get away with it. They wouldn’t be able to get away with it in England, or Europe…because they don’t want to lose their lakes.”

Fighting the non-democratic nature of such decisions appears to be a common theme in the mining justice movement, from Ecuador to Newfoundland and Labrador.

“Consent is the main thing,” Glynn emphasized. “Letting communities decide whether they want a mining community in their backyard. That’s key. Right now there’s nothing there…to allow communities to have a say.”

“Do you know what it’s like for an entire town, your church, everything…it will all be gone, just so a few Canadians can get rich.”

While the Sandy Pond Alliance is trying to save Newfoundland and Labrador’s freshwater bodies, activists in other countries have even more at stake. Back at the conference launch, a question and answer period quickly turns emotional. Whispers trace the room in a dozen languages or more, and as stories are told, I hear a soft sobbing from someone behind me. A woman from Colombia raises her hand to speak, and pleads with those around her, looking for the Canadians in the audience. “Lots of you don’t know that an entire town is going to disappear, because of a Canadian mining company,” the elderly woman enunciates, carefully framing the unfamiliar English words as she fights back tears. “Do you know what it’s like for an entire town, your church, everything…it will all be gone, just so a few Canadians can get rich.”

“Now is not a good time to be discovered as a Canadian when you’re traveling abroad,” one human rights worker laments.

More eerie is the calm, matter-of-fact tone of a middle-aged Canadian in the front row, who describes his work with a human rights group in Colombia. They built a memorial this summer to honour 14 young boys who were murdered by the military (as part of the ‘false positives’ scandal whereby soldiers kidnapped and murdered civilians, dressing the bodies in guerrilla outfits in order to receive promotions, cash bonuses or weekends off). The grisly practice speaks to the dangers both activists and locals face in trying to bring about change.

It’s little wonder Colombians are silent, another member of the audience observes.

The director of a human rights theatre group that operates in Colombia stands up, waving her arms in disagreement. “People in Colombia are fighting,” she says vehemently. “They are not staying silent. But if they raise their voice, they’ll be killed. That’s why I’m here, that’s why we’re doing this in Canada. Because Canada is responsible for making this happen.” 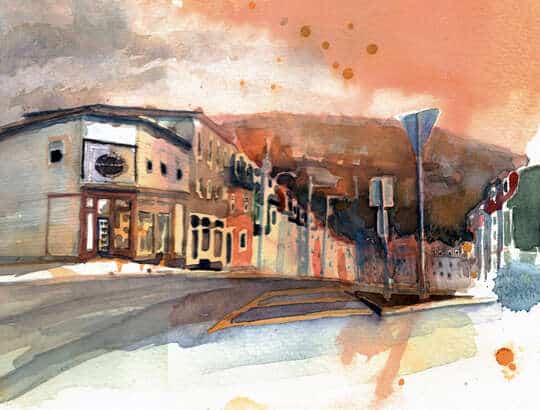