Finally, we can answer the question: What did they actually do?

The Economic Action Plan was the centerpiece of the budget presented to Parliament when it first met after the infamous December 2008 prorogation. The Plan appeared to herald a major change in government policy.

The two-year Plan consisted of four elements: $12 billion in infrastructure spending, $8.3 billion for a “Skills and Transition Strategy”, $7.8 billion to stimulate the housing sector, and $7.5 billion to support businesses and communities.

Scepticism that Flaherty really had changed his policies resulted in the Liberals, now led by Michael Ignatieff, tying their support for the Plan to the tabling in the House of quarterly reports on the Plan’s rollout. Not surprisingly, Flaherty’s Economic Reports to Canadians became exercises in public relations.

What was actually done?

As marketing increasingly won out over policy formulation, the actual specifics of the Plan itself became almost impossible to follow. New initiatives were added. Others were changed to fit the latest slogan. Meanwhile, the collapse of the auto industry in politically sensitive Southern Ontario forced a complete revamping of spending priorities.

By June of 2009, support for business and communities had ballooned to $13.6 billion, with 71% going to the immediate bail-out of General Motors and Chrysler. By contrast, the hard-hit forestry and pulp and paper industries received a scant $61 million that year.

The housing initiative was rolled into infrastructure spending, despite the fact that $3.8 billion were tax breaks for first home-buyers and home renovations. Social housing saw the biggest cut-backs; it initially had been budgeted at $5.6 billion, but by Plan’s end had received only $2 billion.

Infrastructure spending totalled $16 billion, despite the shift of $2 billion for post-secondary education to “Creating the Economy for Tomorrow.” Both were shared-cost arrangements, and so dependent on the municipal or provincial government, or a specific college or university, having the funds available. Thus a program renamed “Helping All Regions Prosper” exacerbated regional disparities, while the gap between public universities, like Memorial, and well-endowed private universities, like McGill, continued to grow.

Was anything new added?

Creating tomorrow’s economy included a $1 billion Clean Energy Fund. No matching funds were required here and over half went in direct subsidies to major energy companies. Shell got $120 million for carbon capture storage (CCS) of its tar sands development, while TransAlta got $351 million for CCS at its coal-fired Keephills project.

Support for the unemployed was also cut-back from $8.3 to $7 billion. More than a third of this much reduced figure went to the employed and to employers as it was used to finance the temporary freeze on Employment Insurance (EI) premiums. However, an important change was introduced: we now have a two-tiered EI program. People who have worked full time without drawing EI for a number of years get substantially enhanced benefits and differential access to training. Seasonal and part-time workers, who are disproportionately present in Atlantic Canada, are denied these benefits.

A toe in the water?
If you build it, they will come. Has Newfoundland done the building? World Junior hockey fans should hope so. 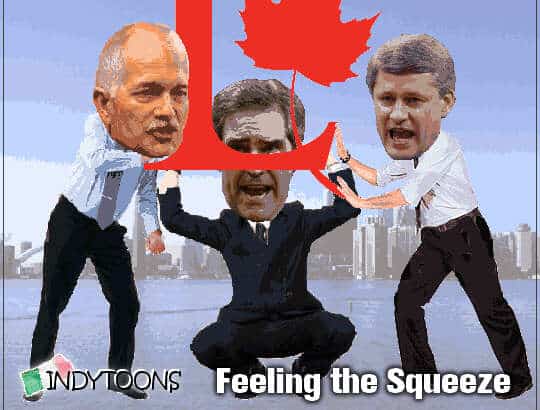 Indytoon | Iggy in the middle
As the campaign enters its last week, the Liberal party feels the squeeze from the left and the right!