“If 50 per cent of the candidates were women:” talking with Elizabeth May

There are stories women tell themselves about running for politics, the stories women hear from other people, and the stories the media tell: all these play a part in whether or not a woman decides to run for political office. The leader of the Green Party, Elizabeth May, talked about all these kinds of stories when we sat down in the hour before she was scheduled to speak at a recent Equal Voice event in St. John’s. We talked about running for political office as a woman in Canada in the 21st century.

“We won’t get the kind of government we deserve until we get more women elected,” she said to a full room in City Hall after our conversation.

The fourth woman to lead a federal party in Canada, May talked about what holds women back, what it takes to win, and how to help a woman imagine that her place is, in fact, in office. We also talked about her mom, of course. Here’s what she had to say.

ON ASKING A WOMAN TO RUN FOR POLITICAL OFFICE.
“I know that to talk a woman into running takes three or four calls. Because the first time women always say ‘I’m really flattered you’d ask me’ or ‘I really admire the work you are doing—but I’m sure you could find someone better.’ And the interesting things is, I also have to recruit men, and I have never, ever had a man say to me ‘I’m sure you can find someone better.’

“It’s not in their socialization as little boys. I’m not saying they’re egomaniacs, but they don’t think of it. Whereas a woman goes ‘I’m really flattered, but I’m sure you could find someone better.’ Which is kind of interesting. So the first thing to say is, if you’re going to run, see yourself winning.

“I can tell you that when I go out trying to recruit candidates—and I’m trying to get to 50 per cent women candidates—it’s hard. And it’s not because we can’t think of good women to run. It’s talking them into it.”

HOW SHE GOT INVOLVED IN POLITICS.
“Reluctantly.”

THE FULLER STORY.
“The leap into partisan politics was entirely due to Stephen Harper becoming prime minister in 2006. I didn’t even join a political party until I was in my early fifties, so 2006. And I’d been essentially nonpartisan all my life. I’d been small-p political, but not partisan.

“At that point I’d been executive director of Sierra Club Canada for 17 years. And I realized that it was worse than I thought it was going to be. I knew Stephen Harper personally and I knew he was personally hostile to environmental goals. Which is an anomaly in Canadian politics. I’d worked in the Mulroney government and the progressive conservatives, you know, they might not make it their top priority—although Mulroney did—but they were never aggressively against nature. It’s hard to describe exactly what was going on when Stephen Harper was Prime Minister. But I knew from trying to talk to him when I was at Sierra Club that he wasn’t interested and that he was actually hostile.

“This was the tipping point. One of my best friends is Maude Barlow. We would be at the same time getting the same calls from the same people asking us to run as candidates. I’d talk to Maude and say ‘what are you thinking? You want to run this time?’ And we’d always come back to the same thing. She for Council of Canadians, me for Sierra Club: ‘I think what I’m doing right now—for public policy, for the issues I care about—being an NGO person is more effective now than being in government. I realized under Harper, he’s destroyed what I can do from Sierra Club. It’s no longer effective.”

TIPS FOR WOMEN THINKING OF RUNNING FOR OFFICE.
1. See yourself winning.
“I think why more women aren’t in politics is that our socialization limits us into thinking ‘I’m happier in the back. I’m happier supporting a good candidate.’ So the first thing to say is if you’re going to run, see yourself winning.”

2. Be prepared ahead of time for the fact that it will be personally hurtful.
“There will be nasty things said. Whisper campaigns. Even stuff in the media that’s just not true about you. So you have to be a bit prepared.”

3. You need your family with you.
“If you have a partner, you need his or her support. If you have kids, they need to know what this looks like, as much as you can know. I’m not saying women are limited because we’re moms, I’m not saying that. But I would say make sure that your family is on board because you don’t need that stress. It’s hard enough being a candidate. The thing is, while it’s hard being a candidate, it’s also fun. You attract a good team. And knocking on doors is a wonderful experience. People are very nice and they’re very happy to meet a candidate. If you’re a people person and you’re a woman candidate, you’re going to do great. Women candidates actually do better than men candidates. When a woman runs, voters don’t have anything against voting for a woman candidate. Not in Canada.”

IF MORE WOMEN WERE ELECTED.
“We’re now at the #metoo, #timesup moment. What would the world be like if women were truly equal partners and equal players in the decisions about our lives? Things would be totally different. It’s not that every women is a feminist or that every woman is a peacemaker. But on average you’ll find more feminists and peacemakers among women.”

HOW CAN WE GET MORE WOMEN ELECTED?
“Well, federal party hierarchies make a difference. I’ve heard horror stories from when Stéphane Dion said we’re going to have 40 per cent women candidate. There were some electoral district associations where, once they’d picked the Liberal party candidate and she was a woman, they sat her down and said ‘well, we’re not working for you and we’re not going to let you spend any money in the bank account because this was my turn and you took it.’ This is one thing to look at, are you going to get the support of your party? So the barrier for women running is more about the old boys club within each party and their resistance.

“Our party does not want to have a quota system because we’re a grassroots party. The quota system implies something top-down and we’re not top-down. But I’m pushing all of my electoral district associations to make sure that, in the pool of candidates for the nomination meeting, make sure you’ve got at least one woman. I don’t want to have a slate of candidates that are all white guys.

WHAT GIVES YOU HOPE FOR THE FUTURE?
“Changing the voting system. Because we know that any of the countries with fair voting have higher proportions of women in their parliament. Women in countries with proportional representation have a much higher percentage of the vote and as a result more women are elected.

“But here we are: we rank 64th in the world, as you know, for how many women are in our parliament.”

TALKING ABOUT MENTORS.
“Well, my number one mentor in life was my mom. And she was an instinctive and intuitive organizer. I grew up in the states and my mom, who was an artist, not a scientist, not a political person, read in the newspaper that atmospheric testing of nuclear weapons was going to cause an increase in childhood leukaemia globally. I wasn’t even walking yet and my mother started organizing against nuclear weapons testing. So my whole life I watched my mom in one movement after another.”

ON NOT BEING LIKED BY EVERYONE.
“I certainly know that we as women are raised to think that everyone is going to like us. And in politics, no matter how hard I try, I mean I have 92 per cent approval rating in my last leadership review in the Green Party, right? But that does mean eight per cent don’t want me to stay on. So if you think about that, well who were those people and what did I do to them? You can’t. You have to say right, not everybody’s going to like you all of the time. That’s a hard message for women.”

ON BEING PERSUADED TO RUN.
“Anyway, I joined the Green Party in 2006 because I’d been persuaded to run for leadership by Jim Harris, the leader at the time. He’d already announced he was stepping down and he wanted a real leadership race.

“The other person who really twisted my arm is now the only Green elected to Vancouver city council. She was then deputy leader, Adriane Carr. I didn’t realize why Adriane was trying to talk me into it so very aggressively. It turns out she’d promised Jim that if she didn’t talk me into it she’d do it. But she didn’t want to do it, so she talked me into it.

“So when I say reluctantly—it was really a struggle. I had to leave as executive director of Sierra Club Canada. I looked around the environmental movement and here’s a gender analysis: most of the other groups were headed by men and had really good salaries. And I did not have a good salary at the Sierra Club. I was on a part-time contract and it was very catch-as-catch-can, and I was a single mom. But the risk of stepping down from that job to try something as unlikely, to announce that I was going to run for leadership of a party I’d only just joined. There’s a certain amount of chutzpah to that.

“They were trying to recruit me because at that time I had a bit of a national reputation for being executive director of Sierra Club. At least the media would know me.

“I thought: what kind of risks am I taking as a single mom? So for me, it was basic issues, like can I manage this financially since I’m raising a child on my own? Can I manage the change in culture because politics looks really unpleasant.”

The rural used to be radical. What happened?
Rural space is work space, not a leisure space. The city should be a space for working people, not a playground for the rich. Urban… 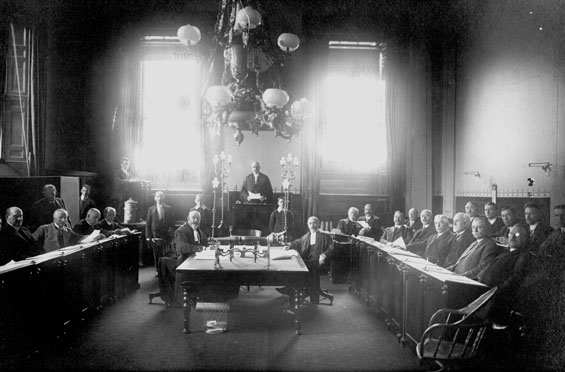 Here’s why democracy is better
We need more democracy, not less