Two weeks out from the city election, St. John’s adopts new heritage by-laws—which are then immediately ignored by council, for some reason.

Back on weekly meetings, the St. John’s City Council met this week to discuss matters of heritage, mostly, with a side order of post-hurricane housekeeping.

New Heritage By-laws: A Part of Our Heritage

Beginning the substance of the meeting, Cllr Burton introduces the motion to adopt the City’s new Heritage By-Law, which has been a major focus of hers during this term. The by-law adds a new heritage area in the Battery, brings in stronger, more enforceable regulations about heritage, and codifies heritage design standards. Much of the content of the by-law was previously contained in the development regulations. By moving these regulations to their own by-law under the City of St. John’s Act, the City can now prosecute offenses like they would any other by-law violation.

Cllr Burton calls on Chief Planner Ken O’Brien to speak on the by-law, starting with a question on heritage uses: some expanded allowances for heritage buildings outside specific zone requirements, intended to make the ownership and preservation of these large buildings more economically feasible. O’Brien points out that heritage uses are intended to prevent heritage buildings and areas from becoming “museum pieces” and allows them to continue to be used for practical purposes. The new heritage by-law codifies design standards for each heritage area to preserve the character of these iconic parts of the city.

The by-law brings in significantly expanded public engagement requirements as well: an application to demolish a Heritage Building, an application to amend or revoke the designation of a Heritage Building, an amendment of a Heritage Area, the designation of a new Heritage Area, an application for a new development adjacent to a Heritage Building, or anything else related to heritage that they decides will require input from the public. Under the new by-law a “heritage report” will be required in many of those same instances, or any other time an inspector thinks one should be required. Both of these requirements enhance the protections for heritage buildings and areas significantly, and creating a separate by-law to address this means there will be concrete repercussions for not following the rules.

As I’ve noted in other coverage, despite what by-law detractors continue to posit, there will remain in place stringent rules around heights and other development concerns in the downtown, and in all zones throughout the city, as set out in the development regulations. The regs, not any by-law, is the document which governs those matters. The heritage by-law adds an additional layer of scrutiny for projects in heritage areas, for heritage buildings, and for those adjacent to them. This is a significant step forward when it comes to having actual enforceable rules to protect built heritage in the city.

Let’s check out a visual representation of this. Here’s a screencap of the heritage areas in the by-law: 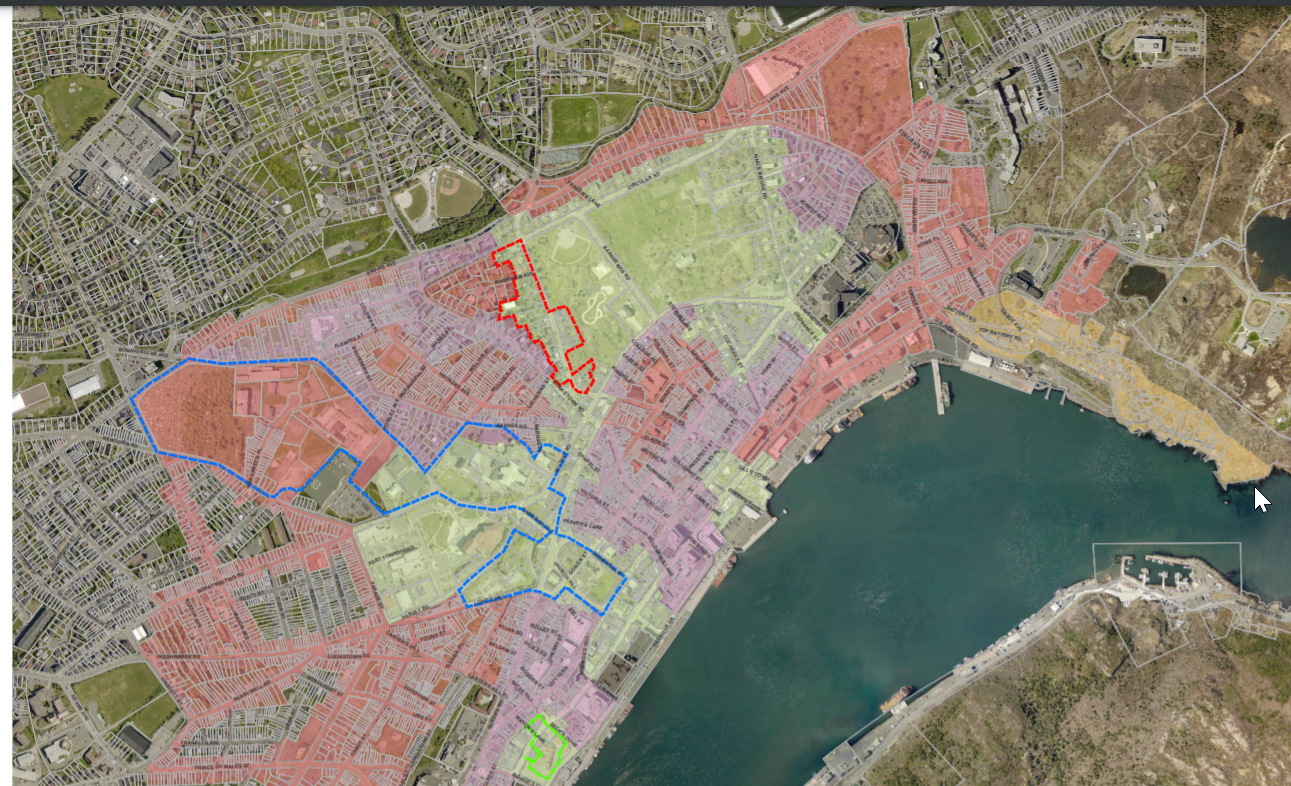 The majority of the heritage areas in question are a mix of Commercial Downtown Mixed and Residential Downtown, with a scattered lot zoned CDM2 and the far west of downtown being Commercial Downtown. The heights in CDM and RD, which are by far most represented in the heritage area, are 18 metres and 8 metres, respectively. CDM2 mostly covers the site-specific height exemptions given by past councils in the former CCM zone, and allows for buildings up to 27 metres, but that proverbial horse is largely already out of the barn as a result of past councils’ failure to follow the regs in the period from 2009-2014 when those exemptions were granted. Commercial Downtown allows for quite tall buildings, to a maximum of 54 metres— again, this would be only for Water St. West and environs, where tall buildings already exist—but anything over 18 metres requires a Land Use Assessment Report to be approved by council. Remember as well that the new by-law would subject any development in the heritage area to public consultation. Council votes to adopt the by-law unanimously.

But Who Needs Regulations, Anyway?

And then with the next item on the agenda they immediately flout it. Introducing the item from Committee of the Whole, Cllr Burton speaks to a recommendation from the Built Heritage Experts Panel concerning siding on 16 George Street. The Heritage regulations require that horizontal siding be installed, the proponent is insistent that only vertical siding will do. In contravention of the by-law as it relates to heritage standards, and going against the recommendation of the BHEP, at COTW the majority of council voted to allow the vertical siding.

Some councillors note that the building currently has vertical siding and that many businesses in the area have facades that are in contravention of the Heritage guidelines. Councillor Burton points out that those Heritage guidelines were brought in after many of those businesses were constructed, and that if they were built today they would not be permitted to be built in that style. The principle is that new buildings should adhere to the current regulations including the by-law literally just a few moments ago passed unanimously by Council.

Cllr Skinner states that the building has had vertical siding for “50 to 70 years” and that the proponent asked for, “a reason for rejection other than it doesn’t adhere to the regulations.” Which Cllr Burton clarifies is not the case; the building has had horizontal, wooden siding since 1999. The argument also implies that “not adhering to the regulations” is not sufficient, which causes one to wonder what exactly is sufficient, if not that. Skinner affirms the need to have a predictable process, but since this developer made a big fuss, he thinks they should probably be inconsistent instead.

Cllr Froude said, “I don’t see this as being pro or against the project, or pro or against economic development as a specific choice within a broader development. I do believe there’s a value in consistency and coherence in by-laws and regulations unless there’s a compelling reason to make an exception. It seems to me this is a subjective preference for the type and orientation [of the siding], so that to me is not sufficient reason to vote against the by-law we passed about 15 minutes ago.”

Cllr Hickman says, ‘I’m looking at it differently. I’m looking at it as to heritage and what it means to the old City of St. John’s. When it comes to horizontal siding, done deal, can’t even waiver.” And yet waiver he does as he goes on to give a list of things that used to go on on George St, and mention, “the date that the Sundance went in there, things started to change.” He commends the proponent for fixing their property and offers his support without linking this back to the issue of heritage.

Comments from Cllr Hanlon, Cllr Korab, and the Mayor also generally fall into the category of, “this doesn’t really matter that much anyway, why are we making such a big deal about it?” The Mayor suggests that, “there is room for a little bit something different in the heritage area.” Which is of course not quite the spirit of the by-law passed only moments before, which sets out very clear standards for heritage areas.

Cllr Burton closes by saying it’s a matter of principle—the City should adhere to its own regulations. Nevertheless the motion to allow the developer to go ahead with vertical siding is carried 7 to 3 with Cllr Froude, Cllr Burton, and Deputy Mayor O’Leary dissenting.

More Culture, Both Yeast and Film

Another matter of heritage at 27 New Gower Street. The former Sundance building is on the agenda as well, which appears to be for something called “Adelaide Motors Brewing Co.”—and, in my inexpert and highly subjective opinion, is extremely cool-looking:

The proposed renovations are approved unanimously with some further details to come back to council at a later date.

Cllr Skinner introduces a number of road closures related to filming as representative on council for the Special Events Regulatory Committee. Skinner notes that this filming will take place overnight and therefore a noise by-law exemption is required. Motion carries unanimously.

Picking Up After Larry

The Mayor begins the go-round by thanking staff, the Fire Department, and other first responders during and in the aftermath of Hurricane Larry, and thanks the public for their co-operation as cleanup continues. Cllr Korab mentions that also as a result the Mews pool will be closed until Wednesday, as will Terra Nova ballfield and those in Bannerman, Bowring and Victoria Parks remain closed for hurricane cleanup. Korab goes on to bring up the 5-year agreement reached with an ABA team ownership group to bring basketball to Mile One. He offers gratitude to Sheena McCrate, CEO of St. John’s Sports and Entertainment, for her proactive approach to offering the Iceberg Alley owners the option of moving operations to Mile One after their tent was totalled by Larry.

She also wonders, “I know that the city’s public works department is working really, really hard to address, obviously, the trees, the branches, and the other tree debris that have come down from the storm, and that we have locations set up now to receive the the trees and and and those kind of debris.” But can residents without trucks get help from the City to remove debris from their properties?

Deputy City Manager of Public Works Lynnann Winsor politely says that the City doesn’t have the resources to help residents with that. The DM encourages neighbours with trucks to help each other out.

Cllr Hanlon wants residents to know their ballots should arrive in the mail this week. Also, she wants everyone to know how very busy candidates are and that there are a lot of surveys to fill out but she will get to them, she says, in due time.

With just two weeks left until the election, this council is riding out its last days. An interesting dynamic is visible: some council members are sure they will be back after October, others are certain they won’t, and some are in the middle trying to assure that they will be, with no guarantees. If you haven’t received your ballot in the mail by the end of this week, make sure you’re on the voters list so that you receive your ballot. For better or for worse, some things will soon change at City Hall; how that happens is up to us all. 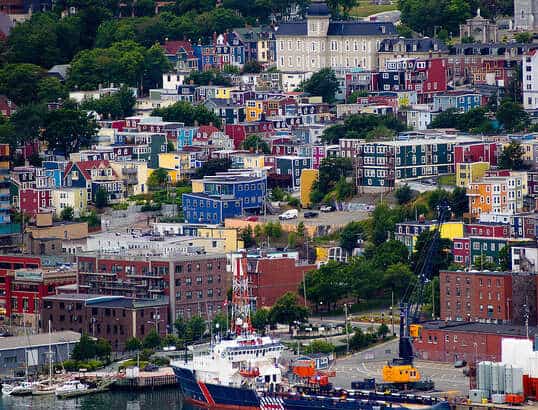