Innu leaders from Labrador took the fight for their children and families to Toronto Saturday when they confronted Minister of Indigenous and Northern Affairs (INAC) Carolyn Bennett at a “Canada Day picnic” the MP hosted in her riding of Toronto—St. Paul’s.

Innu Nation Grand Chief Anastasia Qupee, Deputy Grand Chief Simeon Tshakapesh, Sheshatshiu First Nation Chief Eugene Hart, and Natuashish First Nation Chief Mark Nui challenged Bennett on what they say is the federal government’s inaction on providing the necessary resources to address the crisis of Innu children being taken into state custody and, in many cases, shipped to Newfoundland and other provinces.

The Innu leaders met with Bennett the day before to discuss continued funding for their Placement Capacity Project, an initiative developed by the Innu communities “to allow more Innu children to stay in their own communities, within their language and culture,” according to an Innu Nation press release issued Friday afternoon.

“But all we got are words,” Qupee said in the release. “There were no concrete commitments.”

Addiction and suicide continue to ravage the two Labrador Innu communities, whose people are among the last First Nation hunter-gatherer societies in the north to be forced onto reservations, where their quality of life has rapidly deteriorated under imposed federal and provincial government policies and the subsequent burden of assimilation.

A paper published last year in the American Journal of Public Health claimed suicide rates among Innu in Labrador are 14 times higher than the province’s non-Indigenous population.

One of the report’s authors, Dr. Michael Jong, attributed the suicide epidemic to “colonization, loss of culture, loss of a sense of belonging,” CBC reported.

In May Tshakapesh’s 16-year-old son Thunderheart took his own life after struggling with solvent abuse and being moved out of his community and culture to Central Newfoundland and then Saskatchewan.

On Saturday the deputy grand chief was visibly distressed as he addressed Bennett.

“Stop stealing our children! Stop it!” he shouted. “Something gotta end. We can’t keep burying our own. My son Thunderheart had a dream, and that dream was killed by the system! Thunderheart!” he cried, throwing his fist in the air.

“I want my son back! You don’t know how much pain I’m going to carry the rest of my life.”

There are approximately 1,670 Innu living in Natuashish and Sheshatshiu.

“The Innu proposals would set up five placement facilities within the Innu communities, including a group home certified to the highest standards and level of service under provincial law,” Friday’s Innu Nation release explains. “Innu have been working with an experienced placement facility provider to develop capacity. The Province of Newfoundland & Labrador has expressed strong support for the project.

“The project involves a one-time federal investment of $3.7 million for training and building upgrades; once operational, the Innu placement facilities would run on existing funds through provincial service agreements. INAC funded the first phase of the Project last fiscal year. It was a major success, and trained a team of Innu staff to manage the specialized group home. However, without funding confirmed for the current fiscal year, the trained staff will need to be let go, dashing Innu hopes for progress, and wasting the federal government’s previous investment.

“Proposals for 2017-18 were submitted to INAC several months ago, and have been reviewed with INAC officials in several meetings. But funding remains out of reach.”

Last week Prime Minister Justin Trudeau came under fire after responding to criticism that his government isn’t complying with a human rights tribunal order to increase spending on health and social services for children on reserves by suggesting many communities aren’t prepared for the money.

“We’re ready to invest in you. You just need to tell us how you need it spent, where you’re going to spend it and how you can best help,” he said.

“A lot of Indigenous communities haven’t had the opportunity yet to take that responsibility, to actually think about how they can and must deliver it.”

“Our kids are being removed away from our communities, our kids are not speaking the language when they come home,” Qupee told Bennett. “How can we keep our language? How can we protect our future when they are so far away from us? How can they practice their culture?”

The federal and provincial governments have both committed to implementing the Truth and Reconciliation Commission’s calls to action, which compel the federal and provincial governments to, among other things, provide “adequate resources to enable Aboriginal communities and child-welfare organizations to keep Aboriginal families together where it is safe to do so, and to keep children in culturally appropriate environments, regardless of where they reside.”

Many Innu children taken into state custody are transported to foster homes in Northern Newfoundland, or into rehabilitation facilities in other areas of the province, and even outside the province, as Tshakapesh’s son was.

Both governments have also committed to adopting the United Nations Declaration on the Rights of Indigenous Peoples (UNDRIP), which states “Indigenous peoples have the collective right to live in freedom, peace and security as distinct peoples and shall not be subjected to any act of genocide or any other act of violence, including forcibly removing children of the group to another group.”

Tshakapesh likened the current crisis of Innu youth being removed from their communities to the genocide of Beothuk, an Indigenous group that inhabited the Island portion of the province until the 19th century.

“It already happened in Newfoundland, they wiped out the Beothuks. Now it’s our children…the repetition’s gotta stop!” he said.

“It’s nobody but us that have to see our children [taken away]. Young mothers have given birth and have their babies taken away. We’re not guinea pigs for anybody!

“It has to happen soon or you won’t have anybody here from our people to come and speak up.”

Bennett responded, saying she agrees that Innu and other Indigenous children must remain in their communities and maintain connection to their language and culture.

“We know that children live 20 years less if they’re taken away at birth,” she said. “They need to grow up…with their language and their culture — that’s what the kids need and that’s why the system needs to be totally overhauled. This is not okay that an industry of foster care and agencies are—”

Qupee cut Bennett off, reminding her that the chiefs laid out their case on Friday, “but you gave no commitment to help our kids. And this is why we’re here today, because we’re not going to stop. We’re not stopping.”

Bennett reiterated her statement that Indigenous “communities all across Canada need to look after their own children in their language and culture — that is the changes that have to be made.

“We have to deal with the provinces and territories and tell them that this is unacceptable, and that’s what we’re doing.”

Tshakapesh said the federal government needs to support First Nations directly on child welfare rather than handing the money to the province to operate child and family services in Indigenous communities.

“You’re the ones that are providing the funds to the province, and that’s what the problem is…they’re contributors of this problem,” he said. “The reason why our kids are dying is because of the federal finances [flowing] directly to the province of Newfoundland. That’s why we keep burying our kids. How many more are we going to have to bury?”

Bennett responded: “I want to be a partner in the changes we know need to happen, and that’s what we’re trying to do every day, is to explain it’s unacceptable to take children out of their language and culture. They don’t do well. We know secure personal cultural identity means better health, education, economic outcomes. This has to stop and I want to be a partner with you in those changes.

“The decolonizing has to begin, and is beginning,” she continued. “We have to get you back in charge of child welfare and education.”

“We cannot have Indigenous kids going to non-Indigenous families an ocean away in terms of what the Innu are putting up with in Labrador, and those families in northern Newfoundland,” the minister added.

Hart told Bennett “the only time we’ll get our kids back in our communities is if they passed on,” explaining just last week Sheshatshiu “buried a child that was in care that was seven years old.”

He said the money Innu Nation is asking for to bring its Placement Capacity Project to fruition “is not big, so I don’t know what the big deal is.

“We are losing kids.”

Correction: A previous version of this story stayed there are approximately 2,200 Innu living in the two Innu reservations. The article has been updated to reflect the latest statistics provided by Innu Nation, which show the population to be approximately 1,670. 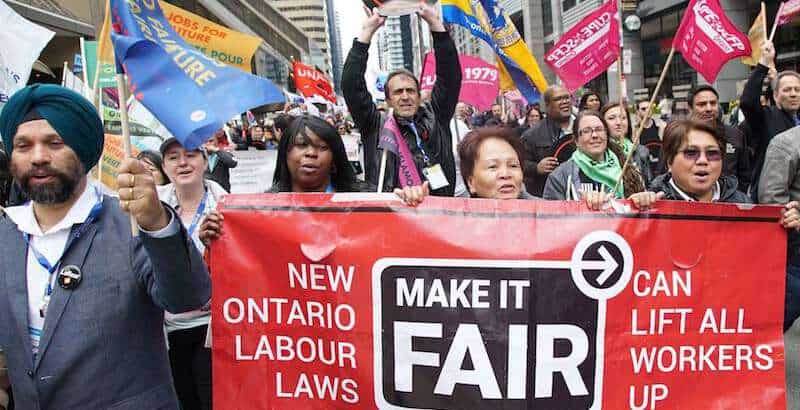 Acknowledging the labour movement on Canada’s 150th
As we acclaim Canada’s builders after 150 years, the vital role of trade unions remains overlooked.

Calls for Nalcor audit, Muskrat inquiry intensify amid ongoing protests
Water levels in the Muskrat Falls reservoir have dropped 60 centimetres since a June 21 commitment from Nalcor that the water would be returned to…