Death of a penguin

Spare a thought for the original penguin, our very own great auk

It may be an ancient language, but Welsh has contributed few words to the lexicon of modern English. Corgi (‘dwarf dog’) is one; gull, from gŵylan (‘the one that wails’) is another. And that’s about it.

There is, however, a second seabird whose name might have an etymology Cymraeg, and it was once one of Newfoundland’s commonest creatures. That bird is the penguin.

“Penguins in Newfoundland?” I hear you splutter incredulously. “What poppycock!” And you’d be right, on one count at least: there aren’t any to be found off our coasts today. Where you’d be wrong is to think there never were, for this is a tale of the original penguin, one that lost its name to a southern hemisphere lookalike, and its life to the unstoppable needs of our own species.

The unfortunate in question is Pinguinus impennis, better known as the great auk. It has been extinct for more than 150 years, yet it remains an iconic creature. Much of this is due to its mystery: a bird that vanished before it had been properly described.

To the Beothuk, great auks were “Apponath,” but the Europeans soon came to know them by a different name. In Welsh, pen gwyn means “white head,” possibly in reference to the large white spot found on the bird’s forehead during the breeding season. The epithet appears to have arisen during the early years of the Newfoundland summer fishery, when many of the visiting seamen spoke Celtic languages, though an alternative hypothesis is that penguin derives from pinguis, the Latin for “fat.”

It might seem odd for a Welsh word to come into use on this side of the Atlantic, but plenty of Newfoundland’s pioneer settlers were from that country. William Vaughan led the way, turning the southern part of the Avalon into Cambriol, or “little Wales,” as shown in John Mason’s early 17th Century map of the island.

When visited in 1534 by the French explorer Jacques Cartier, the place was staggering, both in the sheer number of birds, and the acrid smell of seabird guano. This is the funk from which the modern name comes, but the French dubbed it simply L’Isle des Oiseaux.

It is now home to around a million common murres, not to mention gannets, puffins and kittiwakes, but it was the great auks of Funk Island that really caught the eye. They were so numerous and so docile, Cartier wrote, that they could be herded and driven into boats “ainsi que moutons à la boucherie.”

The great auk was simply a resource to be tapped by the motherland.

Once the English got wind of this, through translations of Cartier’s voyages, there were strong petitions for the proper colonization of Newfoundland, with great auks described as a food source better than geese.

Eventually, after half a century of dithering, Humphrey Gilbert was sent to accomplish the task, and claimed the colony for Queen Elizabeth. Soon, the penguins were being fully exploited. Used first for fishing bait and fresh meat for sailors, and then for their fat and feathers, the great auk was simply a resource to be tapped by the motherland. Newfoundland in miniature, if you like.

It wasn’t just Funk Island that drew the crowds; great auks were found abundantly on Bird Rocks in the Gulf of St Lawrence, whilst their penguin-prefixed place names attest to various smaller islands having had colonies too.

With no firearms required, it was a cheap job to slaughter the birds, and also lucrative. In his book Who Killed the Great Auk?, Jeremy Gaskell notes that, in terms of monies earned, a few days’ penguin-bashing “was equivalent to many weeks spent out at sea fishing for cod.”

By the late 18th century, George Cartwright was raising serious concerns about the species’ imminent annihilation, with Funk Island now its only breeding colony. As a consequence, the first seabird protection legislation in the western world was introduced in 1786, with penguin-poaching punishable by public flogging.

Introducing the law was one thing, though, and enforcing it was another, and it had minimal effect. The demand for feathers was too great, and the penguins too easy to capture. And even if it had been rigorously enforced, it was probably too little too late.

Some hunters were utterly honest about their auk abuse. “You do not give yourself the trouble of killing them,” declared Aaron Thomas of HMS Boston in 1794, “but lay hold of one and pluck off the best of the feathers. Then you turn the poor penguin adrift, with his skin half naked and torn off, to perish at his leasure [sic].”

And perish the penguins did. A handful of years later, they had gone from Funk Island. In two centuries of astonishing plunder, a population of hundreds of thousands of great auks had been wiped off the Newfoundland map. Elsewhere in the Atlantic, a few stragglers clung on, but not for much longer.

In British waters, the last great auk was killed in 1840, blamed as a storm-causing witch, and the final recorded breeding pair were strangled on Eldey, Iceland, in 1844. The terminal, verifiable sighting of a great auk was in 1852, on the Grand Banks,  and then the species swam off into oblivion.

The name lived on, having been applied in taxonomic confusion to the similar-looking (though unrelated) avians of the Southern Hemisphere, but the original penguin was gone. And now you’d never know that Newfoundland was its home.

As if to demonstrate this, there are two stuffed great auks in the Yorkshire Museum in York, where I currently live, but not a single specimen in a provincial collection. The closest you’ll get is to visit The Rooms (www.therooms.ca) and see one reconstructed from Funk Island bones.

So next time you see a gentoo, a rockhopper or a jackass hogging the flightless limelight, remember their Welsh-Newfoundland heritage. And spare a thought for the penguin that never made it. 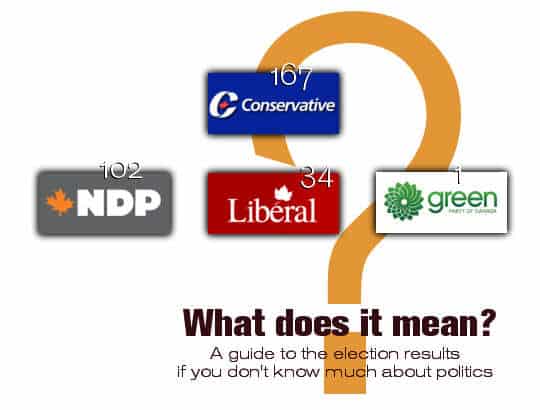 What does it all mean?
TheIndependent.ca boils down for you the FIVE big stories to come out of this historical election campaign, and what they mean for politics in Canada.