For thousands of years, the Baie Verte Peninsula has proven very rich in mineral pickings. Such a concentration of strange and valuable commodities in a small area invites the inevitable question: why?

In a northern cove, across a grassy hollow, there stands a pock-marked rock face. An irregular grid of squarish markings is etched into the grey-green surface.

Ignore for a moment the modern information boards and have a wonder. Imagine yourself the first sailor to step onto dry land in the bay and see these shapes. What are they? Why are they there? Are they graffiti? A mysterious sculpture? The playing surface for a long-forgotten game?

Whatever they interpreted them as, the incomers who first saw the features at Fleur de Lys must have guessed they were ancient. The impressions just look as though they’ve been there forever.

No one was able to prove their origins ’til the late 20th Century, however. The answers came courtesy of an archaeological research team who showed that this secluded corner of outport Newfoundland was a place of true historical importance. The curious carvings were where stone had been worked free from the cliff; the Baie Verte Peninsula had been home to some of North America’s first miners.

As a consequence, Fleur de Lys is now recognized as the Dorset Soapstone Quarry National Historic Site. Two phases of excavation have been identified: the first one by the Maritime Archaic people, around 4,000 years ago, the second by the Middle Dorset Palaeoeskimos, between 1,800 and 1,200 years ago.

I was slightly non-plussed when I first saw the latter’s name. I knew many early settlers had come from the county of Dorset in southwest England, but the idea that Aboriginal North Americans had come from there too was ridiculous to countenance.

Thankfully, a more informed colleague was able to explain that the Dorset Palaeoeskimos were named after Cape Dorset, just southwest of Baffin Island, where the earliest evidence of their culture had been unearthed. My thoughts of scrumpy-drinking yokels as Arctic pioneers were swiftly dashed.

The reason the prehistoric explorers homed in on Fleur de Lys was because of its unusual geology. A coastal exposure of soapstone provided them with a material that could be easily quarried by hand and worked into bowls, pots and lamps.

These soft rock products were mostly used locally, but items made from Fleur de Lys soapstone have turned up elsewhere in the province, suggesting some transport and trading of objects.

The ancient miners were the trendsetters, but the Baie Verte Peninsula has subsequently proven to be very rich in mineral pickings. Baie Verte itself has asbestos to thank for its mid-20th Century growth, whilst in the eerily beautiful Tilt Cove – now home to just a handful of hardy residents – the discovery of copper a century earlier turned it into a boom town.

Copper is still of interest in the Ming area, and pockets of gold have turned up in a number of places around the peninsula. The mining rush may not be over yet.

Such a concentration of strange and valuable commodities in a small area invites the inevitable question: why?

For an explanation, we have to return to the old lost sea of a previous article. The rocks of the Baie Verte Peninsula are the cooked and mangled remnants of a very old chain of submarine volcanoes.

They were formed – and then consumed – during the closure of the Iapetus Ocean, the precursor to today’s Atlantic. Gros Morne may show off his exposed innards most graphically, but Iapetus’ death throes can be seen across the whole of Newfoundland.

Beneath Baie Verte, in the chaotic mix of magma, mantle and seawater, chemical-rich fluids swirled up into the crust, depositing minerals as they went. The soapstone – more properly known as steatite – was the product of very iron-rich volcanic rocks being chemically altered by hot subterranean waters.

In such conditions, the mineral talc is produced, giving the eventually-cooled rock a smooth, almost greasy malleability, perfect for fashioning into portable utensils.

A View To Achill

Seemingly almost as well-fashioned is the structure that forms the coastline east of Fleur de Lys before carving inland to Flatwater Pond. It has long, long been dormant, but the Baie Verte Line is a fault, a vast crack in the Earth’s crust marking the edge of Laurentia, or ancient North America. When the Iapetus Ocean closed, this was the suture.

More startlingly, perhaps, and again linking the province’s geology with its history, Earth scientists have now shown that the very same line also marks a major tectonic boundary in Ireland.

In the windswept western wilderness of Achill Island, County Mayo, where an advertizing board for a Bonavista MP once washed up as driftwood, the Baie Verte Line begins again on the wrong side of the Atlantic.

Off through the north-west of Ireland the fault zone then runs, across the Irish Sea, and thence on to Scotland, becoming the Highland Boundary Fault, the southern edge of the Caledonian mountains. Far-flung from Fleur de Lys now, these regions were once all conjoined, only to be torn apart when the Atlantic opened.

I cannot imagine what the Dorset Palaeoeskimos would have made of these discoveries. It’s probably pointless to speculate. They’d have probably felt at home in western Ireland, though. A few miles south-west of Achill lies Inishbofin, and more than a millennium ago, people there were quarrying the local rock too. Yes, it was soapstone. 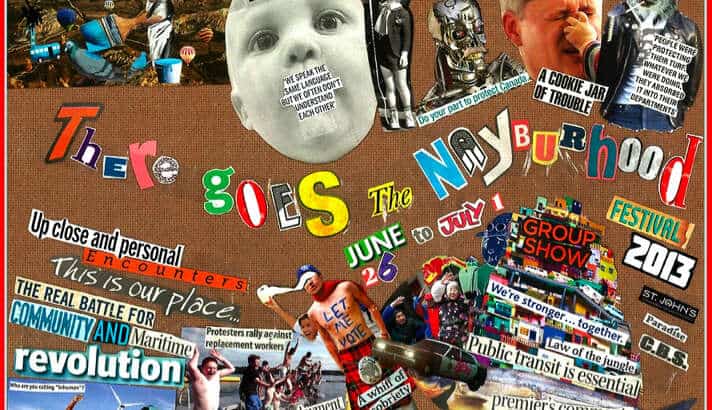 Art for the common good
Organizers of a new arts and social justice festival called 'There Goes The Nayburhood' are hoping to inspire inclusion and positive change in St. John's.

Older workers have fallen behind in the boom
Not everyone is benefiting from the province's strong economy. Here are a few things to consider as we ask why middle-aged workers, particularly those outside…