No mink left to sea

The remarkable story of a now-extinct resident of the island

If there’s one thing studying the fossil record tells you, it’s that most things that have ever lived on Earth are now deceased. Most have been deceased for an extremely long time.

It would seem easy, then, for palaeontologists like me to become morbidly depressed. All those piles of bones and shells, all those vanished animals, all that death.

Far from it. I find fossils simply wondrous. Yes, they are corpses, but they are also bodies of evidence for interrogating life through time. Why did some lineages thrive for aeons and others only briefly? What drove animal groups to evolve the way they did? What makes a successful species?

In some fashion, all living animals are also fossils. Each of us is an ancient survivor, a genetic record of countless generations of individuals that managed to beat the odds and successfully raise offspring. We are all billions of years old.

You might think, for example, that dinosaurs are extinct. They’re not. You see them every day, as birds. Thanks to new fossil discoveries we know that theropods – the reptile group that included Velociraptor and Tyrannosaurus – evolved feathers in the Jurassic. Countless species of these innovators kicked the bucket later, but countless others lived on. So now, every time you gaze at a pigeon or a gull or a puffin, you’re gazing at a dinosaur survivor.

La Manche Provincial Park has a noteworthy array of such creatures: more than 50 species of bird have been observed there. The first time I stepped down into the secluded gully where La Manche village used to be, I startled a pair of bald eagles into sudden flight. Fast predators = veloci-raptors! It’s easy to see their ancestry.

The most enlightening trip I’ve made there though was one autumn a couple of years back. Standing on the suspension bridge that links the East Coast Trail stunningly across the sleeve-shaped inlet from which La Manche takes its name, I saw an animal sitting on the rocks below. At first I thought it was a seal, but my eyesight is notoriously dodgy and I realized it was too small.

I stood and watched from the bridge, called my friends over, and we soon worked out it was an otter. A moment later it was joined by a companion, then another, then another. A whole family group materialized below us. As if they knew they had spectators, the troupe then began putting on a show: scampering, diving, swimming, play-fighting. Our planned hike along the trail was temporarily abandoned.

As I watched with amusement, I found myself wondering about their origins, suspecting that otters were mustelids, but not being quite certain. Back home, a bit of research confirmed this. H2O may be their preferred medium, but river otters are close relatives of land mammals such as badgers, martens and wolverines. They’re water weasels, if you like.

American mink are the other aquatic mustelids native to the province, though the Newfoundland population is thought to be derived from fur farm escapees. What I had no idea about, until I stumbled across it online, is that there may well have been a third: a mysterious creature whose story is of (geologically) brief success and even briefer disappearance.

Rise and fall of the sea mink

“Exterminated before it was even recognized as a distinct species,” according to palaeontologist Jim Mead of Northern Arizona University, Flagstaff, that animal is (or was) the sea mink.

Neovison macrodon, as it is now known, was up to twice the size of the American mink and had much bigger teeth, hence its specific name. Perhaps most importantly in its tale, it had a lustrous, rusty reddish coat.

As a consequence, it was hunted into extinction in the late 19th Century. So rapid was its elimination that not a single complete skeleton (or pelt) exists in a museum collection anywhere. For information on what it looked like, we are entirely dependent on piecing it together from the fossil record.

Mead’s research on animal bones in Native American archaeological sites along the coast of Maine shows that the sea mink lived in island habitats with a rich food supply.

The oldest specimens known are about 5,000 years old, so it seems the sea mink evolved rapidly after the end of the last Ice Age. Rising sea levels from the glacial mass melt created new marine habitats, not least where flooded coastal hills became separate islands. A group of previously land-dwelling mustelids might have seized this opportunity. It is also possible the sea mink’s ancestors came from further south, migrating into north-east coastal habitats as the ice sheets receded.

The shape and structure of the sea mink’s large teeth indicates it fed on harder foodstuffs – crabs, shellfish, birds’ eggs – than its relatives. Dietary preference could have been a key driver in its evolution.

Having found its niche, the sea mink seems to have been a successful, solitary hunter. However, feeding specialism and restricted habitat size makes a species vulnerable to sudden change. For the sea mink, that change was anthropogenic.

Reconstructing an extinct species’ population numbers is difficult, so it’s hard to know how sensitive the sea mink was to human exploitation.  Native Americans certainly hunted it – the middens of the Maine coast prove this – but the long-term records indicate this occurred over thousands of years, suggesting human predation pressure was broadly sustainable.

Its elimination in the 19th Century coincides clearly with a new demand: the European fur trade.  Large animals with distinctive coats were always going to be attractive to trappers, and in the palaeontological blink of an eye the sea mink’s fate was sealed. It was extinct by the late 1800s.

So, could we ever have admired sea mink in Newfoundland?  The species certainly lived in Nova Scotia and New Brunswick, and with its swimming ability, not to mention the spring sea ice, it could surely have made forays across to the province. No remains have ever been found here though; further research is required to clarify just where N. macrodon made its home.

Further research is also useful more broadly. As sea levels now rise, the same processes will happen all over again. Some habitats will vanish, some will be created. Some species will die out, some will evolve.

We, however, add a uniquely modern slant to this ancient process. Only humans can study the past to predict the future, and only humans can examine our own impacts. If we do so, we can perhaps ensure that no other Canadian mammal suffers the fate of the unfortunate sea mink.

Telling other people’s stories
Back with her short but impressive third effort, 'On Personhood', Halifax songwriter Gianna Lauren will unveil her new songs to audiences in St. John's Thursday… 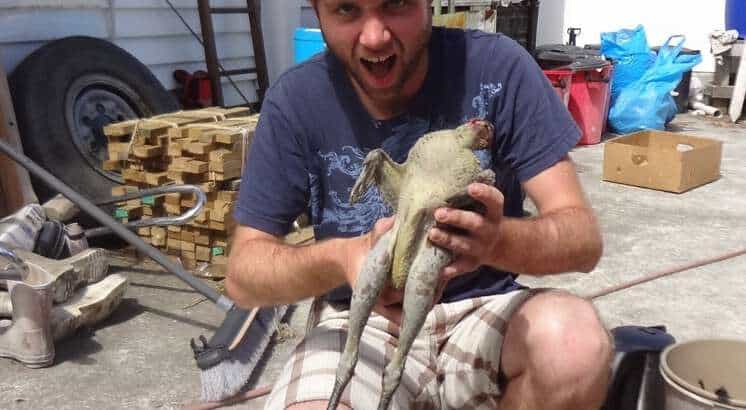