So, as I discussed last time, oil companies think we should invest provincial hydrocarbon revenues in renewable energy sources, whilst Premier Dunderdale tells us that the new Muskrat Falls hydroelectric project “will help support the development of wind power.”

The province is moving in an encouraging direction, it seems, with an integrated, renewable energy policy meeting the province’s needs and generating a significant surplus. The NL Energy Plan says we need 2400 MW per year ourselves, but that we have the potential to generate more than seven times that figure.

We should be cautious about trusting these data – the mysterious blue “Others” column in figure 2.1 of the Energy Plan is rather baffling, for example – but instinctively I find myself saying “Hurrah!”

Turning black gold into green power sounds not only colourful but highly wise. The province could start leading the world in enlightened energy production.

But then I look into things more closely and realize I should be tempering my hurrah with a however.

For although it might appear that renewable power is clean and good, and that fossil fuels are dirty and bad, it is, to paraphrase science writer Ben Goldacre, a bit more complicated than that. Concerns are often raised about the environmental impact of dams, reservoirs and wind farms, whether upon forests, fish or flying creatures.

What is less well-known is that building the devices themselves is dependent on non-renewable entities called rare earth elements, and that they are currently sourced almost entirely from mines of the very dodgiest kind.

The rare earth elements, or REEs, consist of 14 “lanthanides” and three closely related elements, and, despite their name, are actually quite common. The reason for the “rare” tag is because they are infrequently found as economically viable mineral deposits; until recently it was also difficult to extract them efficiently.

REEs are metals with similar chemical properties, being soft, malleable and usually reactive. They also have high conductivity, high melting points, and are strongly magnetic, which means they can be made into magnetic alloys that offer highly efficient performance. As a consequence, they are critical to a vast array of modern energy-saving devices, from rechargeable batteries to fluorescent lamps to catalytic convertors.

They also enable products like disc drives, flat screen televisions, and cellphones to be made smaller and lighter. If you’ve ever wondered why electronic items keep on getting Lilliputian, you’ve rare earth elements to thank.

Most valuable of all are the “heavy” REEs, such as neodymium (Nd) and dysprosium (Dy), which are, perhaps inevitably, the rarest: dysprosium takes its name from the Greek, dysprositos, meaning “hard to get at.” These heavyweights offer the highest ratio of power to mass, enabling magnets that contain them to be small, but to perform well under high stress conditions.

So when it comes to generating power, and you want the most bang for your buck, you need “heavy” REEs, which is why they are now a critical component of nuclear reactors, hybrid electric car engines, and wind turbines. The quantities aren’t insignificant either: an average wind turbine uses around 300 kilograms of Nd.

This is all well and good. You can’t get power without building some kind of generator, and rare earth elements are a very energy efficient means of doing this. Unfortunately, there is a catch, and it’s not the fact that they’re non-renewable. The global reserves of REEs are significantly greater than the current demand, and even with continued growth, sourcing them should not be an issue. What is a problem is where we source them from.

The conundrum we face was summed up neatly by Don Burbar, chief executive of Avalon Rare Metals, in an interview with The Times in 2009. “The crux of the matter,” explained Burbar, “is that there are now a lot of technologies that can’t work without rare earths, and China is currently in effective control of the global supply. China has positioned itself to retain control, and meanwhile politicians around the world do not appreciate how the supply side of green technology works.”

Obtaining REEs from China isn’t automatically a bad thing, but reports have raised a large number of serious issues, from low wages, to the illegal smuggling of REEs, to radioactive pollution and the poisoning of local residents. Furthermore, most of the energy used in Chinese REE processing comes from coal-fired power stations. Though regulation is increasing, the industry is certainly not environmentally friendly.

Why don’t we go elsewhere for our REE needs, then? Well, sadly, the world has let China slowly take a stranglehold and it now supplies almost 97 per cent of the global market, thanks to its ability to keep prices low. There are almost no other doors to knock on.

What China does not have, however, is control of the rocks that contain REEs in economic quantities, and one of the regions that could help break this monopoly is this very province. The latest geological research indicates that there are large reserves, especially in Labrador, and that some of these are dysprosium-rich. Given the value of this element, and the almost total control of its supply by China, a new source would be of global importance.

Exploration is in its early days, and many of the scientists and prospectors involved are reluctant to speak publicly, but things are undoubtedly hotting up. Jim Clucas, president of Search Minerals, recently described Port Hope Simpson, south-eastern Labrador, as “the largest new district for REE potential in North America.”

His company is also interested in the Red Wine prospect of west-central Labrador, whilst Rare Earth Metals Inc. is exploring the adjacent Red Wine/Letitia Lake region, and will begin drilling there in June.

Exploration is also going on in Newfoundland, with Bottom Brook in western Newfoundland, and the Cross Hills near Grand Le Pierre attracting particular interest.

Most exciting of all, mineralogically, is the Strange Lake prospect on the QC-NL border. It is enriched in the heavier REEs, and, according to one geologist I spoke to, has the potential to be a world-class resource, with the main deposit on the Labrador side of the border. Of course, this guarantees the machinations of geographical politics, which, when coupled with its remote location, might ensure it never gets mined.

“Strange Lake has the geology to supply REEs for the entire global market,” a senior exploration expert told me, “[but] I don’t give them good odds to solve all the other problems and actually produce any REE, at least not quickly enough to actually capture any of the future market. This is why less advanced prospects like those at Red Wine and in Port Hope Simpson have a good chance of advancing to REE production.”

Such is the difference between discovery and viability, but what if none of these projects take off?  If we have to continue relying on Chinese REEs, should we have second thoughts about wind power?

As anyone who understands the Second Law of Thermodynamics will tell you, truly renewable energy is impossible. “You cannot,” to quote C. P. Snow’s succinct summary, “break even.” But what you can do, with an integrated power policy, is break the stranglehold of short-termism, and away from volatile power supplies.

Cleaner, greener energy is the way to go. It is unquestionably better to use energy sources that are, on a human timescale at least, unlimited, rather than fuels that so patently aren’t. We just need to make sure we’ve considered the implications of our chosen path fully. Nothing is black or white in the world of green energy, everything is tinged with grey: studies have argued that hydro-electric power generation can have a huge carbon footprint.

Similarly, though wind turbines may not be perfectly efficient, using that as an argument against them is like saying that the car was a ridiculous invention because the Model T Ford was so slow and fuel-guzzling. Technologies will improve if the investment is there, and only a fool would find an excuse not to exploit such an obvious energy source.

And in fact, whichever side of the political divide you fall, the mining of REEs in Labrador should get your whole-hearted support: if you’re an environmentalist, it will mean you get wind turbines and hybrid cars, and if you’re a materialist you’ll get flatter screen televisions and even tinier cellphones.  One way or another, everyone’s future would be super-powered. 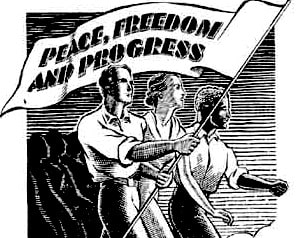