The revolution will not be broadcast

The courage of one MHA has brought the Liberals to a tipping point at precisely the moment the people of Newfoundland and Labrador have united and found their collective voice. So where’s the coverage?

A hero now to thousands of Newfoundlanders and Labradorians, and a pariah to Liberal elites, partisans and pundits. Paul Lane’s actions on Wednesday in the provincial legislature and their implications and consequences deserve every bit of time they will be given in the coming days. But don’t expect too much from the media when it comes to context and substance.

While journalists and pundits are likely to focus on the political drama (this tweet is just a preview)  that will unfold following the Mount Pearl–Southlands MHA’s banishment from the Liberal caucus after Lane heeded his constituents’ concerns and broke ranks in opposing Education Minister Dale Kirby’s ‘re-engineering’ of a private members’ motion by NDP MHA Lorraine Michael that called for the elimination of the Deficit Reduction Levy — there is indeed a bigger, more important narrative unfolding here.

Since the budget was handed down on April 14 a grassroots anti-austerity movement has swept across the province, with thousands of people joining the call for Premier Dwight Ball, Finance Minister Cathy Bennett and the rest of the Liberal caucus to go back to the drawing board and find less socially and economically destructive ways to address the province’s almost $2 billion deficit.

During that time a discussion emerged over the history and nature of confidence votes. Political scientists and journalists alike have maintained that in our Westminster parliamentary system elected officials cannot vote against their own party’s budget without then having to leave the party or be “immediately…kicked out of the caucus,” as CBC’s Peter Cowan wrote last month.

Likewise presented with an opportunity to delve further into the issue, Telegram reporter James McLeod instead opted to stick with the ‘he said, she said’ style and quality of reporting that has come to dominate mainstream media coverage of society and politics.

The media’s refusal to question the merits of our current system of governance and explore ideas and alternatives being put forth by an unprecedentedly—at least in recent history—politically engaged public, is quite frankly stifling social and political progress in our province. Instead, local news outlets are opting for the ‘objective’ empirical-observation approach in their reportage, which indeed reveals they are actually not objective at all.

At a time when fundamental questions about our democracy are actually penetrating mainstream consciousness, and while few would disagree that we need greater interest in and discussion around our political system and the future of our province, news outlets like the CBC and The Telegram have directed public discourse toward deterministic and antiquated conclusions that say to readers, ‘This is just the way things are, and any attempt to change the system for the better is crazy-talk.’ One could be forgiven for feeling a sense of helplessness, and hopelessness, after reading such lazy and unimaginative journalism.

Such articles and their regurgitated perspectives not only serve to uphold anachronistic top-down models of ‘democratic’ governance, but in fact help create the social and political conditions necessary for someone like Dwight Ball—who has not been listening or demonstrating any kind of adequate understanding of the people’s concerns over his budget—to take the supposedly inevitable step of kicking someone out of a party caucus because they advocated for and embodied healthier democratic principles and practices.

Paul Lane’s decision to risk losing his place in the governing party to respect his constituents’ wishes, while simultaneously providing leadership and laying a path for other Liberal MHAs who are likewise concerned about their complicity in passing a budget that will hurt vulnerable people and potentially ‘kill’ the provincial economy, is nothing short of political heroism in this day and age.

And Newfoundlanders and Labradorians are already recognizing this in showing their gratitude for his act of courage.

Prior to being booted from the Liberal caucus by email late Thursday morning, Lane told VOCM that the decision on whether or not he would remain a Liberal after representing his constituents was “in the premier’s hands.

“I think it would be great for democracy if it could be recognized that a member could actually stand up and speak on behalf of his constituents without sanction,” Lane said early Thursday morning, explaining he hadn’t yet spoken with Ball or any cabinet ministers. “But that’s up to the premier to decide, and whenever he decides then I guess that will be it, and I will continue to serve the people of my district to the best of my ability for the next three and a half years regardless of where I’m sitting.”

Likewise, in an interview with CBC, Lane said it would be a “sad day for democracy” when an elected politician would be “kicked out a particular party or caucus because they actually voted their conscience and voted with the people of their district.

“But we do understand that that’s generally how things work,” he continued, “and if that should be the case, and I have to sit over by myself in the corner somewhere on the other side, then so be it. I will continue to represent the people of my district to the best of my ability as I always have.”

There you go — Lane even said it himself: It’s ‘understood’ that punishment for siding with one’s constituents in a confidence vote — even under a threat as serious as the one presented by Budget 2016 — is “generally how things work.”

The effect of this embedded view that failed political systems are difficult or impossible to change is serious. But it’s not as enormous as politicians and some academics and journalists make it out to be. Just ask the hundreds of people who are showing up in small communities to protest library closures and cuts to other important social services how tangible change is during and after a demonstration. Ask the 2,000 to 3,000 people who flooded the steps of Confederation Building two weeks ago how close we are to political revolution in Newfoundland and Labrador.

I  think it would be great for democracy if it could be recognized that a member could actually stand up and speak on behalf of his constituents without sanction. — Paul Lane

Members of the media will comment that it was ‘no big surprise’ Lane was kicked out of the Liberal caucus. They will derail meaningful discussion about democratic and economic reform in the face of a clearly defective and oppressive political process and system. They will probably respond to this column with disdain for the author and the publication, as will political partisans who will fight to the end to protect their party’s dignity — even though that dignity has already been self-relinquished.

All of this leads us to reasonably conclude that this incredible movement that’s building at a pivotal moment in the province’s history will require the people to not only resist the outdated and regressive customs of our failed democracy and refuse to accept the words of those elected officials who fight to uphold the status quo, but also to reject the narrative presented by mainstream media which tells us, ‘Change is not possible. Revolution is not possible. Newfoundland and Labrador is doomed forever.’

More on that tomorrow. In the meantime, drop Paul Lane a line to offer your support for his courage in playing no small part in a province-wide effort to change how we do politics in this province.

And if you haven’t already, read Hans Rollmann’s recent column “Budget 2016: Keeping up the pressure,” which argues it’s not too late to stop this budget if we continue to let our own MHAs know how we feel about it while fostering the grassroots movement that is empowering thousands of Newfoundlanders and Labradorians to collectively determine what our future together in our great province will look like.

Make no mistake, though Dwight Ball is making every effort to create the illusion of control within his caucus, there are Liberal MHAs who at this very moment are deliberating whether to follow in Lane’s footsteps. They know that not only their own futures in politics, but also the very future of our province, depend on them doing the right thing.

With the Liberal Party at a tipping point, this is a very significant moment for our province. The next Liberal MHA who vows to oppose the budget could well open the floodgates of revolt within the party. Together, the people of Newfoundland and Labrador and those elected officials who believe in the fundamental principles of democracy can reverse the disastrous course we’re on.

Just don’t expect the media to tell you that.

Correction: An earlier version of this article stated political scientists and journalists have suggested elected officials cannot vote against their own budget, and if they do they will be kicked out of their caucus. This has been corrected to more accurately reflect what has been said: that while elected officials can technically vote against their own budget, they cannot do so without then having to leave the caucus against or at their own will.

Open letter to Paul Lane
"Your decisions Wednesday have stoked the flames and given the movement courage and hope." 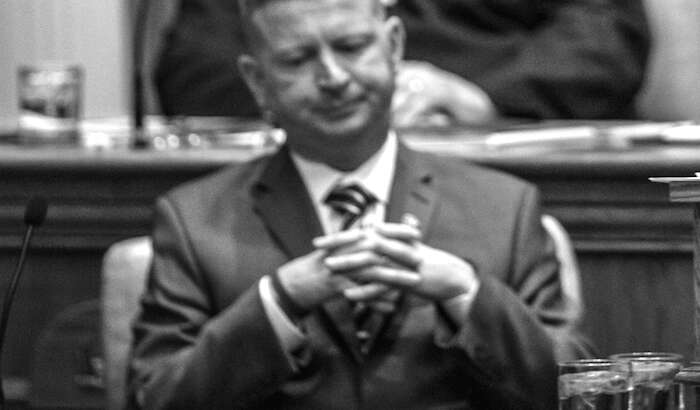