Skip to content
NL Election 2011To Each Their Own

New survey paints a grim picture for childcare in this province

With the flood of provincial election coverage, it can be hard for the average voter to keep track of everything that’s going on (which is why TheIndependent.ca provides handy-dandy weekly roundups).

But one little piece of news that shouldn’t get lost in the wash is a press release that came out earlier this week.

I’m hoping the media gives this bit of news the attention it deserves. It may not have the glamourous colour of orange crush, blue wave, or…um…red splatter? Nor does it have the scintillating aura of scandal that keeps drawing reporters, like so many zombies stumbling around after a feed of brains, to Danny Williams’ latest dig of the week against Kathy Dunderdale.

But it might very well be one of the most important issues of the election.

The Vector Poll – commissioned by CUPE Newfoundland and Labrador, which represents a number of unionized childcare workers – surveyed the province’s voters about their views on child care; but perhaps more importantly, it surveyed them about their experiences with child care, as well. And it painted the most graphic picture yet of just how big a childcare crisis this province is beginning to face.

CUPE’s press release summarizes some of the findings:

“86 per cent of respondents are using relatives to provide care, while 65 per cent are using a babysitter. In sharp contrast to this, only 30 per cent of families are using a child care centre…One third of parents and guardians (33 per cent) who have young children say they recently had problems finding someone to look after children who live with them…Two thirds (65 per cent) of parents who use child care facilities pay $500 or more a month – 22 per cent pay $1,000 and up. Parents using home-based child care arrangements are paying more for child care – $786 a month on average versus $707 for parents using child care centres. This may be due partly to subsidies provided at centres.”

Numerically, the survey results extrapolate into 24,000 young children in this province for whom childcare provision is uncertain and precarious.

And that’s a whole lot of children.

Cost is a huge problem. 32% of provincial households with annual incomes between $50,000-$100,000 found difficulty arranging childcare due to the cost. What costs are we talking? Figures range from $500 to $1000 a month. That’s more than some of my friends pay in rent each month. And of course, double your children, double your trouble. Furthermore, cost – and access – varies throughout the island and Labrador, especially from urban to rural settings.

And the survey shows that the province’s parents and guardians are quite clear about what they want done about it. 89% said they support a government early learning and child care system; even more dramatically, 71% are ok if their taxes go up in order to pay for it.

Don’t like kids? Great! Cuz it’s an economic win too!

Now somewhere out there, there’s a cynical anti-child reader who’s writhing in anger, clutching their portrait of Ronald Reagan and uttering a prayer to the spirit of free market economics which goes something like: “I don’t want MY taxes rising in order to provide quality childcare for children!”

Which is fine! Because if you don’t care about the children, maybe you care about the economy. The lack of a decent public childcare system in this province is growing into one of the greatest threats to our ability to produce a strong labour force to meet growing demands. And I’m not talking about the children – I’m talking about their parents. Without a public childcare system, parents with much-needed skills are forced to either stay at home looking after children themselves, or to take part-time jobs, often outside their area of skill and training. Instead of both parents being able to work good jobs and contribute to the economy (and earn money to support their family and reinvest in the economy), one parent has to stay home while the other works during the day, and then often the other parent will go to work in the evening, night or weekend when the other parent is off work. All this is, of course, for those families which have two parents – imagine the challenges a single parent faces with half the potential resources! The survey shows that a quarter of parents in the paid workforce in this province with children under 13 at home wind up working non-standard hours. Most of them are mothers. Part time workers – 9 out of 10 part-time workers with children are women – are the ones most likely to report that they could not find access to quality local childcare services.

So here’s the crux: we have a growing economy that’s starting to experience a labour and skills crisis that is beginning to restrict our ability to grow to full potential. At the same time, 54% of part-time working parents say they would prefer to work full-time if childcare was available: “According to the poll, 25% of Newfoundland and Labrador parents with young children say in the past two years or so they or someone in their household put off seeking a paid job, accepting a job or taking job training because they could not make suitable child care arrangements and ‘had to stay home to look after a child’.”

Add another child and the number of parents declining work or training opportunities rises by 10%.

So here’s the deal: we got tens of thousands of parents who can’t afford childcare and who are being kept out of the workforce against their wishes. We have a growing economy that’s being held back because of growing skills and labour shortages in some areas. The very ones who most need to be able to share in the province’s growing wealth – parents wanting to earn money to spend on providing a worthy upbringing for their child – are being thrust into precarious part-time work in non-standard hours, just to make ends meet.

There’s very little about this whole situation that is even remotely rational.

A final word needs to be said about the growing role of corporate child care. Or rather, two words, and they are: not good. Even beyond the fact that researchers have found not-for-profit childcare centres in Atlantic Canada scored higher on the Early Childhood Environment Rating Scale than for-profit centres in all four Atlantic provinces, there’s a bigger danger on the horizon. Growing numbers of what’s referred to as corporate “big-box daycare” are trying to establish a presence in Canada. These are large corporate chains that often buy out local independent operators, create a monopoly and build mega-centres for hundreds of children. It’s basically the Wal-Mart strategy, applied to daycare.

Would you want Wal-Mart looking after your child?

Would you want Wal-Mart looking after your child?

And since governments all too rarely learn from the lessons of history, corporate childcare chains have started quietly buying up land and centres in Canada too. The Edleun Group – some of whose chief executives were also involved in the failed Australian childcare empire – has announced plans to open several centres in British Columbia and Calgary, and stated its intention to gain control of at least 10% of the childcare market in this country.

Now while the federal Conservative government is unlikely to do anything to stop them, the fact is that provinces play a role in licensing childcare operators. They could pass laws restricting or controlling the presence of corporate childcare in the province. Just like the Edmonton school board, which earlier this summer announced a policy forbidding the lease of school board space to corporate childcare operators.

Anyhow, let’s start talking about childcare. A proper childcare strategy will not only benefit our economy, benefit our parents, and benefit our children, but it can help to make this province even more attractive to the skilled workers we need to recruit. Making post-secondary education accessible brought tens of thousands of students to this province: imagine what an accessible, public, universal childcare system in this province would do! As somebody who’s been forced to spend time in Ontario, I had work colleagues who literally decided to leave that province simply because they couldn’t afford – or find – childcare. Their loss could be our gain.

Either way, spread the word. And, you know, save the children. 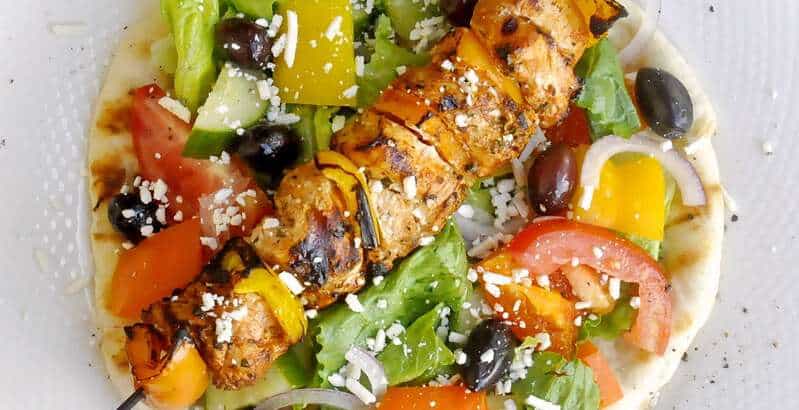 Chicken Souvlaki with Lemon Mint Tzatziki
This particular souvlaki and tzatziki was definitely one of the best meals I've had this summer and I'm already craving more.