Austerity hurts women, so we must shape our response accordingly

We can no longer be outraged that the budget will hit the poor the hardest, while ignoring the fact that the majority of the poor are women.

Against mounting evidence that austerity budgets have failed, the provincial budget dropped with exacting and clinical line-by-line precision. After the initial shock, the response was as swift as it was palpable — a mixture of fear, resignation and mounting anger that a death by a thousand cuts austerity budget inevitably brings.

Social justice advocates, labour unions, pundits, and economists quickly rose up against the budget and pointed out, quite rightly, that it is the poor that will bear the brunt of this budget’s regressive taxation, massive fee hikes, punishing levies and widespread cuts to the services most utilized by the poor.

Ironically, there is a major flaw in the analysis: it’s gender blind.

We simply can no longer be outraged that the budget will hit the poor the hardest, while ignoring the fact that the majority of the poor are women.

Economic policies are not, nor have they ever been, gender neutral. Women are always disproportionately and negatively affected by austerity.

Treating women as a subset of the population is dangerous for women and the economy. We are 52 percent of the population and our experiences cross all social determinants. We are seniors, youth, business owners, heads of families, workers, Indigenous, sex workers, trans, middle class, sick, immigrants, and disabled. We hold the majority of low-paying and precarious employment, take on the bulk of unpaid labour and childcare, and we do so while dealing with a monumental 34 percent wage gap right out of the gate. Add to this our role as mothers and we are the largest users of services — often multiple services simultaneously. A lower socioeconomic status has meant that women are always harmed by cuts in general, but austerity budgets decisively destroy the services we most heavily rely on: healthcare, education, income support and, because of the abysmal rates of violence we experience, domestic violence services and supports.

Last week’s provincial budget has done nothing to buffer women from the hurt that is coming, or to elevate their status.

Since the global austerity push began we have seen the living and working conditions of women decline and rates of violence increase. As oil prices plummeted and jobs were lost, Alberta saw a rise in domestic violence. Here at home the warning bell was wrung by the provincial coordinator with the Newfoundland and Labrador Transition House Association, seemingly without notice. From Greece to the United Kingdom, austerity budgets are wielded as a tool directly against women’s equality and rights. Ten years under the Harper Government has driven this reality home for women.

Under Stephen Harper the federal government closed 12 of 16 Status of Women Canada regional offices. Status of Women Canada is the government agency charged with protecting women’s rights. The Harper Government “also cut funding for over 41 women’s organizations,” according to United Against Austerity. “These include women’s shelters and advocates for women’s health, equality and security. It also cancelled funding for legal challenges to enforce the Charter of Rights and Freedoms. Harper pushed a bill through that undermines the principle of pay equity, and scrapped the national child care program.”

As long as traditional economic analysis continues to recklessly ignore that the status of women has a direct impact on the economy, mechanisms will not be put in place to close the inequalities and mitigate the damage for women. For example, pay equity legislation would dramatically decrease women’s reliance of services and substantively increase their contribution to the economy. In Newfoundland and Labrador, where we have the largest wage gap in the county, pay equity would have gone a long way in enhancing our current fiscal circumstance. A recent United Nations report, Progress of the World’s Women 2015: Transforming Economies, Realizing Rights, revealed that the austerity push hurts women by reinforcing the pay gap, essentially locking women into poverty.

We can change this.

The Women’s Budget Group (WBG), the World Health Organization and others have been calling on governments to use a gender assessment tool when generating budgets and economic policies that mitigate the burden on women. The WBG released a framework of tax and welfare policies called the F Plan “to tackle the disproportionate burden being placed on women by spending cuts.” Pay equity, tax relief, and gender assessment tools can play a significant role in elevating the status of women. Sadly, last week’s provincial budget has done nothing to buffer women from the hurt that is coming, or to elevate their status.

For women in Newfoundland and Labrador it is a tough pill to swallow that the Minister of Finance is also the Minister Responsible for the Status of Women, squashing any hope that the living conditions for women are going to improve anytime soon.

And because of this we really need your help.

We call on all social justice activists who are speaking out against the budget, planning rallies, protests and using your voice to fight for marginalized communities throughout our province to please use a gender lens in all your activism. Our very lives depend on it.

Jenny Wright is a feminist, activist and the Executive Director of the St. John’s Status of Women Council.

Correction: An earlier version of this column stated the wage gap between men and women in Newfoundland and Labrador is 66 percent. In fact, according to the study where the author retrieved the data, women in N.L. earn 66 percent of what men earn, which means the wage gap is 34 percent.

Open letter to MHAs re: Budget 2016
"What motivates you? ... Why did you become a politician in the first place?" 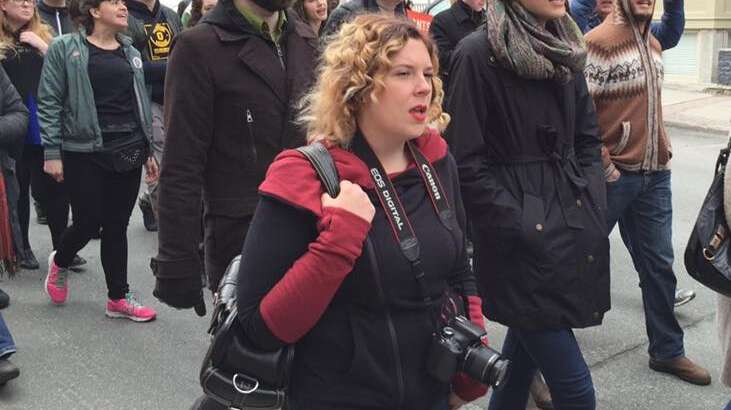 Solidarity and paying my dues
If you can afford to look at this budget in the abstract, you’re well off enough that you can pay a bigger share.