Big bang for the buck

How much do we value knowledge, and must we measure it only in dollars?

“A cynic knows the price of everything, and the value of nothing.” – Oscar Wilde

In Erwin Schrödinger’s famed thought experiment, curiosity did not kill the cat. Instead, it left it tottering on the quantum edge of existence/non-existence. Devised to describe the counter-intuitive state of matter at its most minuscule, the story of Schrödinger’s cat also works on a larger scale, for curiosity is what keeps both science and its postulated pets alive.

As a layman with a surplus of curiosity but no head for math, I am grateful for those with the patience and intellect to dissect reality’s guts, and am fascinated by the results. The workings of our world are wondrous, and I am pleased to be living when so many of those workings are being exposed, pondered and puzzled over.

This is why it saddens and surprises me when another puzzle piece is found and met with a resounding, ‘So what?’ from certain quarters, especially when fueled by a misplaced concern for the bottom line. Whether self-centred (‘How does this put money in my pocket?’) or impotently altruistic (‘Why aren’t we feeding the poor with all the money these scientists are wasting?’), it remains a knee-jerk, narrow and short-sighted reaction.

The focus this past week has been on the Large Hadron Collider, a structure more monumental and complex than any cathedral, and built not to worship but to question. An encounter was had with a piece of matter so minute and yet so significant that it managed to all but lock in the Standard Model of particle physics, or ‘the theory of almost everything’. However, this be not a science article. It’s about this:

That makes me fear for the future of my species, not to mention crave the ability to punch people through a computer monitor. So, just how typical is this nimrod? If numerous blog posts and news comments sections are any indication, he has plenty of company. In a quark-sized nutshell: “Why don’t we use that money to (feed the hungry) (create world peace) (build hospitals/schools/roads) (cure cancer) (save the banks)?”

Well, sure. We could do that. We could reclaim and redistribute all tax-sourced monies presently earmarked for scientific research, and let private, for-profit companies do that work, so we can have more resilient lipsticks and higher resolution televisions. Insist the geologists just find oil and the chemists only provide blue nuggets of virile coal for lagging sexual steam engines, and if it doesn’t pay for itself in immediate, tangible and spreadsheet lovin’ terms, send it begging. After all, knowledge is only worthwhile when it passes a cost-benefit analysis. It must have an easily determinable commercial use. It must have what the bean counters call ‘downstream applications’. Right?

Much of the technology we use today arose from a scientist somewhere asking a question, with no reason to seek an answer but to, well, answer it. To discover. CERN (yes, the same CERN running the LHC) brought us the World Wide Web. And who could have foreseen MRI scanners when Röntgen discovered X-rays? Or antibiotics when Fleming discovered penicillin? The search for the electron was not initiated to create electronics. If it were not for NASA and its brethren, there would be no GPS, cellphone service, weather forecasting, live news from around the world…

Hell, most of those shaking an offended fist at such ‘wastes of money’ are posting their protests on the Internet, created as a global entity by scientists, using a computer which very guts were developed using the principles of quantum mechanics, fueled by electricity, all while bovinely oblivious to the irony. These people would restrain, detour and defund Copernicus, Columbus, Magellan, Einstein, Lindbergh, and Armstrong.

As for the Large Hadron Collider specifically, its cost is shared by CERN’s 20 Member States. It is a global initiative. That money, by the way, didn’t just vanish into a gravity well. It was paid to skilled workers, technologists and manufacturers. As a bonus, no extra charge, we’re completing our understanding of the Universe. If money spent represented a year, the LHC’s entire build cost would represent 180 minutes of it. What the world shells out for its military in that year would take up the other 364 days, 21 hours. Want to build schools? Maybe forgo a stealth bomber here and there, leaving plenty to fulfil its primary role of occupying hangar space, and we can continue expanding the sphere of human knowledge.

That is not a statement about defence spending, which I concede is essential. Call it a picture of priorities. Nor am I stating that all science must be funded from the public purse. Surely, a species as supposedly mature as ours can strike a balance between the capitalist corner into which it has painted itself, and enabling its most agile minds to expand knowledge of our selves, world and universe. Physicist Robert Wilson, founder of FermiLab, America’s plum of particle physics research, was asked by a senator about its value in national defence. He replied, “It has nothing to do directly with defending our country, except to make it worth defending.”

Besides, does anyone really believe that those in charge will funnel the funds to the poor, sick and strife-stricken if that money is not spent on science? Our nations are rife with pork barrel spending and billion dollar summits and bureaucratic bloat. Let’s use our money more wisely, by all means. If we truly wish to re-prioritize, it can be done without short-shrifting science. The money is there. The will, perhaps not so much.

As best I can tell, profit motive is not the only factor in this diminishing of the (perceived) value of science. By definition, the scientific method ought be apolitical. Data is acquired and interpreted. Hypotheses are formulated and tested and, if well-enough reinforced with evidence and result, promoted to the status of theory. Yet, there seems to be a fear of science, of research, often because its outcomes conflict with someone’s dogmatic view. False controversies are created in an attempt to give uninformed opinion the same status as evidence-based conclusions. An ironic and near paranoid skepticism about the scientific method is nursed by ideologues and the superstitious. Our own government ignores the conclusions of those who have studied their respective fields for years upon decades, whose lives are about empiricism and stringent peer review, all to bolster a political agenda. And then dips into the public coffers to create a brand new bureaucratic beast called ‘The Office of Religious Freedom’. You can’t make this shit up.

The bottom line does not always start with ‘$’

So, we have the purely pragmatic, with their spreadsheets and shareholder statements. We have the dogmatists and message masseuses, hobbling anything that might perforate either dogma or message. Yet, even after all that, I have still not made the point I came here to make.

This is that point:

Marvelous tech and profitable products are to be pursued, certainly. However, the crux, core and prime impetus must be our sense of wonder. The simple, eyes-wide human desire (and flair) for discovery. Our need to know; the curiosity without which we would likely still be hanging about in caves or trees. How much is that worth? Who affixes the price tag to the completion of our picture of reality, and how we came to be part of it? How do we appraise our amazement at the beauty of immensity, the humbling brought by infinity and the pleasure of a solved mystery? Do we no longer admire the explorers? Have we become jaded to discovery? Has our sense of wonder withered?

We don’t need the money from the LHC or any other scientific research to end war, poverty, and our sundry other ails. Those very real problems are the result of human greed, cliquishness, territoriality, superstition, geography, tribalism and sometimes just shit luck. Whether or not we ever remedy those problems, we still need – not solely, but certainly – a constant expansion of what we know, and refinement of the techniques to discover what we do not.

Just because we refer to it as our store of knowledge doesn’t mean all its inventory must be sold. 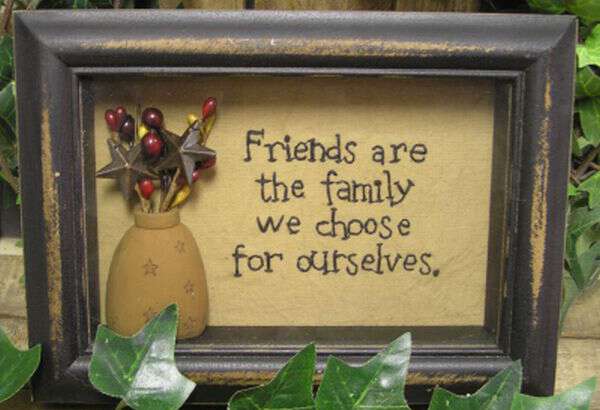 Friends ARE Family
We might all benefit to make family out of friends.