Dispatches from Manhattan on the largest climate march in history

Marches, like life, are made up of memorable moments. This past Sunday, along with a busload of students and activists from Nova Scotia, I joined a sea of humanity at the People’s Climate March. Making history, as many as 400,000 people flooded the streets of Manhattan to pressure governments around the world to take meaningful action to address the climate crisis in the lead up to informal climate discussions convened by United Nations Secretary-General Ban Ki-moon in New York on Tuesday. These talks are a step towards formal international negotiations to create a global climate treaty in Paris next year. The Paris talks are considered by many in the climate movement as a down to the wire last chance to prevent profound global climate disruption.

Climate activist Al Gore opened the proceedings at Tuesday’s summit in New York. The President of the European Union, Manuel Barroso, announced the EU’s commitment to decrease emissions by at least 80 per cent by 2050. UK Prime Minister David Cameron proposed a 40 per cent global cut in emissions. US President Barack Obama declared that “we are the first generation to feel the impacts of climate change and the last generation that can do anything about it.” Canadian Prime Minister Stephen Harper did not attend, but instead sent Environment Minister Leona Aglukkaq, who told the assembly Canada is reducing greenhouse gases in the transportation and electricity sectors. She failed to mention oil or gas.

Here are a few memories from an unforgettable day.

At the start of the March an organizer approached our group and said, “A minute of silence in one minute.” My friend and I looked at each other. Silence? In this crush of people? You’d have better luck on George Street. Surely we misheard. But a moment later a hush fell over the crowd. People halted mid-sentence. Silence. In the midst of Manhattan. I held my breath. And then tidal waves of roars swept in from either side and everyone cheered at the top of their lungs. Like a mass sound check, our political voices were fully operational.

When we arrived at Columbus Circle, where the march officially began, we literally turned our first corner. Metaphorically, it felt like we turned the first corner of the climate movement. A lone voice called out the favoured chant: “What is what democracy looks like?” And with emphatic conviction everyone responded, “THIS is what democracy looks like!” Shivers must be a renewable resource — I get them every time I think of this moment.

The thematic current of the March was simple: we need to break our fossil fuel habit and invest our collective power in building a renewable, efficient and equitable energy system. There was no scarcity of ideas or enthusiasm. Here are three fossil fuel resistance campaigns particularly relevant to Newfoundland and Labrador.

One section of the March was dedicated to Fossil Fuel Resistance, including an anti-tar sands presence. There was a sizable Canadian contingent, and federal Green Party leader Elizabeth May was present. According to my friend, May beamed when marchers chanted, “Steve, Steve go away. We want Elizabeth May.” Protests centred not only on the tar sands but related pipeline projects.

Banners declared ‘East Coast Resistance’ to the proposed TransCanada Energy East pipeline. If approved, this pipeline would transport 1.1 million barrels of crude oil per day from Alberta’s tar sands to New Brunswick — a distance of 4,600 kilometres. An existing natural gas pipeline would be converted to handle oil, and new pipelines, pumping stations and terminals would be constructed with a view to shipping oil to the United States, Europe and India. The carbon intensive Alberta bitumen combined with the risk of oil spills associated with a transcontinental pipeline poses an unacceptable hazard. Such a project will only further entrench our society in a carbon intensive trajectory, delaying an urgently needed transition to renewable energy.

Just as communities in British Columbia and numerous American states are actively resisting pipeline projects, the issue has arrived at our doorstep in what is termed the ‘Fight to Keep the Atlantic Tar Sands Free’. To learn more, join Stopping Energy East and check out the Energy East Resistance Ride.

Divest Dal is in full swing, lobbying for a moratorium on investment in the top 200 fossil fuel companies and a full divestment of the university’s $465 million endowment fund within four years. The Dalhousie Student Union voted unanimously in support of the campaign; the next step is to get the Board of Governors to commit.

A member of the Memorial University Pensioner’s Association raised the question of divestment in 2013; the issue was discussed but no decision made. The Association invites input from its membership. Grenfell Campus has a fledgling divestment campaign that started this past March. To learn more about divestment, visit Fossil Free. And if you want the crash course, consider attending the Fossil Free Canada Convergence in Montreal from November 7-9.

Atlantic Canada is a beacon in the anti-fracking movement. Last year Newfoundland and Labrador’s Minister of Natural Resources, Derrick Dalley, imposed a temporary moratorium on fracking to allow more time for study. This past month, in a decision led by Liberal Energy Minister Andrew Younger, Nova Scotia announced plans to legislate a ban on fracking. And New Brunswick’s newly-elected Liberal premier, Brian Gallant, has committed to a moratorium. Indeed, contention over fracking contributed to the election of New Brunswick’s first—and Canada’s second—provincial Green Party representative.

Fracktivists were out in force at the March. I was struck by the geographic spread of fracking opposition, with numerous state-specific campaigns. At one point, a couple of Nova Scotians shared their success story with a group of New Yorkers currently fighting for a ban. High fives all around.

On the ride home, I lay on the floor of the bus amidst a tangle of restless bodies and sleeping bags. In the silence my brain spun, processing the day, vaguely wondering when during this long trek we would reach the border. And then, out of the darkness, the border emerged. We turned the corner. This is what democracy looks like.

Stephanie Sodero is a PhD candidate in Environmental Sociology at MUN and expended 0.4 tonnes of carbon to attend the People’s Climate March. She’s a big fan of lobster, wind energy and love. 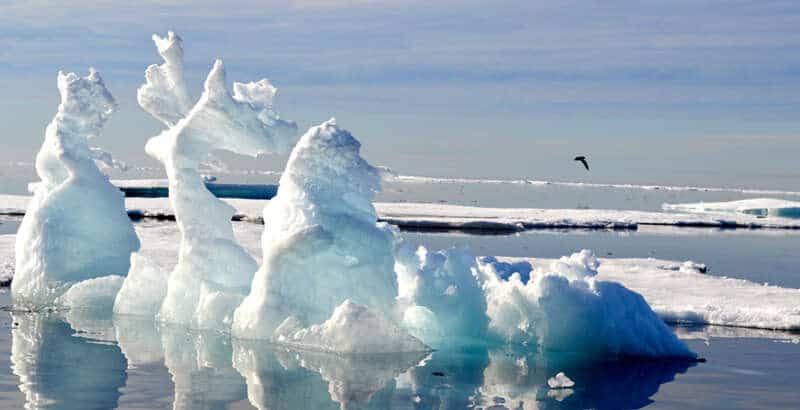 Searching for identity
From the Franklin Expedition to our missing and murdered women, Indigenous voices are being overshadowed

Why should every vote count?
On Sept. 13, a group of fewer than 700 people chose our premier. Last week, New Brunswickers chose theirs. The difference here is important, and…