Feral animals are a societal problem and letting them suffer is the real cruelty. Fortunately, we are thinking, creative animals ourselves, so here’s just one simple way our elected officials can help us get the issue ‘fixed’.

So it looks like the Natuashish stray dog cull has been averted, pending the ability of the Innu government and SPCA’s abilities to get them all out of the community and into foster homes, or moving them out of Labrador completely. The Happy Valley-Goose Bay (Labrador) SPCA and Litters ‘n Critters Animal Rescue in Halifax recently transfered 60 dogs from Labrador, with the gracious help of FedEx. Mind you, this was likely a one-time event for FedEx, and the other cargo/passenger carriers already regularly transport animals out of Labrador with their (donated) excess cargo space on their regular flights.

Depending who you believe, there are currently 50 or so stray dogs in the community that need to be “taken care of” one way or another. However, one CBC report from last year stated there were upward of 300 stray dogs roaming the streets of Natuashish. Either way, I find it odd that the fire department is the group (self-)tasked with taking care of the dogs. Legally, this responsibility belongs to the province via the RCMP (or RNC). While the SPCA took issue with losing it’s ‘teeth’ with the new legislation, I think the onus is actually on the province to remove these animals. Regardless, I commend everyone involved and hope they are able to change the fate of those unfortunate animals.

For those who ran out and signed the (silly) petition to stop the “cruel” treatment of the stray dogs, I seriously hope you put your money where your mouth is. Ditto for the social media ‘commenters’ who have condemned the cull. Kudos to those who are putting their money and time where their mouth is; nothing against you guys. But to the people filling out surveys and signing online petitions demanding these poor animals be taken care of: unless you offer something more concrete, like adopting a dog or donating to cover the cost of transportation, your actions are hypocritical.

Letting them live that way is cruel

I agree the dogs should be saved from their impending, cruel fate, but I disagree that a bullet in the head is cruel – it’s likely less painful than a needle. What’s cruel, however, is the fact that they will otherwise end up freezing to death, (this is not just a Labrador problem) starving to death, being struck by a truck, skidoo or ATV, killed by other dogs or wildlife, or dying from disease.

The latter is common among dense populations of malnourished animals. Fortunately, the Parvo virus is relatively quick. Unfortunately, it’s not painless. Fortunately, it’s preventable with a vaccine. Another wicked little disease we always have to be aware of in Labrador is rabies. It’s worrisome enough that an infected fox could wander into town, but just imagine when there’s one stray dog for every two people. It’s a recipe for disaster, and there’s actually a host of other diseases (a number of which can be transmitted to humans) that could inflict ‘cruelty’ on these poor outcasts.

Unfortunate incidents? Our own fault

Stray and semi-feral dogs are more likely to attack people, it seems. If you wouldn’t feel safe encountering a lone, wandering house dog in St. John’s, imagine encountering packs of them roaming the streets. It’s actually quite surprising it doesn’t happen more frequently. Considering my view that this is an eye-for-an-eye kind of province, I’m surprised there isn’t more support for wiping out stray dogs everywhere after this little boy had his face mangled.

Not long ago, in Labrador we didn’t rely on governments, police, or organizations to take care of stray animals. People knew who caused the dog or cat to be stray and warned them to take it in (or put it down themselves) before another member of the community took it upon themselves to do the same. People did this because of the obvious outcome we’re now seeing in northern communities across Canada. In fact, stray cats and dogs run amok in almost all regions of the world with developing economies.

It’s easy to point fingers and blame the owners for letting their pet go astray (or the forefathers/mothers of the strays). Sure, some of it is pure neglect; this happens everywhere, not just in Aboriginal communities. But factor in that there is little to no access to veterinary services in many remote communities and it’s essentially a perfect storm. Very sad for the animals that suffer.

Regardless, it does come down to another long-standing pet peeve (pun intended) of mine: people who let their cats roam free. These people are responsible for countless litters of kittens who, if they survive, in turn also kill hundreds of animals a year. Cats here may not have year-round access to the outdoors like those in warmer climates do, but regardless, every day your cat is allowed to roam free it may be impacting the ecosystem.

Though feral and stray cats have less of an impact on humans (they’re less likely to spread rabies, or to make off with your baby) they certainly have a massive impact on avian, small mammal and amphibian species. Billions of critters and creatures die at the cute little paws of cats (read: hands of former cat owners) every year in the United States. I couldn’t find a good Canadian study but you get the picture. I did some digging around though and it turns out that, on average, a feral or stray cat will kill over 400 other animals a year. Makes sense, right? One or so a day. Would you let your kids roam around shooting little birds with a pellet gun every day?

Not individual communities. Not individuals. Because once two or more animals are out roaming around the dominoes have been set in motion, so we (as a society) have to do better at taking care of those animals that fall through the cracks. Sure we have some amazing volunteers and some amazing corporate citizens supporting the SPCA and other organizations, but we also need more government support.

The Goose Bay shelter is struggling to raise $220,000 for a new shelter (despite the dozens of empty buildings on the base there, suitable for Muskrat Falls workers but not dogs). The shelter receives a paltry $10, 000 a year but has food and vet costs of over twice that amount. It’s unsustainable. Heck, it’s even unsustainable in Western Newfoundland with three times Labrador’s population to support it.

An ounce of prevention…

If you think I’m out to lunch in thinking we need government to support animal shelters, apparently you’re in the minority. But in fact, it’s actually a cost-effective measure. Investing in the only system that exists to prevent untold environmental damage, reduce suffering of animals, and prevent disease outbreaks is far less costly than band-aid solutions like euthanizing animals or flying them to communities with shelters.

Or, if you’re the ‘fiscal’ type, consider the medical costs for the poor child who was bitten in Natuashish. I’m absolutely certain it’s cheaper to do the right thing for the animals and our communities by breaking the cycle. We can do this by simply providing the neccessary funds for regular veterinary visits to spay/neuter animals, to pay for adequate facilities and/or operating costs of the shelters, and to enforce the laws that we already have.

I’m sure some on the Island oppose their ‘tax dollars’ being used to clean up a mess in Labrador, though using tax dollars to clean litter up in Gander, host galas in St. John’s, fund alcohol, tobacco and gambling support programs, or the (nearly) entire provincial park system that we can’t access on the mainland – all of that’s OK.

Besides, we still spend more on MHA pizza and pop allowances than we do taking care of the animals that we, as a society, allow to suffer. So here’s a proposal: Why not allow MHAs, with their $95,357 (starting) salaries, pay for their own meals (with money that still comes from us) – and we’ll re-allocate those saved tax dollars toward dealing with a real problem.

Next time it could be a child’s neck, not their face. 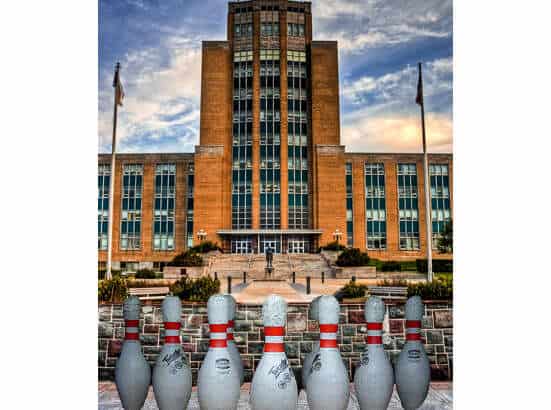 Striking against austerity
Under the threat of continued public sector cuts and further erosion of our societal and cultural values, a general strike may be the only answer.

Burrowing in the Rock
There's plenty of reasons to love Newfoundland and Labrador. For Liam, it's because the province is an ichnological paradise...