Cod and the Fishery: Down, but Not Out

Compared to pre-moratorium times, today there are fewer fish, fishers, processors, vessels, and plants. But the value of our fishery remains high.

I was twelve when then-federal Fisheries Minister John Crosbie announced an end to cod—and what I thought was the fishery too.

My paternal grandfather was the last fisher in our family. His fishing career—from a dory fisherman on the Grand Banks to schooner fishing inshore—had long ended by that time. Pop also died in 1987, five years before the 1992 cod moratorium. For me, a pre-teen in my formative years, it felt as though my family and my province were losing their identities. As the collapse of cod stocks and the moratorium that followed marked an end to fishing for many families, I felt my family’s loss somehow foreshadowed an entire population’s loss, too.

Anyone of a certain age remembers John Crosbie down in Bay Bulls. (Given the average age in the province is now mid-40s, most are of “a certain age.”) It was the day before Crosbie’s formal announcement at a press conference in St. John’s.

“Are you a Newfoundlander or is Ottawa more important?” one man in the crowd asked, captured in news-camera footage from the Bay Bulls waterfront. Crosbie leans in to listen over a clamouring crowd of fishers, plant workers, men, women, and children.

“There’s no need to abuse me,” Crosbie replies, never one to back down from confrontation.

“I’m not abusing you,” the man shouts back, his voice elevated as he defends himself from the accusation.

Crosbie’s line that follows is the one that will go down in history. It doesn’t need repeating. Newfoundlanders and Labradorians know the line. Many Canadians do, too—because at the same time, when we were losing our identity, the rest of Canada was forming their own opinions about us.

No, Crosbie didn’t take the g.d. fish out of the water. But the Newfoundlanders and Labradorians surrounding him suddenly appeared like a school of fish out of water. The supper-hour news coverage by then was dominated by moratorium stories. The coverage repeatedly featured Newfoundlanders and Labradorians torturously gasping for air, their livelihoods yanked out from under them overnight.

More than a quarter of a century later, I’ve spent time digging into what led to this near-death experience—for cod, the fishery, the people, and their communities too. In this column, I’ll focus on the magnitude of the cod collapse by the numbers. While the figures show a downward trend of not only cod fish landings, workers, vessels, and processing plants in the province, the value of landings—total landings across all species—is notably up.

That’s largely because the fishery in this province, as in most parts of the world, has changed from one accustomed to abundance to diversity in supply.

The cod scientists warned the numbers, while hopeful, did not signal a full recovery. After all, the 2014 levels were only half that of pre-collapse peak levels from two decades previous in 1990.

“Cod recovery still far off: DFO”—that was the headline on the front-page of The Telegram on January 30th, 2019. I was back in St. John’s that week and kept a copy of the paper. The news was expected given last year’s Fisheries and Oceans Canada (DFO) report finding a 30% decline in the cod spawning stock—and its prediction of worse years to come for the fish.

Yet, I held onto that paper with its bleak headline like I was holding onto a lotto ticket that was a single number short of the big win. While cod was and is not on its way to reaching its historical levels of abundance, I still hang onto hope that a recovery—in some form—is possible.

These days, as the 1992 moratorium intended to last two years continues marks its twenty-seventh anniversary, DFO permits a “stewardship” cod fishery—a limited seasonal commercial fishery with gear restrictions (on the amount and type of gear) and close monitoring of landings. The annual Total Allowable Catch for cod is about 20,000 tonnes, ten times less than it was before the collapse nearly thirty years ago. A recreational (food) fishery is also practiced with residents and visitors allowed to catch up to five fish per person (or fifteen per vessel) per day during specified periods in summer and fall.

Commercially, there are fewer fishing vessels and processing plants in operation and, likewise, there are fewer fishers and processors (or plant workers) (Figures 2-4). And yet, while the commercial value of cod has fallen alongside cod landings, the years that followed the moratorium led to a redefinition of the fishery—one that became more dependent on shellfish like shrimp and crab than groundfish like cod. Even though total landings (across all species) are down, the value of the fish we catch are up (Figure 5), making commercial fisheries still a major economic driver to the province’s economy.

In researching my forthcoming book, Cod Collapse: The Rise and Fall of Newfoundland’s Saltwater Cowboys, I’ve seen examples of how to make the most of a fishery working with less, how to prioritize value and quality over volume and quantity, and how to yield more fillets than fishsticks. But getting there will require substantive shifts in the way we fish. It will take returning to more traditional fishing methods, or adopting newer, more sustainable practices. It will take renegotiating the terms under which we fish in this province. In the case of cod, it requires a management plan—somehow, one does not yet exist even after our storied history with this formidable species.

Today’s fishery faces greater challenges than ever before, too. Not only are we living with the outcomes (or what retired cod scientist George Rose once called “ghost effects”) of poor past management, but overfishing continues, and global heating presents unforeseen challenges as ocean temperatures rise.

Compared to pre-moratorium times, today there are fewer fish, fishers, processors, vessels and plants. But the value of our fishery remains high. Twenty-seven years after the moratorium, cod and the fishery are down, but not out.

New Hospital for Corner Brook Announced, Again
The hospital’s projected opening in 2023 would come 16 years after it was announced for the first time as part of Danny Williams' 2007 re-election… 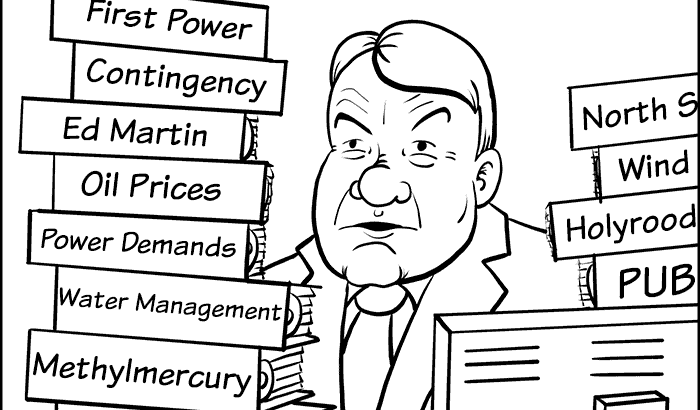 Blame Game (Indy Inks, 4 July 2019)
Sure, the timelines were artificial, the studies misused, the critics attacked, the estimates undisclosed, and the financial close was mishandled... but...