While we may never have encountered a health crisis like this in our lifetimes, our ancestors did.

In an increasingly interconnected world, it was inevitable that the pandemic would eventually make its way to our shores.

Even after witnessing the havoc the virus had wrought in other countries, though, Newfoundlanders and Labradorians didn’t take the threat seriously right away. They continued to throw private parties, attend funerals, and meet with friends for tea despite the government’s warnings to stay home.

Sound like an accurate summary of March 2020? It’s actually a play-by-play of how the 1918 flu pandemic began in Newfoundland and Labrador more than a century ago.

As we face COVID-19, science can tell us about the biology of the virus, but history provides another set of insights. While we may never have encountered a health crisis like this in our lifetimes, our ancestors did.

The morning of September 30, 1918, three sick crewmen were transferred to hospital from a steamer that had docked at St. John’s harbour. They were suffering from a deadly new strain of influenza popularly known as the Spanish Flu.

Like COVID-19, the Spanish Flu was caused by a novel virus, meaning one that had never before been seen in human beings. It’s not clear where the 1918 influenza pandemic began—the first cases were recorded in rural Kansas, but some historians theorize that the virus originated in northern France or China. Whatever its source, the illness rapidly made its way around the world, propelled by the movement of troops to and from the combat theatres of the First World War.

Once the virus made landfall in St. John’s, it ripped across the island. Within two weeks of its arrival in the capital city, several hundred cases had been recorded locally, and deaths were beginning to be reported elsewhere. By the time the epidemic finally petered out, almost 2,000 people were dead—1 in every 134 Newfoundlanders.

The situation in the Big Land was even more dire. The deadly virus was carried from Newfoundland to Labrador with the mail on the coastal boat Sagona. When the Sagona laid anchor in Cartwright on October 20, 1918, with four infected crewmen aboard, the virus quickly took hold in the area, killing 69 of Sandwich Bay’s 300 inhabitants.

Meanwhile, the Harmony, a Moravian mission ship, was steaming towards the Inuit communities of Hebron and Okak to make its last delivery of supplies before the onset of winter. Locals helped unload the ship’s cargo and, within days, hundreds of people were showing flu-like symptoms.

If the outbreak in Sandwich Bay was disastrous, the ones at Hebron and Okak were utterly apocalyptic. Every resident of the two communities contracted the virus, and the majority died.

“What happened with this illness is so many people got sick all at the same time, nobody could take care of anybody else,” says Anne Budgell, author of We All Expected to Die: Spanish Influenza in Labrador, 1918-1919. “People died of dehydration, people died of the cold. If they couldn’t put a junk of wood in the stove, they’d perish.”

In the Hebron area, only 70 people out of a population of 220 survived. Okak, which at the time was one of the largest and most prosperous Inuit settlements in Labrador, was wiped out. 207 of its 263 residents lost their lives, including every adult male in the community. The following summer Okak was abandoned, its orphans adopted by families in Hopedale and Nain.

Amidst the chaos, though, there were stories of exceptional bravery and endurance. At Okliasuk, near Okak, a seven-year-old girl named Martha Joshua survived alone for two or three months, eating hard tack and using a few Christmas candles to melt snow to drink. Joshua later described her ordeal in hair-raising detail:

“My grandfather was out chopping wood, and as soon as he walked in he died. It seemed like he wasn’t sick at all. After I had gone to bed my grandmother came to lie down beside me, and she died.

“I couldn’t shut the door because there was a dead woman in the way. The dogs came into the house and ate the bodies while I watched. I just stayed on the bed, hardly ever moving… There was one dog that looked after me. I think he was my grandfather’s lead dog.”

In the end, the Spanish Flu killed one in ten Labradorians. The Inuit population was by far the most drastically affected, with almost one in three Inuit perishing of the disease.

It took two weeks from the time the first known cases arrived in the port of St. John’s on September 30, 1918, for authorities to institute measures to limit the spread of the virus.

On October 14, Dr. N.S. Fraser, Acting Medical Officer of Health, closed all public gathering places, including schools, theatres, and concert halls. Health officials gave advice that will probably sound familiar: keep your distance from other people, wash your hands, cover your mouth when you cough, and stay home if you’re sick.

The 1918 influenza pandemic grew rapidly, though, and it overwhelmed what healthcare was available. Before 1918, the Newfoundland government had no systematic healthcare strategy, and, as a result, the general health of the population was exceptionally poor. Life expectancy ranged between 30 and 40 years, and the colony’s infant mortality rate was the highest in the Western world.

“When Newfoundlanders became ill, they often had to combat their illness without the benefit of medical care,” explains Terry Bishop Stirling, Assistant Professor of history at Memorial. “Some outport physicians served up to 7,000 people. One stretch of the South Coast, inhabited by 6,000 people, did not even have a nurse before the 1920s.”

Even in St. John’s, where more services were available, there weren’t enough hospital beds for all the new influenza patients.

“The General Hospital and the Fever Hospital were already almost at capacity because the city was also dealing with a diphtheria epidemic and a lot of cases of smallpox, scarlet fever, and even typhoid,” says Heidi Coombs, Ph.D., a research associate at Memorial’s School of Medicine and an expert on the history of the Grenfell Mission.

To respond to the demand for beds, the government converted the mission’s Seamen’s Institute on Water Street into a temporary hospital. Grenfell Hall, as it was known, admitted not only locals but sailors from around the world.

“They took in their first patients October 15th,” says Coombs. “Within about 24 hours, they had already admitted 22 patients, and they had a staff of six trained and volunteer nurses. In total, between October 15th and December 7th, they treated 267 patients.”

Newfoundland’s response to the 1918 flu pandemic wasn’t very different from our response to COVID-19. The government instituted social distancing, recommended hand-washing, and separated virus sufferers from other hospital patients.

Still, we’re going into the coronavirus pandemic with advantages our ancestors lacked. Our overall health has improved tremendously: life expectancies have more than doubled and fewer serious contagious diseases are circulating in our population due to a level of healthcare that could hardly have been imagined a century ago.

With the benefit of hindsight, we can also learn from the mistakes that were made in Newfoundland in 1918 and try to avoid repeating them today.

In 1918, the government’s public health response was fatally slow – large gatherings weren’t banned until two weeks after the first known influenza cases arrived in the colony, allowing the virus to spread unchecked. In 2020, schools were shuttered and non-urgent hospital visits postponed just two days after NL confirmed its first case of COVID-19, with other closures following swiftly thereafter.

The devastating outbreaks of influenza in Labrador show how important it is for everyone, even people who seem healthy, to follow social distancing protocols and for people who’ve recently travelled to isolate themselves from the rest of the community. The Labrador outbreaks also remind us that, although viruses may be biological, they don’t affect everyone equally.

People with incomplete nutrition, inadequate housing, exploitative employment, or pre-existing physical or mental illness are at higher risk of contracting and suffering complications from a disease than the rest of the population. The Inuit of northern Labrador were hard hit in 1918 because they had just transitioned to European-style housing and diet less suitable to the region. Large numbers of Labrador Inuit also suffered from tuberculosis, which damaged their lungs and made them more likely to die of flu.

Many Labrador Inuit, among others, still endure circumstances that make them more susceptible to outbreaks of contagious illness, like housing shortages and food insecurity. Northern Labrador also has the highest rate of tuberculosis in Canada, a disease that’s been virtually eradicated in the south. During the COVID-19 pandemic, we must be especially mindful of the health of Indigenous and other marginalized communities.

Ultimately, perhaps the most timeless tip for any pandemic is this advice from Dr. N.S. Fraser, published in the October 15th, 1918, edition of The Evening Telegram: “Avoid a panic, but take this thing seriously.”

Photos provided by the author. 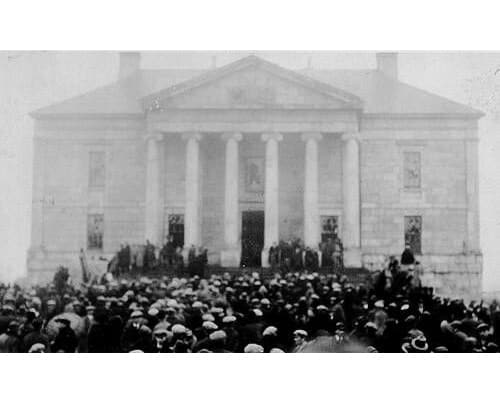 Thinking Outside the Crisis: Introducing a New Series
This column introduces a series of commentaries that create space for positive futures by thinking against the grain of the pandemic.