The Newfoundland Nine and the Labrador None

What it means to send healthcare help to other provinces—while ignoring the worsening state within our own.

A team of nine healthcare professionals from Newfoundland and Labrador have answered the call to help Ontario manage their third wave of COVID-19. To be clear, these individuals should be applauded for their assistance. But sending nine people to help for a few weeks is like putting a band-aid on a severed leg. It does nothing to address the severity of the public health crisis in Ontario—or, for that matter, in Labrador.

In a very public back-and-forth, Premiers Andrew Furey and Doug Ford have been organizing to send this team to help alleviate some pressure on the frontlines. However, this small team is but a drop in the bucket. Government officials in Ontario have recently announced an anticipated shortage of 4145 nurses over the next four months, with their deputy minister of health specifically requesting 620 healthcare workers from other provinces to help manage the immediate shortages during the third wave.

Meanwhile, the circumstances in Ontario are changing on a daily basis. It’s hard to keep track of all of the offers of assistance: Premier Doug Ford initially declined help from the federal government and from the Red Cross. He refused to enact paid sick days or to put forth other measures that will actually help limit the spread of COVID-19 in hotspots like the Peel region (particularly in Brampton). His government isn’t truly addressing high transmission rates faced by employees forced to work on the frontlines. He only recently succumbed to intense public pressure and brought forth half-baked policies around paid sick leave (but only three days worth, and only until September). However, of all the offers accepted or declined, nothing seems to be getting covered with the same zeal as “the Newfoundland Nine.”

It’s not just Doug Ford playing political games in addressing the pandemic; our very own Andrew Furey is joining in too. The Canadian Medical Association—Canada’s national organization representing physicians across the country and advocating on their behalf—has called for “extraordinary measures” to be put in place to address the third wave of the pandemic. One such measure they recommend is the reallotment of vaccines based on need. They stress that a reprioritization of vaccine distribution will help the hardest hit areas of Canada, instead of the current system where vaccines are distributed on a per capita basis. However, Furey—an orthopedic surgeon and associate professor in Clinical Epidemiology—has gone against the organization’s advice and claims “…it is only fair for the per capita model to continue.”

Why can we send our healthcare workers but not our vaccines? And why do we accept, at face value, the need to send medical professionals to another province when we cannot address the gigantic gaps in healthcare within our own?

Problems in Our Own Backyard

The recently released interim report for the Health Accord paints a grim picture of the healthcare system in Newfoundland and Labrador: we have the worst “health system performance” and the highest levels of per capita spending on healthcare. The situation only deteriorates the further from St. John’s you are, with rural Newfoundland and all of Labrador faring worse off on virtually every marker of health.

Labrador is facing extreme shortages of nurses and other health professionals. The CEO of Labrador Grenfell Health Heather Brown recently told CBC Radio that the region faces a vacancy rate for nurses of 21% in hospitals and 30% in clinics and remote health centres. This problem of all-time low nurse staffing levels within Labrador Grenfell Health is no secret. Indeed, the team sent to Ontario explicitly did not allow applicants from the LGH region, but it gave the green light for up to 30 nurses to leave the province from the other three healthcare regions.

Some communities have no nurses whatsoever, forcing the closure of clinics in their entirety, leaving Labradorians stranded with no available alternatives short of relocating. Others are fed up with lack of services and have stepped forward publicly with their stories. Mallory Harrigan has been documenting her father-in-law’s ordeal, worsened by nursing shortages in Southern Labrador.

It’s not solely the staffing shortages that affect the health of Labradorians. Geographic and social isolation, income inequality, food insecurity, housing, and other such things make up what public health officials call the social determinants of health: non-medical factors that impact health and influence health outcomes. When you look at factors like overcrowded housing, the cost of food in Labrador, climate change impacting Indigenous peoples’ ability to hunt for healthy food, a pattern emerges: the state of health and of healthcare in Labrador is poor.

Rates of suicide are much higher in comparison to the island of Newfoundland, with Innu and Inuit communities in particular facing some of the highest rates of suicide in the world. Age-Standardized Mortality Rates (ASMR)—a type of weighted average that show how often something happens per 100,000 people—are the way epidemiologists compare things like rates of suicide across different populations.

According to a 2016 study by Nathaniel Pollock of Memorial University’s Labrador Institute, the ASMR for suicide in Newfoundland is 8.2 and Labrador is 31.6. However, when broken down further by subregion, the true stratification becomes clear. The regions of Labrador West, Upper Lake Melville, and the South Coast-Straits have ASMR of 11.2, 11.3, and 11.9 respectively. These rates jump dramatically in the Innu communities of Natuashish and Sheshatshiu, with an ASMR of 114.0, and the Inuit communities in Nunatsiavut, with an ASMR of 186.8. This means that the rates of suicide in Innu and Inuit communities in Labrador are approximately 14 and 20 times higher, respectively, than the island of Newfoundland.

Another astonishing statistic that highlights the deeply entrenched inequalities between Labrador and Newfoundland is Nunatsiavut’s tuberculosis crisis. Tuberculosis (TB) is a disease that’s typically considered a disease of the past, and one that affects primarily low- and middle-income countries, and yet Nunatsiavut faces the highest rate of TB in all of Canada: 248 cases per 100,000 people, compared to Canada’s national average of 5 cases per 100,000 people. This has a real human cost—one that statistics alone cannot convey. In 2018, Nain lost fourteen year old Gussie Bennett after he died of TB.

The reality is that Labradorians are bearing the brunt of a failing healthcare system. Labradorians are dying. The inequities of a broken system are costing us, and we’re paying with our lives. Yet our government does nothing about these disparities. Beyond all reason, our Health Minister Dr. John Haggie even recently claimed that the system discriminates in favour of Labradorians.

But when Ontario calls, suddenly we have the resources to help. When it’s one of the richest and most populous provinces in the country, we can suddenly scrounge up “volunteers.” When our own residents are suffering—in predominantly Indigenous communities—there is nothing on offer but condescending comments.

A Sober Assessment of “Positive PR”

What is made increasingly clear is that this stunt, made against CMA recommendations without addressing true root causes of the worsening pandemic, and ignoring the health crises in our own backyard, is just that: a stunt. The big production that’s been made around sending nine individuals is a blatant spectacle. It is political theatre.

That can be the only explanation for the spectacle on display on Tuesday, April 27th. Media provided up-to-the-minute coverage with photo shoots of Premier Furey hugging his wife, Dr. Allison Furey, as she left on the military cargo plane bound for Ontario. The team, in matching branded Newfoundland and Labrador t-shirts, posed for the photo ops and gave interviews with the many members of the media present for the event. With hyperbolic language around duty and sacrifice, members of the team have been doing a whirlwind media tour, including outlets like Toronto’s Breakfast Television.

This is not to criticize the individuals on this team. What they are doing is remarkable and they should be commended. Their help is appreciated, their work is important, and their efforts should be praised. However, we should question the fact that governments seem to be relying on individual acts to address systemic problems and not just fawn over it uncritically. Acclaim for the individuals and healthy criticism of the overall political system are not mutually exclusive—and this cannot be stressed enough.

Indeed, that media appear to be lavishing uncritical praise themselves—even going so far as to analyse the stunt as “positive PR” without thinking through their own responsibility in reporting on this event—shows exactly how stage-managed this spectacle truly is.

So let’s continue to applaud our frontline workers. But let’s not forget to look at the bigger picture. We must remember what is driving the worsening third wave, particularly in places like Ontario: government inaction and policy failures. Let’s appreciate the help offered by our healthcare workers, while advocating for better services here at home.

As long as we continue to heap praise on our politicians for perfunctory solutions like sending nine individuals into a crisis zone without addressing the circumstances that require their help, the deep fissures of inequality will only grow—while the COVID-19 pandemic will rage on. Both will continue to cost lives. 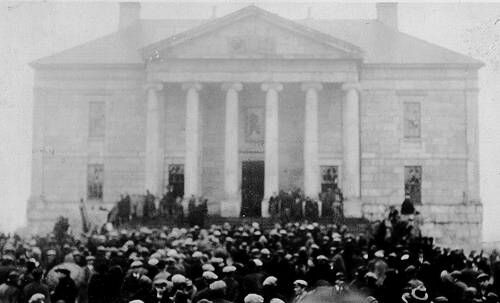