Last week, The Indy explored the reasons why young people are leaving Newfoundland and Labrador. Today, we’re exploring ideas that might bring them back.

Last week, The Independent explored the reasons why young people are leaving Newfoundland and Labrador. Today, we’re exploring some ideas that might bring them back.

Expat Newfoundlanders and Labradorians have a number of ideas that would entice them to return to the province. These ideas hold potential for not only expatriates but youth, immigrants and other newcomers—not to mention those already living in the province. These ideas are profiled in arecently released report commissioned by the Government of Newfoundland and Labrador’s Department of Advanced Education, Skills and Labour.

According to the report, many expats who informed the consultation “spoke to the need for the province to move away from a reliance on boom and bust industries (e.g., oil and gas).” They felt the province’s current approach contributes to “a volatile economy and one which creates uncertainty for those seeking job security.” One of the areas cited as a growth opportunity is investing in green and small-scale renewable energy.

“It certainly meshes with what we’ve recently heard in our community energy planning research on the coast of Labrador,” Nicholas (Nick) Mercer, a PhD candidate in the Department of Geography and Management at the University of Waterloo with expertise in renewable energy policy, told The Independent.

“Aging populations and migration are a huge issue facing mostly small municipalities from Labrador,” he continued. “And we heard from most of our respondents that if there was good, permanent, full-time work available in sustainable energy sectors that weren’t based on boom and bust cycles, that people would be willing to come back to those communities.”

Mercer says it’s not only oil and gas that fit the “boom or bust” industry profile: it’s fisheries too. But insofar as energy opportunities, he says Newfoundland and Labrador has among the greatest potential for wind energy development. A 2009 research paper by Kyla Fisher and colleagues undertaken at The Harris Centre, a public policy and regional development research hub at Memorial University of Newfoundland, reported the province was theoretically capable of producing 117 times the amount of its 2006 electricity demand through wind energy. A 2017 research paper by Christopher Barrington-Leigh and colleagues for the peer-reviewed journal, Renewable and Sustainable Energy Reviews, further reported the province could create nearly 20% of Canada’s 2010 energy demand by making use of the one-quarter of NL’s wind development capability.

“Despite having abundant renewable energy resources… NL remains dependent on fossil fuels for regional economic activity, government revenue, and electricity generation,” Mercer and colleagues wrote in a 2017 research paper published in the peer-reviewed journal, Energy Policy. The report’s findings, which are based on Mercer’s interviews with academics, community groups, government officials, and private sector organizations, found a number of barriers such as a lack of supporting provincial policy and regulation, existing fossil fuel subsidies and a preference for the “energy status quo.”

“The province has a mega-project mentality,” Mercer explained. “If it’s not large-scale hydroelectricity or offshore oil and gas development, simply isn’t considered [and] the province simply isn’t willing to consider it as an economic development strategy.

“Right now, all resources, all staff, every bureaucrat in the province is concentrated on either completing Muskrat Falls or doubling offshore oil production in the province by 2030,” he concluded. “Between those two realms of economic activity, there just hasn’t been space for anything else to develop.”

Youth retention: Integrating career-learning into education at all levels

A complementary strategy to repatriating Newfoundlanders and Labradorians living elsewhere is focusing on ways to support youth and young adults to stay in the province.

One promising way to bring young people back or entice them to stay is more deliberate career advice and planning in schools and universities to prepare and attract youth for careers in the province.

“I think the best practice that just about everybody has agreed on is around work-integrated learning or experiential learning at the post-secondary level,” Dr. Matthew McKean, leader of the Conference Board of Canada’s education and future skills file, told The Independent. “There’s a case to be made for bringing career advice and employability skills and those kinds of conversations into the K to 12, but I think it takes on a new sense of urgency in post-secondary, in college, polytechnics, and the university level.”

The federal government’s Budget 2019 invested almost $800-million into experiential learning or work-integrated learning, McKean explained. The premise is to bring co-op or career-integrated learning into every post-secondary field, beyond disciplines where co-ops are already common-place. They are common in computer science, engineering, and trades; the idea is to expand them to students who don’t traditionally have the same access to work-integrated learning, such as those in the humanities and social sciences.

“In the context of Newfoundland and Labrador, or in any region, [this approach] will help keep new graduates in those regions,” he explained. “It increases the likelihood that you’ll get hired by the company where you do your placement and it expands the networks that people have. Just naturally, you get into a workplace, you get on the phone, [and] meet new people. That to me is the holy grail for this conversation.”

For the K-12 space the conversation ought to focus more on “learner pathways,” said McKean. That’s sort of like asking people from a young age, “how do you want to live?” and then reverse-engineering the supports they need through K-12 into post-secondary education and beyond. The aim is to turn their interests into realities.

Creating pathways for youth to stay in this province will also mean challenging some long-held stereotypes. One of the markers of success for a young person from rural Newfoundland and Labrador is moving away—that’s one of Nicole Power’s research findings from talking to young people in rural parts of the province. Power is a professor and researcher in Memorial University’s Department of Sociology and has studied the impact of long-term fishery closures on young people’s experiences and perceptions of fisheries employment in Newfoundland coastal communities.

“If you stay in a rural place, you may be called a failure,” Power told The Independent. “If you think about how people talk, they say, ‘oh yeah, so-and-so, they’re doing really well, they’re living in town, they’ve got a big house.’ Those kinds of things. So, it may be that young people feel those ‘signs of success’ are not available to them in rural places, so I think there’s real pressure to leave even if they want to stay.”

Attracting Newfoundlanders and Labradorians to stay or immigrants and newcomers to live and work in the province is “not going to happen with government driving the bus,” Bernard Davis, Minister for Advanced Education, Skills and Learning, told The Independent. “It’s a partnership between industry, community organizations, and between the people right across our country, or wherever they live, because it is a two-way street.”

While the provincial government cannot have all of the solutions, it serves an important role in helping make it easier for those who do: whether they are long-time residents, repatriates, or immigrants. The report points to existing programs, such as the Self-Employment Assistance Program, which provides (Employment Insurance-eligible) individuals with an option to start a new business. The report also recommends the development of a provincially-sponsored Entrepreneurs Support Network, which could support “budding entrepreneurs”—whether those living in the province or those aspiring to move there—to connect and learn from what has (and hasn’t) worked for established business owners in the province.

What will it take to put the promises into practice?

Expats’ views on reasons to return home to NL offer hope to a province facing an aging (and declining) population and higher unemployment rates than elsewhere in Canada.

Their ideas offer hope not only for those who have left the province, but for current residents, youth, immigrants, and other newcomers. The majority of survey respondents indicated a desire to return—less than one-fifth reported that nothing would encourage them to come back. But this finding may be a product of self-selection bias: those who took the survey may be more passionate about returning than a random sample of Newfoundlanders and Labradorians living away.

This in itself is still telling. Even among those who would most like to return—and have practical ideas about turning the promise into the possible—are not in a position to do so. Perhaps if we take seriously the suggestions of those who have left the province for elsewhere, we may be able address some of the issues that drive people away.

On Escaping Your Own Prison: An Introduction of Sorts
You’re probably wondering why a person would create such a tiny space for themselves, this prison cell. Well, why does anyone build walls? For protection. 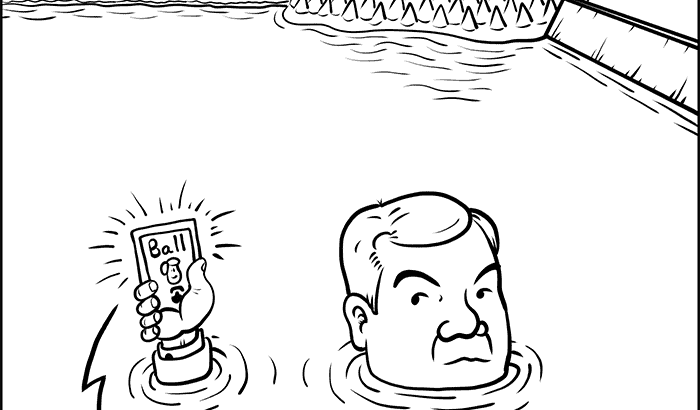 Indy Inks (24 July 2019)
Anyone else get a sinking feeling when they think about flooding the Muskrat Falls reservoir next month?