Why I am still wearing a white poppy for Remembrance Day

The white poppy symbolizes grief for all victims of war, civilian as well as military, regardless of nationality. It also represents opposition to war and determination to work against the causes of war. Today it is relevant as ever in a Canada newly committed to humanitarianism and peacekeeping.

When I wrote about my reasons for wearing a white poppy this time last year, we had a federal government that never lost a chance to promote its peculiarly insular and militaristic nationalism.

Warmonger proclamations were emanating loudly from the Prime Minister’s Office on back of the then-recent murders of Corporal Nathan Cirillo and Warrant Officer Patrice Vincent — murders connected only by their killers’ shared history of mental illness and self-radicalization as adult converts to Islam.

The newly elected Liberals campaigned vigorously against the creation of suspect categories of Canadians. They’ve promised to repeal “problematic” aspects of the “anti-terrorism” Bill C-51. Such critics as Amnesty International and Open Media wonder if the reforms will be sufficiently thorough, and there’s the awkward problem of the Liberals’ support for the legislation at the outset.  But let’s give them a chance.

Likewise with their promise to reinvigorate Canada’s constructive engagement with the world on issues ranging from climate change to peacekeeping, and to make up for lost time on asylum seekers. (Unfortunately, prospects for a much-needed new approach to Israel and Palestine appear somewhat dimmer.)

And then there’s our new Minister of Defence, Harjit Sajjan. Clearly an extremely able intelligence and police officer, media outlets love to call him “badass” and publish file photos in combat gear. But he obviously has no problem “committing sociology,” Stephen Harper’s anti-intellectual put-down of any attempt to go beyond Pierre Poilievre’s idiotic statement that “the root cause of terrorism is terrorists.”

For Sajjan, who was deployed three times to Kandahar, the military effort would be futile without understanding why Afghans who did not share the Taliban’s political ideology welcomed the bulwark it provided against corruption, land grabs and extortion. Likewise, in a 2007 letter addressing opium crop eradication, Sajjan argues that, pursued in isolation, it pushed farmers to the Taliban by destroying their means to make a living.

In short, the soldier Sajan might not hold to the entirety of the Peace Pledge, but he seems to share in its final point:

War is a crime against humanity. I renounce war, and am therefore determined not to support any kind of war. I am also determined to work for the removal of all causes of war.

In a CBC interview about the making of his new film Hyena Road, Paul Gross recounts a Chinook helicopter flight with Canadian troops in 2011:

Up ahead I could see a guy walking along an irrigation ditch … carrying what looked to me as a complete amateur, like an RPG: a rocket propelled grenade. … And then I hear one of the pilots say, “We might have an RPG. Bank left.” And then the helicopters banked, and then the attack choppers, the Griffons, the escort helicopters, went screaming up ahead: “We’re on it. We’re on it.” And the door gunners all adjusted their weaponry, and the guy appeared to turn and stare straight at me with his RPG, and I thought: “Crazy. I’m going to die, right here in Afghanistan.” And then I hear over the radio the attack helicopter say, “No. It’s just a shovel.” And then everybody calmed down. We all continued on our way.

My first thought was what it would be like as a farmer to have to worry about foreign troops in attack helicopters mistaking your shovel for a rocket launcher as you went about your field-tending or shepherding business. Gross’s preoccupation was different. For him, the point is the impressive restraint of Canadian troops in Afghanistan. Had he had the gun, he says, he would have strafed everyone in sight.

Indeed, after several weeks with Canadian soldiers in Afghanistan, he said, he “felt very moved by what our brothers and sisters, our neighbours, our fellow citizens, were asked to do over there and the extraordinary dignity and integrity with which they represented us and I don’t feel their story has been particularly well told.”

Hence, Hyena Road—which I haven’t had a chance to see but understand from media commentary—turns on the moral complexity of war when viewed at close range but does not take a position on the big picture merits of Canada’s involvement.

Another Canadian, Graeme Smith, spent years in Afghanistan trying to get to grips with Canada’s war there. While clearly admiring many soldiers he met along the way, Smith writes in The Dogs are Eating Them Now that by 2007 he “began to seriously doubt the nobility of the war.” That was when he started collecting substantive evidence that Canada had handed detainees over to Afghan authorities when its military and political leaders knew, or ought to have known, they would be tortured.

Breaking the detainee story was consequential. Yet Smith writes repeatedly of his sense of failure at not delivering it sooner — partly because his affinity with military personnel, who he continues to see as good people, led him to drop certain threads.

Among these is the episode that gave his book its title. In 2006, a Canadian Forces unit came across the bodies of some Taliban fighters — an unusual event for the Taliban who, as Muslims, generally buried their dead quickly. The Canadians dragged the corpses into the open, hoping to bait the Taliban. They succeeded only in attracting wild dogs.

Arguably a Geneva Conventions violation, it raises all the usual questions about whether principled ends justify morally questionable means.

Albie Sachs, once an African National Congress (ANC) activist and later a judge on the South African Constitutional Court, grappled with these questions in the most direct ways. Sachs, like many other ANC members, endured solitary confinement and torture at the hands of the apartheid government. When Oliver Tambo asked him to draft policy on the treatment of ANC captives—agents who had been sent to infiltrate the ANC—Sachs describes it as the most important legal document he worked on in 50 years as a lawyer, including his contributions to the post-apartheid constitution.

As he recounts, the activists had every reason to embrace “intensive interrogation” methods in the short term. The apartheid “regime was doing everything in its power to wipe the ANC off the face of the world.” Sachs himself would later lose an arm and sight in one eye to a car bomb set by the South African security forces.

And yet, delegate after delegate agreed that the movement could never establish a society grounded in human rights and democracy through violating those very principles:

One member … declared in a quiet voice that we were fighting for life, how could we be against life? … There were no headlines to be gained … We were simply reaffirming the soul of our struggle, the kind of people we were, what it was that bound us together. Unanimously we decided that no euphemism for torture or other cruel form of treatment would be accepted.

After the car bomb, Sachs’s comrades offered vengeance. “‘Avenge me?’ I thought. ‘We’re going to cut off their arms? We’re going to blind in one eye? Is that what we’re fighting for?’ And then, the thought came to me that if we get democracy in South Africa, if we get freedom for everybody that will be my soft vengeance. Roses and lilies will grow out of my arm.”

Perhaps one of the best measures of that soft vengeance is Sachs’s friendly relationship — not friendship — with the man who orchestrated the car bomb. This is possible, he explains, because “we are starting to live in the same country.”

Why I am still wearing a white poppy

Similarly, for Albie Sachs, the lesson of Oliver Tambo’s refusal to sacrifice human rights to wartime expediency is that we must “be on guard not only against our enemies but against ourselves.”

I wore a white poppy last year at least partly as a mark of protest at the actions and rhetoric of the government that claimed to represent me.

We have a new government now. It has its work cut out for it. This work includes facing up to the legacy of our role in Afghanistan, for Afghan civilians and also for our soldiers. For they are paying the most direct price of a foreign policy driven by militarism and the moral ambiguity of counter-insurgency warfare.

This year, as I wear a white poppy again, I do so at least partly as a mark of encouragement. 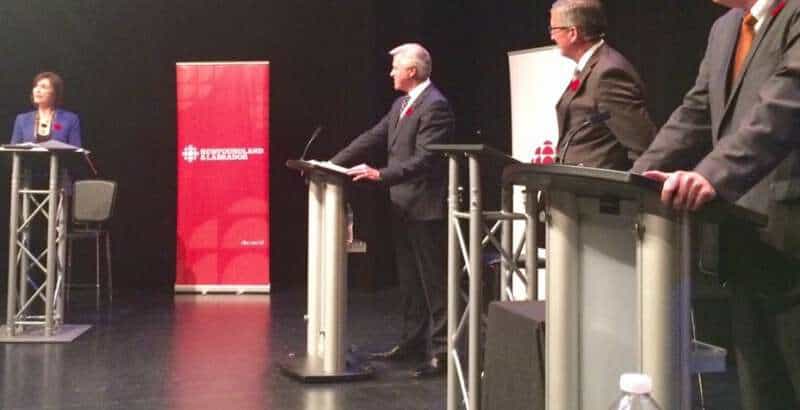 Status of Women debate a historic first for N.L.
Last Monday's debate revealed the province's three leaders know a lot about the problems, but are less clear on the solutions.

Lest We Forget Aboriginal Peoples’ sacrifices for Canada
Oftentimes Remembrance Day ceremonies pass without mention of the Aboriginal Peoples who served a country that was undeniably disrespectful to them in return.