Our understanding of similarity and difference can change over time

When you live somewhere that is very far from home, and very few people can visit, you tend to find yourself answering a lot of questions upon your return. Most of the conversations you have at your Welcome Home party, or running into someone in the mall tend to fall along the same lines:

Where have you been?
What was THAT like?
So, what did you DO all the time?
You’re so brave… how did you manage?

I suppose it’s to be expected, given the lack of variety on TV or in the news – which, once no longer required to sit through a World Geography class, is where we get a lot of information about life in other countries. I realize that it’s not very exciting or newsworthy to show clips of the mundane, everyday details of life. Get up, shower, eat breakfast, go to work, (pretend to) do work, eat lunch with co-workers you like and don’t like, go home, eat supper, watch tv, fall asleep. It’s not exactly riveting stuff. And I’m not naive. I understand that more viewers equals better success and profits, and a television set makes no promises to accurately represent anything or anyone. And I further understand that packing your bags and heading to lands afar is something that many people find frightening and foreign in every applicable way. What I’ve struggled with is just how foreign so many people find the idea as I’m giving them the who’s and the what’s. At times, the physical distance I felt while living on the other side of the world is too easily matched by the experiential distance I found upon my return.

Back up a bit

One of my first thoughts when I stepped off of my first trans-continental flight was, “What have I done?” I couldn’t find a familiar thing if you paid me. Everything was written in a language I couldn’t yet read. I had a handful of cash in my pocket that didn’t really mean anything because the numbers written along the side of the notes were way too high. Does 10, 000 won buy me a pack of gum or pay the rent for a month? Nothing made sense – even the air smelled insane. Granted I was extraordinarily jet-legged and desperately needed food from a non-airplane kitchen, so a certain level of confusion was to be expected. But in those first few hours, I felt completely and utterly like an alien. I didn’t see how any of this would ever be normal, and I felt a huge gap between myself and everyone else. I was an Us and the others were a Them.

As time goes by

That feeling of everything being completely foreign stopped after a couple of weeks when life began to feel more predictable. I saw the same people along my way to work every morning. The man who ran the bakery was waiting for me every Monday with a sample of something he wanted me to try. Suppers out with some friends on Thursdays, take the train into the city on Friday, and back to my small town again on Sunday. It all became very uneventful, and I suppose that was around the time that I stopped thinking of myself as being so very different from “them”. Obviously, it was a gradual process and I didn’t just sit up in bed one morning singing, “We are the world….” It was just a process of realizing that my Us vs. Them structure was falling apart because so few things were fitting the mould anymore. Not every Asian I met was diligent and reserved. Some of my co-workers were downright lazy. I know, shocking right? The food wasn’t that weird after a while. It was a lot of the same dishes, over and over. I learned how to read Korean in a few hours (sadly, this is not impressive – most people do) and nailed down my first few useful phrases for shopping and directing taxis. This was also around the same time I noticed some of my expat friends saying things like, “Well, in Canada/America/England we do ___” when they were feeling frustrated by something that didn’t seem right. I chalked it up to homesickness, culture shock and just not knowing what else to say sometimes. It is hard to vent your frustration if you are suffering a communication breakdown because of a language or cultural barrier. I think most expats are aware of that – even when that phrase comes flying out in moments of weakness.

So, let’s fast-forward over the next six years I spent living outside of Canada. Whenever I could afford the time and money, I would travel somewhere new. That meant sleeping on a lot of couches, eating a lot of street food, and trying to rotate three shirts into a workable wardrobe for an entire holiday. In all of the impressive architecture, new tastes, and confusing sounds my favourite thing was the same everywhere. I absolutely loved people-watching. Maybe we are all too acutely aware of the massive differences between countries, and perhaps that’s why I liked finding similarities in the deceptively mundane. People were rushing to work, reading the paper on the subway, selling and buying food at the market, ushering their kids here and there, standing in a line-up at the movies… I think I took a lot of comfort in that. I felt connected just by being human, so it didn’t matter that I didn’t look like anyone else. There didn’t appear to be anything brave or bizarre about it.

So, now that I am home and surrounded by what is supposed to be familiar, fielding those questions reminds me of distance and separation. And as I stumble and stutter through answers, I rarely leave the conversation feeling satisfied with what I’ve said. I wonder if the people on the other end of the conversation feel the same. They’re fumbling through questions about things they don’t find familiar, and I’m bumbling through answers that sound rambling even to me. It seems that ideas are not lost in translation alone.

Have you ever found yourself on either side of this divide? What’s your experience been? 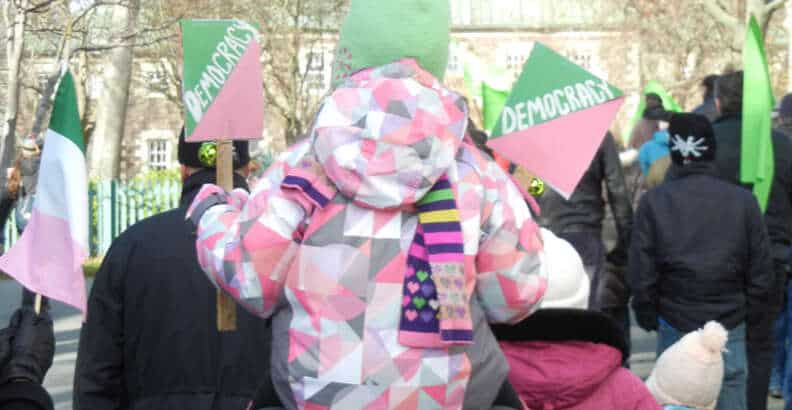 Muskrat Falls ‘process’ catalyst for democracy in the streets
Against intensifying discontent over what many are calling "undemocratic" governance, the Dunderdale-led PCs are pressing to sanction the Muskrat Falls megaproject. As a result, more…

When you fail to plan…
Canada doesn't have a national food plan. Should we?