Chapter 1: The story I’ve got in me

It’s time I said why I never left Hopeless Bay

When brother left for the forces grandfather thought aloud for days. “We all got to end up somewhere,” his eyes vacant like ponds in a gravel pit. “Be it Brigus or Baghdad. We’re all somewhere for some damn reason.”

I always figured you stay for a reason and leave for a better one. Simple as that. None of us are rooted in the dirt of where we come from, like trees. Not anymore. We’re no more like trees than we are telephone poles.

“We ain’t the ones makes the world go round,” the old man said. “We’re the ones goes around and around.”

I’m sitting here in Hopeless Bay, for a reason unlike anybody else’s. Here in Hopeless Bay I don’t fish, I don’t work at the fish plant, I don’t teach, I ain’t the minister, I don’t collect the garbage and I don’t stand behind the counter at the convenience store.

I never had what you’d call a reason to stay. I was as good as gone when I graduated with my grade 10.

The one and only explanation for why I’m still here is a secret I’ve never told a soul. But it’s time I did.

The story I’ve got in me, about why I didn’t become a stranger to this place like the rest my age; why I’m still a resident of this insignificant town 27 years strong, is an odd one.

I was born a bayman in this ancient house 27 years ago. Mother was wild as a gannet and took off to Toronto before I could speak a word. Left brother and I to be raised by our grandparents. My father already had a family of his own, somewhere. Brother’s father might even be a mystery to our mother.

But we grew up tall, bright enough – normal. We were our grandparents’ boys and that was best kind for everyone involved. By the time we were teenagers they were well into their 70s, going around like 50-somethings.

We never had money in this house. We had things and everything we needed. But there was no safe in the closet holding our college funds or nothing like that. Half the reason I never finished school. I was as smart as that place was about to make me, and university didn’t seem doable. So I saw myself moving into town and getting a job screwing screws.

Everybody I knew went off to St. John’s from this “hole.”

I got stuck with, “what are you still doin’ back here?”

It was like some kind of crime I committed, I’ve been questioned so many times. Like every day I’ve spent here in the past nine years has been nothing more than a sentence I’ve been serving.

But I stayed, for a reason I never seen coming. A reason as random as the rain. A better reason than I had to move my life into a basement apartment in Cowan Heights. 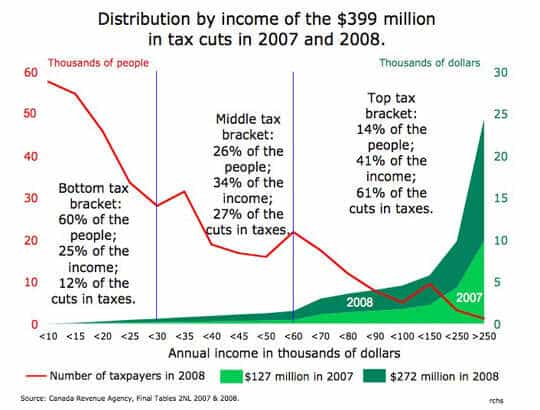 Tax Cuts
If the wealthy amongst us, those in the top income bracket, had continued to pay their taxes at the rates prevailing in 2006 there would…

Welcome to the Dark Side
Finding inspiration in dark corners, airport tantrums and shrinking ice caps