By 2010, the federal government will have taken in 84 per cent of benefits from the oil industry on the Grand Banks off Newfoundland. This province will have collected 16 per cent.

An analysis conducted by The Independent as part of the newspaper’s cost benefit analysis of Confederation, estimates Ottawa will earn revenues of $6.1 billion, compared to $1.1 billion by Newfoundland and Labrador over that time frame. In calculating the figures, The Independent used the existing royalty formulas, applying revenues earned against investment contributed, to date, by both levels of government.

Over 476 million barrels of oil have been extracted from the Grand Banks since Hibernia drew first oil in 1997. From that oil, the federal government has collected an estimated $1.6 billion to date from corporate income tax and its 8.5 per cent share in Hibernia. The province has taken in $625 million in royalties and taxes.
Factor in equalization clawbacks, and the gap widens: revenue for the feds stands at over $2 billion; for the province, barely $200 million.

According to the current formula, between 70 and 80 per cent of offshore oil royalties are returned to the feds in clawbacks.

This is the gap Premier Danny Williams and Finance Minister Loyola Sullivan are trying to close in their current efforts to amend the Atlantic Accord.

“The deal the prime minister agreed to was 100 per cent of the revenues and that’s the deal,” Williams tells The Independent, referring to comments first made by Paul Martin in St. John’s last June during the federal election campaign. “Our province can’t, and won’t, accept anything less.”

Williams says he’s confident Martin will live up to his commitment: the deal will be done by Oct. 26, and the changes in revenue will be retroactive to April 1. “Next year, from the accord we should get $150 million and that’s at the low end.” It’s at the low end, because the offshore industry is only really getting warmed up.

Former federal minister John Crosbie, who was also one of the signatories of the Atlantic Accord in 1985, thinks Williams is on the right track. “This will make a big difference in revenue,” he says. “It all depends on the price of oil … if the oil prices continue to rise, it undoubtedly means billions over the next eight to 10 years I would think.”

There are also trillions of cubic metres of natural gas on the Grand Banks and the Labrador shelf, an industry that may come on stream within the next decade.

Hebron is next on deck, and explorations are planned in two other potential oil fields off the province’s coast: the Laurentian and Orphan basins. In short, over the next decade, the profit margins will skyrocket.

The oil and gas reserves offshore Newfoundland and Labrador are technically owned by Canada — unlike onshore resources, like Alberta’s petroleum, which fall under provincial jurisdiction.

Even if Williams’ amendment to the Atlantic Accord goes through, the federal government stands to be a heavy winner from the riches offshore Newfoundland and Labrador. Ottawa collects significant corporate income taxes from the industry, which will increase dramatically as production increases and the price of oil soars past $50 a barrel.

The federal government will also see healthy returns from early investments it made to get the industry off the ground. The provincial Department of Finance estimates the federal government has taken in $1.6 billion in profits since 1997. “That’s very much an over-simplification,” a department spokesperson tells The Independent. “It’s our best estimate, given we don’t have access to federal income tax numbers …”

The federal government (specifically, the Canada Hibernia Holding Corporation) owns 8.5 per cent of Hibernia. That initial investment — made in 1992, when Gulf Oil walked away from the project — of $431 million has been returned, and has yielded an estimated net profit of $150 million thus far. “I think next year (the profit) is $200 million,” says Williams.

The Government of Canada made other investments in the East Coast petroleum industry, particularly in the 1980s, helping to get it off the ground. The importance of subsidies and other incentives is not lost on today’s industry professionals. The largest was a $1 billion grant, from Ottawa to Mobile Oil, in an effort to encourage the development of Hibernia.

At the time, the federal funds were characterized more as a social investment than a lucrative business decision. Critics said Hibernia was little more than a $1 billion make-work project.

“Many people ask why did we join Canada? Well, we were a poor, poor country,” says Moya Cahill, president of St. John’s-based Pan Maritime Energy Services.

“You cannot develop an industry without cash flow. Canada has been good to us coming from a cash flow perspective. Hibernia never would have happened without the federal government,” Cahill says.

The Petroleum Incentive Program offered a “significant incentive” to companies to undertake oil and gas exploration, says Paul Barnes, manager of the Atlantic offices of the Canadian Association of Petroleum Producers.

“And it did. They availed of the program and there was a lot of drilling here in the late ’70s and early ’80s.”
There was also a $300-million offshore development fund, 75 per cent funded by the federal government, in the 1980s. Much of that money was used in education and training.

Although the oil industry has not met some of the wild expectations of the 1980s — predictions were made that Newfoundland would be a have province in just a few years — it has contributed much to the provincial economy outside of royalties and corporate taxes.

According to one estimate, provided by the provincial government, over $17 billion has been spent on offshore exploration, development and operations since the 1960s. In terms of the gross domestic product (GDP), the sum of all goods and services produced in the province, the offshore industry has generated $7.7 billion since production began in 1997. Currently, it accounts for 21 per cent of the GDP.

Thousands of direct and indirect jobs have been created in the province (3,800 people were directly employed by the three current projects in 2003 alone) — but few are in refining or secondary processing.
The province’s one refinery, at Come by Chance, employs over 550 people — but virtually none of the oil from the province’s offshore is refined there.

Nearly 100 per cent of the oil from Hibernia and Terra Nova is refined in mainland Canada and the United States. About half of what has been extracted — some 213 million barrels so far — has been refined in the Maritimes, Quebec and Ontario. The remainder has gone to the States and the Gulf of Mexico.

Williams says, in the future, the province intends to take better advantage of secondary opportunities.
“The complaint is … we’ve got bulk oil, we’re looking at bulk nickel leaving the province and bulk iron ore, we have to make sure that the processing occurs in Newfoundland and Labrador, he says.

“As part of any discussions going into an industry, particularly the gas industry, we have to make sure there’s more long term permanent job creation. That’s the purpose of the whole Voisey’s Bay exercise, to build a smelter … to have jobs and industry after raw material is gone.”

Federal government to step in to end postal strike 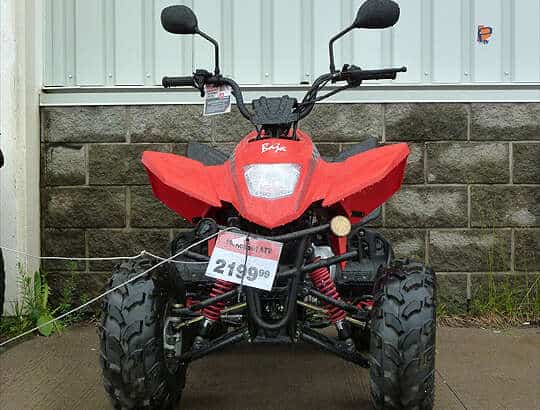 ATV death season
Legislators have to get tough with manufacturers. Because the drivers can't seem to save themselves.