Three politicians sat before an ocean Monday night, and attempted to calm the waves.

150 people piled into the basement of St. Augustine’s church in St. John’s to hear what New Democrat Ryan Cleary, Liberal Gerry Byrne and Progressive Conservative Fabian Manning had to preach about the failing fishing industry.

The debate, facilitated by the Fisheries Community Alliance of N.L., revolved around the rebuilding of the broken fishery. And themes of foreign over-fishing, rationalization, science and research and sealing were ever-present.

“Ottawa’s a long ways from the ocean, and you need people, regardless of what party they are, to ask the right questions and push for the right answers.” —Jim Winter

The guts of Manning’s response to a question of priorities “is to make sure that the fish harvesters and the people involved in the industry here have representation in Ottawa… we’ve talked to a lot of people out there who don’t believe there’s enough science and research that goes into the fishery. We’ve maintained a $30 million budget since 2006 for science and research.”

Byrne says the decision on the shrimp “unallocation” needs to be reworked before a thousand to 1,500 onshore jobs are directly impacted.

He added, “We do have to advance our voluntary rationalization program. It’s important; it’s built into my party’s policy and it was rather disappointing that the MOU process didn’t come to a completion.”

Cleary believes the keyword is rebuild, “rebuild what’s been broken because our fisheries are broken. Some sort of rationalization needs to happen, people agree with that… We need more outside-the-box ideas. We need to get our act together now, in preparation for life after oil. We’re supposed to run out of oil, we’re not supposed to run out of fish.”

Jim Winter, former host of CBC’s Fisheries Broadcast, was the moderator for the night. He admits, the debate ran rather smoothly — not exactly what he expected. No bickering, he said, just straight-shooting.

“Things like this can get out of hand and I think the three gentlemen and the audience made sure it didn’t, and they brought up a lot of interesting points. Points to think about.

“Ottawa’s a long ways from the ocean,” Winter said. “And you need people, regardless of what party they are, to ask the right questions and push for the right answers.”

Gus Etchegary, Chairman of the Fisheries Community Alliance, said following last night’s debate the alliance is encouraged to do the same thing again in a month or so.

“Stuff like marine protected areas are management tools that have worked in other jurisdictions to rebuild stocks,” —Chris Hogan

“It’s a good educational process for the public and possibly for some of the politicians as well.”

He wouldn’t say whether he was partial to either side of the table, but did mention “I’m very very interested in a judicial inquiry for the simple reason that it’s the only possible way we’re ever going to rebuild the fishery, which we have to do in order for Newfoundland to survive.”

Etchegary has been around long enough to watch over 20 Federal Ministers of Fisheries come and go.

“1300 foreign vessels and 60,000 men who, in an unrestricted fashion, fished for 30 years off our coast… There has to be a lot of transparency in terms of DFO management.”

Left waiting for the answers

Regardless of the ground that was covered during the roughly two-hour debate, some in the crowd were waiting for topics that didn’t come up.

Chris Hogan and Jack Lannon of the Newfoundland and Labrador Environment Network were disappointed no one spoke about marine protected areas.

“Stuff like marine protected areas are management tools that have worked in other jurisdictions to rebuild stocks,” Hogan said. “When you simply do not fish a particular body of water and protect it from other development… fish will come back and they’ll populate marine protected areas, then you’ll have spill-over effects outside the boundary of the protected area where you can fish. It’s not very complicated.”

Voter Wayne Holloway was waiting to hear some discussion based around the processing of fish, but says he heard little about that end of the industry. He’s tired of the old ways of putting fresh fish in a box, freezing it and then shipping it off to wherever.

“The big question, in my mind, is why do we only have 13 per cent value added to the resource after 500 years of fishing it? Why can’t we do more with it than just volume fish it and volume sell it? There’s opportunities there for young people with creative minds to take that raw resource and add some value to it, but we’re not doing it.” 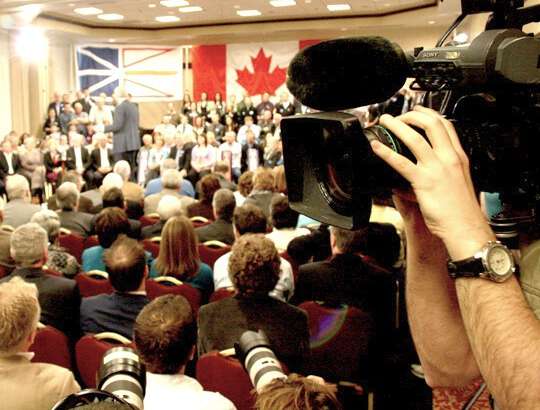 Poll predicts 100 seats for the NDP