On this day in 1914, a tragedy was unfolding on the North Atlantic ice floes.

On the morning of March 31, 1914, the wooden steamer SS Newfoundland was jammed in the ice floes off Newfoundland’s north coast. Unable to take the ship any further, Captain Westbury Kean ordered his men overboard to hunt seals.

He instructed them to head north, where the sealing vessel SS Stephano lay about 10 kilometres away. Kean assumed the sealers would spend the day working on the ice and the night aboard the Stephano – the captain of that vessel, after all, was his father Abram.

While the men ate, Kean navigated the Stephano towards a group of seals two miles to the south. It was snowing quite hard by then, but Kean ordered the men off his ship at 11:50, with instructions to kill 1,500 seals before returning to the Newfoundland. He did not invite them to sleep aboard the Stephano.

Tired from the morning’s four-hour trek, unable to see the Newfoundland, and in a thickening storm, the 132 men were once again on the ice. The Stephano steamed away to pick up its own crewmembers hunting in the north. By 12:45, blowing snow forced the sealers to stop hunting and head for the Newfoundland – if they could find it. Walking through knee-deep snowdrifts and across wheeling ice pans, the men continued until dark and then decided to build makeshift shelters from loose chunks of ice.

These, however, were little help against the night’s shifting winds, sudden ice storms, and plummeting temperatures. Many men were dead when the sun rose the next morning; others could barely walk, their limbs frozen and numb.

Many men were dead when the sun rose the next morning.

The group spent the next day and night trying to reach the Newfoundland, but with no luck. Some men, delirious, walked into the frigid waters and drowned; others were pulled back onto the ice by their companions, only to die minutes later.

Westbury and Abram Kean, meanwhile, each believed the sealers were safely aboard the other man’s ship. Communication between the two vessels was impossible; the Newfoundland was not carrying wireless equipment.

It was not until the morning of April 2 that Westbury, surveying the floes through his binoculars, spotted his men crawling and staggering across the ice. Desperate to help, but without any flares, he improvised a distress signal to alert other vessels in the sealing fleet. Soon, crewmen from the SS Bellaventure were on the ice with blankets and food.

Of the 77 men who died on the ice, rescuers found only 69; the remaining eight had likely fallen into the water. The survivors were brought to St. John’s for medical care where another man, John Keels, also died from his ordeal on the ice.

News of the disaster reached St. John’s by telegraph on the evening of April 2 and quickly spread across the island. On April 4, hundreds of anxious spectators lined the waterfront as the Bellaventure steamed through the Narrows carrying corpses on its deck.

“The vision sent a shudder through the crowd,” wrote a reporter with the Evening Telegram. “The bodies had been laid there just as they were brought in from the ice, many of them with limbs contracted and drawn up in postures which the cold had brought about.”

The tragedy caused widespread mourning and ultimately changed legislation surrounding the Newfoundland and Labrador sealing industry. In 1916, the government passed laws prohibiting sealers from being on the ice after dark and requiring all ships to carry wireless equipment and flares.

Photos courtesy of Archives and Special Collections at Memorial University. 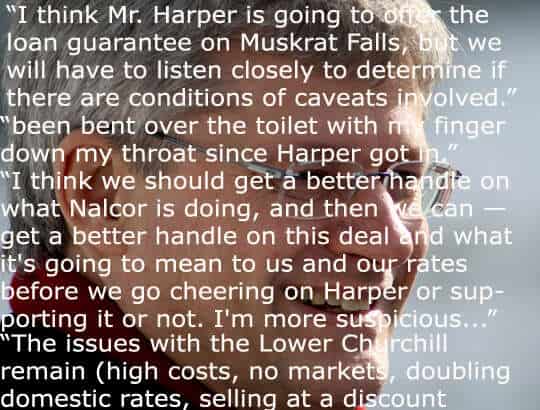 Harping on about it
We spoke to some notable Newfoundlanders to get their thoughts on the Prime Minister's visit today.

Grapes at the royal wedding?