A press for change: early newspapers in N.L.

In what is quite possibly the province’s newest newspaper, it makes sense to look back at the earliest mass media in Newfoundland and Labrador.

Whether it circulates digitally or door-to-door, it’s usually a good sign when a new newspaper starts publishing. At its best, journalism is society building. It gives us information we need, puts us in touch with a wide range of opinions and ideas, and fosters informed public debate.

Some of the first newspapers in Newfoundland and Labrador did just that. In the early 19th century, an independent press helped generate support for a reform movement that ultimately brought the vote to the colony by establishing elected local government.

In what is quite likely the province’s newest newspaper, it makes sense to look back at the earliest forms of mass media in Newfoundland and Labrador

In 1807, publisher and printer John Ryan opened the first printing press on the island. He also started circulating the colony’s first newspaper: The Royal Gazette and Newfoundland Advertiser. The publication was quite different from the modern newspapers we read today. When the Gazette started circulating, no paper or printing press could operate without the governor’s say-so. At the time, Newfoundland and Labrador did not have an elected legislature. Instead, Britain appointed naval governors to rule its overseas colony.

Although Ryan had permission to print the Gazette, all of its contents had to be approved by the governor’s office. Ryan was therefore incapable of reporting government policy and activities in an unbiased manner. The Gazette printed some local and foreign news, but most of its pages were devoted to government proclamations, public notices and advertisements.

Circumstances changed in 1814, when lawyers in London advised Keats that he could not legally obstruct the establishment of local newspapers and printing presses. It was a major step forward for freedom of the press in Newfoundland and Labrador.

In 1815, Haire and Lee began printing the Newfoundland Mercantile Journal. More newspapers circulated in the coming years, including the Newfoundland Sentinel in 1818, the Public Ledger in 1820, the Newfoundlander in 1827, the Harbor Grace and Carbonear Weekly Journal in 1828, and the Conception Bay Mercury by the end of the 1820s.

As the public became more vocal and politically engaged through the press, they gained sway over government policy.

The rise of an independent press made government officials more accountable for their actions than ever before. Newspapers raised residents’ awareness of local and international news and provided a forum for public debate. During the 1820s, many papers printed letters to the editor that either supported or opposed a local reform movement seeking an elected government. Two newspapers, the Sentinel and Ledger, openly supported the movement. As the public became more vocal and politically engaged through the press, they gained sway over government policy.

Some local citizens also wrote and published protest pamphlets in which they criticized government structure and policy. Prominent among these was reformer William Carson, who used the medium to build support for the reform movement. Carson printed the colony’s first protest pamphlet in 1811. He attacked the government as an unjust and oppressive administration, writing that a naval governor was “accustomed to receive implicit obedience, whether his orders are dictated by justice or injustice, by reason or false prejudices.” Carson circulated a second pamphlet in 1813, calling for the establishment of an elected House of Assembly.

This demand was met in 1832, when Britain granted Newfoundland and Labrador representative government. A general election took place in November of that year, allowing eligible residents to cast their ballots for the first time.

Although many factors brought about political reform, the emergence of an independent press played a vital role. Newspapers and pamphlets gave residents a way to scrutinize their form of government, compare it with others in the world, and debate whether or not change should take place.

Based on research Jenny did for the Newfoundland and Labrador Heritage Web Site.

Seeds by Hey Rosetta!
Hans Rollmann thinks you should get yourself a copy of Seeds, plant it in your stereo and feel your spirit grow 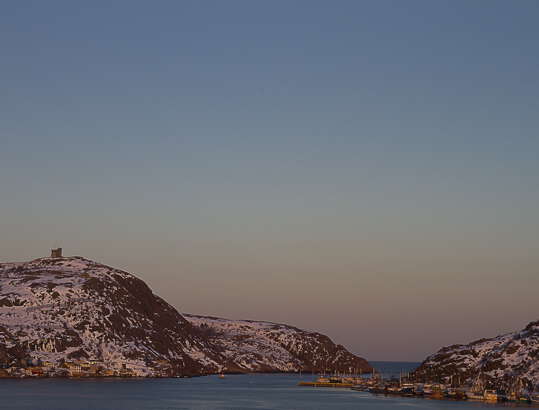 PHOTO: The view
Ian Vardy shares his view of Signal Hill with us...and his views on finding our own view