A right worth fighting for

How nice it would be if we always voted as though it’s a right worth fighting for.

A whopping 90 per cent of women voters went to the polls in Newfoundland’s 1928 general election. Compare that to the 2008 federal election, when only 58.8 per cent of the Canadian electorate cast ballots. Newfoundland and Labrador had the lowest turnout rate among the provinces – a measly 47.7 per cent, according to Elections Canada.

The difference is that in 1928, Newfoundland women knew how important their right to vote was – they had just spent decades fighting for it.

The women’s suffrage movement first took shape on the island in the 1890s. It was closely linked to a growing prohibition movement and spearheaded by the Women’s Christian Temperance Union (WCTU). The general argument was that if women had the right to vote, they would be able to reform lax liquor laws. The government debated enfranchising women in 1892 and again in 1893, but rejected the motion both times.

Defeated, the WCTU withdrew from the suffrage movement. The topic, however, did not disappear from the public consciousness. As countries around the world granted women the vote in the coming years – including New Zealand (1893), Australia (1902), Great Britain (1918), Canada (1918) and the United States (1920) – various Newfoundland and Labrador clubs and societies held debates and lectures on women’s suffrage.

Foremost among these was the Ladies’ Reading Room, which a group of St. John’s women formed in December 1909 after a fraternal society banned them from its suffrage debates. While at the club, women read international newspapers, debated current affairs and attended or delivered lectures. According to suffragist scholar Margot Duley, the club acted as an informal university that helped politicize a generation of influential women.

The outbreak of World War One delayed the suffrage movement, but it also provided suffragists with a powerful argument for their right to vote. Thousands of women from Newfoundland and Labrador joined the Women’s Patriotic Association (WPA), which formed in 1914 to support enlistees and their dependants at home. Unlike in Canada and the United States – where women often contributed to the war effort by joining the industrial workforce – the WPA promoted what was widely considered traditional women’s work: knitting, nursing and raising money for charity.

By the end of the war, the WPA had raised more than $500,000 – worth about $6.5 million today – and was lauded by government officials, the press and public. It had also demonstrated that women’s traditional work was of tremendous social and economic importance, which helped to justify the suffragist cause. If women contributed so much to society, shouldn’t they also have a say in its governance?

The Women’s Franchise League formed in 1920 and launched a publicity campaign to promote the suffragist movement. It received growing support from the press and public, but not from the Richard Squires government; in 1921, the legislature debated and then rejected a bill that would have given women the right to vote.

The league did achieve a degree of success that year when St. John’s granted the municipal vote to women who owned property in the city. Many women, however, were still excluded from voting because it was usually their fathers and husbands who owned the land on paper.

The next few years saw the suffrage movement build strength. The Squires government collapsed in 1923 amid charges of corruption and was replaced in 1924 by a new administration, led by Walter S. Monroe. Aware that Monroe and some of his cabinet were sympathetic to the suffragist cause, league members once again lobbied government officials for support.

Monroe introduced a franchise bill to the legislature in 1925, which passed unanimously on March 9 and became law on April 13. Women across Newfoundland had finally won the right to vote and run for political office.

They participated in their first general election on Oct. 29, 1928. On that day, 90 per cent of all eligible women voters cast ballots. How nice it would be if we always voted as though it’s a right worth fighting for.

Based on Jenny’s article for the Newfoundland and Labrador Heritage Web Site. 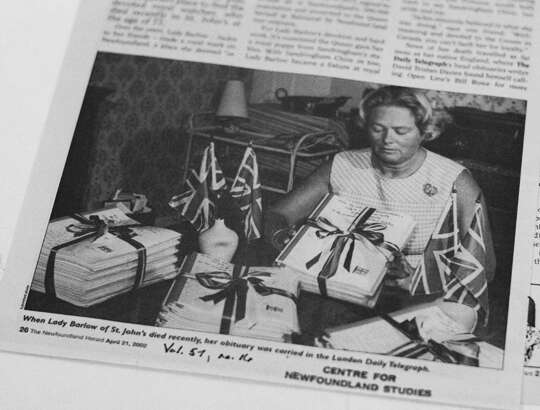 Whither the monarchists?
What became of the Monarchist League of Newfoundland?