There’s lots of important information in this summary of the compressed summertime Council meeting, but mainly: The Ship is getting a deck.

A heavy agenda this round due to Council’s bi-weekly summer schedule; fewer meetings mean more content for me to sift through for you, dear readers, to find out what you should give a damn about for this two-week period.

The Winter (Avenue) of Our Discontent

First up on the agenda was the question of whether to approve the construction of homes at 6 and 8 Winter Avenue. The two lots—which are on the north side of the street, away from the river—are precluded from development due to revised flood plain mapping, which has been updated to reflect the impacts of climate change. The lots were approved for development before the mapping was revised, and there is residential development on both sides of Winter Avenue, including the side which is closer to the river. The proposed dwelling that prompted this agenda item is in the buffer, rather than the floodplain itself. While the lots were zoned residential low density and already approved for development, the floodplain mapping trumps the zoning in terms of what is allowed there.

There are plans to install berms on the river which will again change the mapping, after which the lots will no longer be in the floodplain or buffer—altering what development can be permitted there. The capital project to install the berms is currently undergoing provincial review, meaning God only knows when (or if) it will be approved.

In spite of the mitigating factors, the City’s Environment and Sustainability Experts Panel voted unanimously to reject the application, explaining that while there are plans to install berms and other measures to prevent flooding, these are not fail-proof and some risk remains. The ESAP’s position is that Council should prevent development in the hazard zone and help manage the risk to owners of existing property. Implied seems to be that any additional development increases this risk.

The staff recommendation from the decision note, however, is to allow development in these two lots, “as a solution to a difficult situation for two property owners who have been affected by updated floodplain mapping. Their properties are on the north side of Winter Avenue, away from Rennie’s River, and there are already houses in the buffer and in the floodplain on the river side of the road.” Staff, it would seem, have greater faith in the plans to place berms along the river than the experts panel does.

This falls in line with many recommendations of staff—which seem to generally get approved by Council—to make decisions based on planned changes to the regulations while those changes are still in process. Council agrees by unanimous approval.

A slew of building line setbacks, parking relief matters, and other development applications dominates nearly the entire first hour of the meeting. Council says yes to the Newfoundland Embassy on New Gower Street’s request for  parking relief associated with their new rooftop deck; no to an application for a parking area on the Foxtrap Access Road. The Ship Pub has applied for a deck (!!) located at the rear of the building. Cllr Skinner raises the concern of a neighbouring business about noise and proposes an amendment on their behalf that the patio be restricted to after 7:00 PM on weekdays; Cllr Korab points out that this would largely defeat the purpose: “I don’t think I can support the amendment, tellin’ ‘em you can’t have an eating area open during eating times.” Other council members agree.

Mayor Breen suggests that Cllr Skinner could defer the decision and convene a discussion between the owners of the Ship and the law firm who is concerned. Skinner seems agreeable, but then Deputy City Manager of Planning and Engineering Jason Sinyard chimes in to remind Council that they have, in fact, already approved this application via E-Poll, meaning the approval is already in place and has been communicated to the applicant. The amendment is out of order since the application is only on the agenda to ratify an approval already given.

Mayor Breen asks that items approved by E-Poll be included in the agenda, ostensibly for members of council who can’t remember what they’ve already agreed to and haven’t thoroughly read the agenda in advance (which, it turns out, is a non-zero number of councillors). Staff agree that they will make it a separate section of future agendas. Motion approved, with Cllr Skinner voting against.

Thanks but No Tanks

Bannerman Brewing has applied to install four large tanks at the exterior of the building to increase their brewing production capacity so they can sell their beer at the NLC. The proposal is to install four 18-foot-high tanks on a concrete pad, two feet from the nearest property line. In response to the notice soliciting feedback on the application, a dozen or so neighbours unleashed a litany of verbose complaints about current happenings at the brewery and the perceived impacts of this addition. Staff’s opinion is that the tanks do not correspond with the definition of Light Industrial use from the development regulations: “…must be carried out without detriment to the amenity of the surrounding area by reason of noise, vibration, smell, fumes, smoke, grit, soot, ash, dust, glare or appearance.”

Cllr Skinner suggests, following a request in the submissions from neighbours, that a public meeting be held. Cllr Burton suggests that it would be useful for that to happen separate from the application to discuss current issues and future plans for the brewery. Skinner agrees. The application is rejected by unanimous vote.

Moving on to items from Committee of the Whole two weeks ago: the Inclusion Advisory Committee asks that bikes, skateboards, and other such apparatuses be banned from the pedestrian mall. Cllr Stapleton moves the staff recommendation instead, that, “Safety education protocols be reviewed and implemented with pedestrian mall staff.” Cllr Hanlon has gotten complaints about unsafe biking, which Cllr Stapleton implores residents to report to 311 so that there is a record thereof. Cllr Korab notes that no one was hurt by a cyclist or skateboarder in the pedestrian mall last year.  For the moment, bikes, scooters, and the like will continue to be permitted, since the motion carries with only Cllr Stapleton voting against.

Next on the agenda, following from a petition presented by Cllr Hickman, the question of “the request of some residents for a waiver of some or all of the sidewalk along Frampton Avenue.”

The backstory seems to be that some residents bought houses; they also bought large vehicles. The size of the vehicles they bought was too large for the driveways of the houses that they bought. Because of the incompatibility of these two decisions which they, themselves, freely made, they want there to be no sidewalks on all or part of their street so that their vehicles can extend past the end of their properties and into the public roadway, without getting tickets for overhanging the not-yet-installed sidewalks. Sidewalks which are required to be installed by the approved plans for the subdivision.

It’s incredible that a petition with ten signatures on it can spark this much discussion and the associated use of staff time to put together the decision note and related documentation. Let’s remember that city staff time isn’t free and every frivolous item brought forward to and by council costs money that might be better spent elsewhere.

The minimum setback in this zone (R1) is 6 metres; developers can set the dwellings further back if they wish, but this is the minimum. The length of driveway on the property one selects is a personal choice, as is the kind of vehicle one chooses to drive. Per DCM Sinyard: “there’s an onus on the homeowner to set their house on the lot in accordance with the type of vehicle they want to own.” In a sensible world this would have been the entire conversation.

Sinyard points out as well that the area planned for the sidewalks is nevertheless City-owned land and not there for property owners to use as a de facto driveway extension free of charge. Cllr Hickman claims, despite 20 years of council experience, that this is the first he’s heard of the possibility of locating houses further back than the minimum. He continues to argue in favor of the application saying, “everything’s different. I understand everyone’s trying to follow the book here […] but there’s a perceived problem on the part of residents.” Cllr Burton points out that the minimum setback can accommodate many large vehicles, and that if someone wants to own one of the largest vehicles on the planet, they can choose a home with a larger setback. Burton’s motion to require the sidewalk to be built passes with Cllrs Hanlon and Hickman voting against.

Speaking of minimums, rear yard requirements in the downtown are changing to 3.5 metres from the current 6 metres, to reflect the real nature of properties and provide opportunities for densification while maintaining enough space for emergency services to access the back of the properties if required for safety reasons. Cllr Skinner mentions anecdotally that he knows of properties that can’t be developed due to rear yard requirements even with this change; I might suggest that he means, “can’t be developed in the way the owner wants to develop them,” which is different.

Quidi Vidi is getting pedestrian-only zones on the weekends for non-residents but keeping two-way traffic, with the addition of traffic calming measures. The City conducted a survey of residents and businesses where a variety of options were considered: one-way or two-way traffic, seven days a week or weekends only. The approved plans look like this, from noon-10 PM, Friday-Sunday: 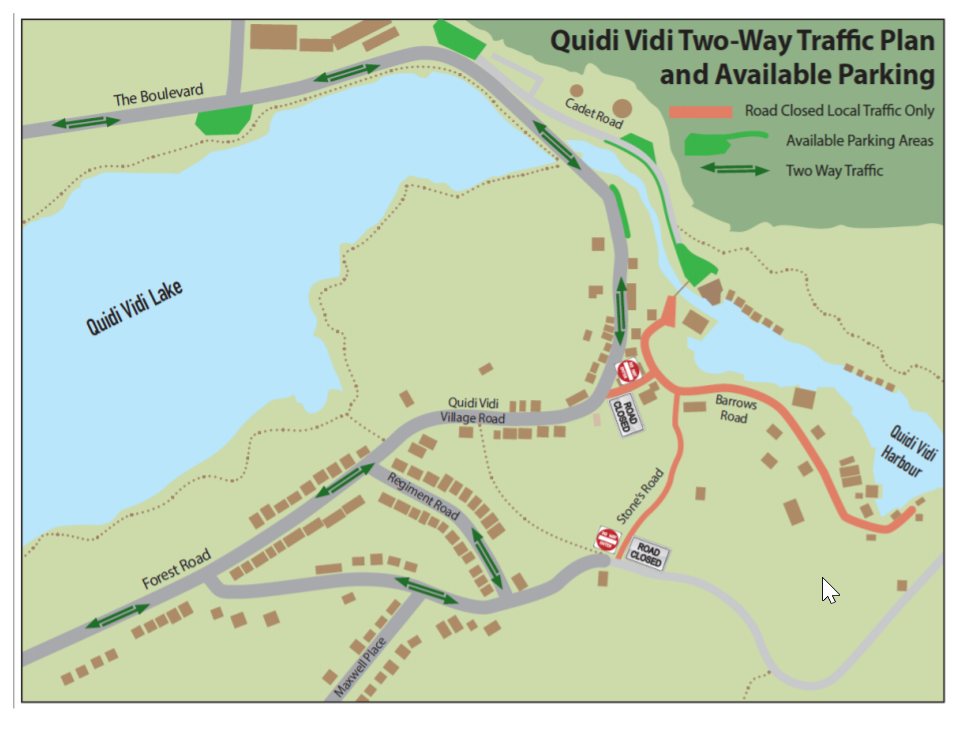 68 Queen’s Rd. will have its heritage designation removed, with the requirement that the heritage archway—which represents the only surviving character-defining element following a fire in the 1960s, be reused in the new development on the site. The Built Heritage Experts Panel (which, like the aforementioned Environment and Sustainability Experts Panel, is a group of independent experts and meant to be impartial) recommends effectively holding up the development and not issuing permits until plans are approved showing how the archway will be incorporated into the final design.

The staff recommendation takes a slightly different tack, which still requires that the heritage elements be included, but allows for the demolition permit to be issued while the plans for the townhouses are being drafted. In either case, the archway will have to be taken apart carefully and its components stored until they form part of the homes which will replace the parish hall.

Ayre’s Cove—which is more or less closed due to the pedestrian mall anyway—gets the go-ahead for a closure to allow for a “Vertical Wall Dance presentation” by Cirque’letics School of Circus Arts. Circus artists will be doing cool stuff in the air on the side of Atlantic Place.

The pedestrian mall continues to be a jumping-off point of an abundance of excellent stuff happening in this late-pandemic summer. On August 21st—28th if it rains—we can gather in appropriate-sized groups in the street to watch these feats of gravity-defying grace.

Hope Jamieson served as Ward 2 Councillor from 2017 to 2020. She works in the affordable housing sector, and is dedicated to poverty reduction, social equity, and inclusion. She lives in St. John's with her partner and their three children.

So Moved, St. John’s: 26 July 2021
To continue extoling the virtues of the sidewalk clearing program while people with mobility issues are housebound during the winter months is nothing short of…