Take a moment to lean in and listen to what’s happening around the council table. The little bit of normalcy, routine, and poking fun might cheer you up.

Last week’s meeting was cancelled at the 11th hour, which was probably a relief for everyone involved (including me). If you’ve watched Stranger Things, you’ll know what I mean when I say that since the lockdown began on Friday, February 12th, it kinda feels like we’ve been pushed through a dimensional gate into The Upside Down.

Given the glitchy electoral circus that is unfolding province-wide, and the mental and physical health implications of the B117 variant outbreak for everyone in our community, city politics hardly feels worthy of anyone’s focus at this moment. But, perhaps that’s exactly why we should take a moment to lean in and listen to what’s happening around the council table. The little bit of normalcy, routine, and poking fun cheered me up. Hopefully it will for you, too.

On the agenda today, we had some imaginary, virtual champagne for Heritage Award winners; a smattering of development applications (including some new businesses!); some confusion about whether insects are animals; and, *gasp* a handful of townhouses proposed in Kenmount Terrace.

Where’s Yer Roots, Now Das What I Wants To Know!

Whoever’s computer was being used to livestream the Council meeting, well, they kept getting eSCRIBE instant messages pop up on-screen. This was quite amusing. Here, we see Chief Planner Ken O’Brien wishing everyone a Happy belated Heritage Day! Adorbs.

Awards given out for Built Heritage this year are as follows: 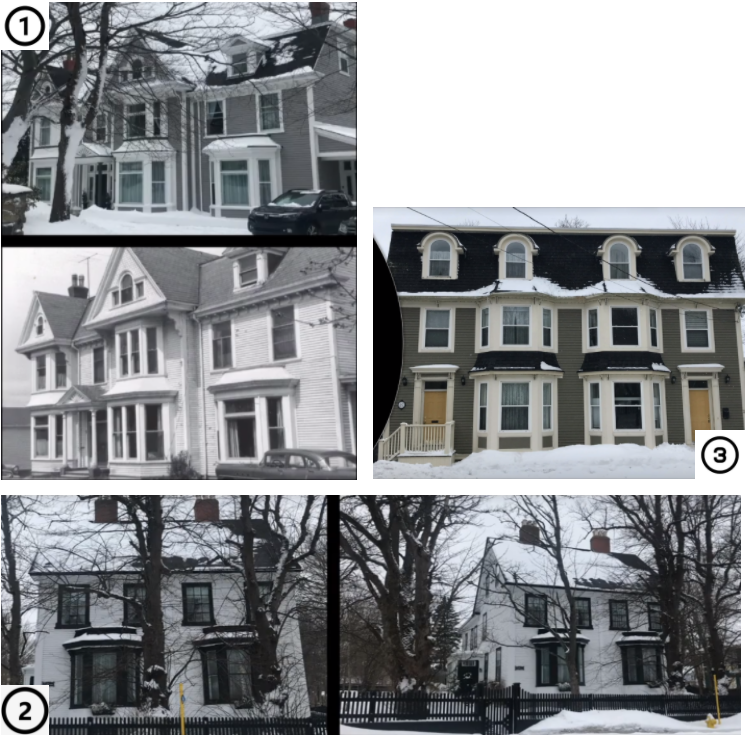 Mayor Dan reflected with whimsy on his days walking past Canada House on the way to St. Bons and Brother Rice. Proper Corner Boy he is. It’s a ‘job well done’ from him, to all the award winners.

It’s as if they think, upon catching a whiff of self-employment, that any potential buyer of their homes in The Earldom of Guzzwell would be granted a pardon from the King to pay less money for their residential nest-egg. It’s like they’re saying that anyone who works a home-based business, or rents, doesn’t deserve to exist near them.

They even went so far as to say that “children and pets will be on the street [during the operational hours of the business]” and the increase in the volume and flow of traffic is a concern. One additional car entering and exiting the neighbourhood. At a maximum of once every two hours. People really will go to any length in trying to hold an iron grip on their static sense of a neighbourhood.

I wish the new business owner all the success.

What used to be Piccadilly, and then Crazy Horse, has been set to become Brewdock Bar & Eatery since March, 2020. Presumably, Covid has gotten in the way of this beer garden’s grand opening.

It seems that the extra time has given the lads of Tap Wagon Inc. (owners of Brewdock) pause for thought, and they now want to change their indoor operating hours on both ends. They’re requesting permission to open at 7 a.m., and to close at 1 a.m. Sunday through Thursday, and 2 a.m Fridays and Saturdays, for special events. Staff noted, “These proposed hours of operation would also be in line with a similar type of business [Bannerman Brewery] across the street.”

When the proposal for Brewdock first landed on the scene, there was significant pushback from residents of the area, including a petition. This amendment doesn’t seem to garner the same kind of opposition, but most residents made it very clear that breakfast café hours were fine, but they didn’t agree with the bar staying open until 2 a.m.

Another Serving of Classism, Sent Back to the Chef by Council

On February 4, a public hearing was held to explore how scary it might be for everyone if three, two-storey townhouses were built in Kenmount Terrace.

Although the city had heard from fear-mongers back in October, who indicated their intended attendance, independent Commissioner Glenn Barnes and two members of the City’s planning department were stood up at the virtual hearing. Rude!

Right now, the property (138 Ladysmith Drive) is zoned Residential Narrow Lot (RNL) where the only housing form permitted is a Single Detached Dwelling containing only 1 Dwelling Unit. Classist zoning. Blegh. RTO Capital Inc. has requested amendments for a rezoning, to Apartment Medium Density (A2), which would allow the townhouses.

Opponents of these townhouses cited concerns over increased traffic, “CRIME,” and a perceived reduction in property values. Several also seemed to think that the only reason for such a development is greed, on the part of the developer, to sell the greatest number of units.

I’ve said it a thousand times but will not tire: density is healthy, and single-detached dwellings are not for everyone. People living in a community with different budgets and preferences shouldn’t be hived off from one another. Think about the future owners or tenants of these properties, and their needs, too! I’m all too relieved that developers are pivoting to meet demand for smaller, more sustainable homes.

The independent Commissioner recommended approval via the necessary Municipal Plan amendment—the “re-zoning is consistent with the envisioned mixed residential housing for the area.” And Council so approved.

The city stocks John Deere parts for its fleet, to ensure accessibility as required. Cllr Hickman moved to approve Brandt Tractor Ltd. for $96,112,62 worth of parts, over a 2 year period (with option to extend for 2 additional 1-year periods). These guys hustled to win the contract—they quoted far more line items than their competitors: Harvey & Company, Colonial Garage, and the honestly-named Parts for Trucks.

“Keeping it in the animal realm,” Cllr Hickman continued on with a bid approval for Caterpillar parts, from Toromont Cat, at $102,831.36 for 1 year (option to renew for 1 additional 1-year period). This crowd was the lowest and only bidder. A Darwinian disagreeance ensued:

Cllr Hickman: “From Deere Parts to Caterpillar Parts [get it?!]…”

Cllr Hickman: “Ah, part of the animal kingdom, though.”

Cllr Hickman: “We won’t get into that discussion any further.”

Main photo by Graham Kennedy. All screenshots provided by the author.

So Moved, St. John’s: 9 February 2021
A decision on Voting By Mail, a sketchy attempt to knight Doc O’Keefe onto the Transportation Commission, and movement on the Parish Lane Development.

Election Chaos Latest Barrier for Indigenous People in Labrador
In Labrador, the election fiasco adds another layer to the inequities imposed by a government founded on the denial of Indigenous peoples’ rights.