A decision on Voting By Mail, a sketchy attempt to knight Doc O’Keefe onto the Transportation Commission, and movement on the Parish Lane Development.

They really made up for the previous three weeks at this meeting. I’m not used to the stamina required to get through a 2-hour Council meeting anymore.

We had a pleasantly surprising change-of-heart from the majority of council—you won’t have to go through the drudgery of manually registering for a Vote By Mail kit in city elections. (Thankfully this is not the purview of Elections NL.) We’ve also got a sketchy attempt to knight Doc O’Keefe onto the Transportation Commission, and some movement on the Parish Lane Development application.

Answer me this: what do cruise ships have to do with public transit? It seems to me that tourism marketing is a very different skill-set from that which is needed to revitalize the Metrobus. Coaxing a local population of residents to ride the bus instead of driving their personal vehicles is slow cultural change. One that also requires investment to improve service.

No offence to Doc, but when he set out to make St. John’s a destination on the cruise circuit, he had a beautiful, market-ready product to sell—downtown St. John’s. The same cannot be said for Metrobus. Townies and tourists alike are, generally speaking, sorely disappointed with the archaic capacity of our public transit. We need a very different kind of marketing strategy here. Anyway.

Do you think Doc’s cruise-ship-seducing skillz are why Cllr. Skinner shamelessly pushed for him to sit on the Commission? What the heck is going on there?

In the Committee of the Whole (CotW) on Wednesday, January 27, council discussed a proposal from staff about municipal elections, spurred on by the Ward 2 By-Election. Along with increasing the number of polling stations and reaffirming a commitment to lobby the Province about alternative, progressive voting methods, the proposal included changes to the Vote by Mail (VBM) process. It suggested that voters be required to register before each and every election in order to receive a VBM kit.

The two main arguments for this change were efficiencies achieved through a streamlined process of mandatory voter registration, and reduced ballot insecurity. Through elaboration from staff during the debate, these arguments were proven moot. First, money saved on mail-outs would be spent on extra in-person polling stations. Second, looking at numbers from the Ward 2 by-election as an example: of the 5479 ballots cast there were 65 rejected ballots—zero were duplicate votes or from invalid voters.

Mayor Breen, Cllr Burton, and Cllr Froude were the only ones who voted against this proposal. The rest, at that time, felt it was quite a reasonable change.

For an excellent summary and analysis of this discussion, I encourage you to check out Whymarrh Whitby’s blog post, that includes video recording clippings for each councillor who took part in the debate.

Fast forward to the meeting on February 9, and Council was singing an entirely different tune. This means that you don’t have to worry about registering for a VBM kit for future municipal elections. It will continue to come automatically in the post, as it has for the last 20 years.

Since the CotW meeting, there’s been a total conversion to a barrier-minimizing consensus. I reached out to the councillors who changed their minds, and heard back from two.

“After giving it some thought and the feedback (not push-back), given that the election is only 7 months away, I felt that there wouldn’t be enough time to communicate this to the public.

Also, given that we’re still in a pandemic and will still be feeling the effects come September, I felt we needed to give residents every chance to vote.

With people in isolation now, there could possibly be people who are unable to vote in the Provincial Election (unless Mr. Chaulk can figure something out). I would hate to make a decision now that could put people in the same situation come September. Basically, now is not the time to implement this change. I do feel however that it’s something the next council should revisit.”

[…] To me, ballot insecurity is a big issue and a potential problem. However, after hearing the viewpoints of others and their concerns and reasons for not adopting mandatory registration, I decided to change my perspective and vote against the recommendation.

The issue of Covid-19 public health measures on the upcoming provincial election did not influence my decision.”

I think it’s very interesting and encouraging to see that decisions at the committee level are not the ‘end all be all’. Oftentimes, municipal councils vote in accordance with conclusions from committees. The way this issue went down is good reason for you to not give up hope before Council has had its final vote on something. Stay engaged ‘til the end.

It’s also important to point out that the 3-part proposal brought forward in the CoTW was broken into three individual motions during the Council meeting. This made it a lot easier to move forward with the good stuff, and leave behind the bad.

The bundling of unconnected items into one single motion is a practice of concern. Sure, it makes things faster, but it also creates inertia to push something through that is less likely to pass on its own. Something to keep your eye out for.

That’s seriously what happened. Why did this happen?! It’s so disconcerting.

TL;DR—He was shut down by the rest of Council.

In a Special Meeting on November 6, 2020, Council approved permission to advertise for two new public representatives to the St. John’s Transportation Commission—the organization that runs Metrobus. A sub-committee was struck to review submissions.

From the 14 applications, Lynn Zurel and Tolulope Victoria Akerele were recommended for appointment, and a motion was made to approve by Cllr Korab.

Then, Cllr Skinner raised a concern—based on what he was told in follow-up discussions with the City Manager—that none of the current, or newly proposed, commissioners have expertise in marketing.

He suggested, “council look to have Dennis O’Keefe [one of the applicants for the transportation commission] appointed to the board to provide the expertise of some marketing experience, given the background he’s had with the Cruise Association and how that was promoted and marketed.” He moved to refer back to the sub-committee for this reconsideration.

Once debate was opened, Cllr Froude explained that when he and ex-Cllr Lane were on the Commission, they set up a sub-committee for marketing that would create space for Commissioners to interface with staff and enhance marketing for public transit in the city. The long-term plan was to bring in further marketing expertise to that sub-committee, from people who would not sit as members of the Commission.

Cllr Burton tells us that there were quite a number of strong applicants, and the two recommended individuals were chosen after much careful deliberation.

Getting to the heart of the matter, Cllr. Burton then added, “Given the amount of thought that was already put into this, I’m very, very concerned that referring the matter back to the sub-committee is just going to delay getting these bright minds in the room and start the work they need to do to make the bus system better in St. John’s and surrounding areas.”

Cllr Hanlon was breaking up on the line (which was too bad because it sounded like she had some interesting things to say), but she was making similar noises to Cllr. Burton. Similarly, Mayor Dan said he’s made it a practice to trust committee recommendations for board appointments.

Cllr. Skinner voted in favour of his own motion, and he was the only councillor to do so.

From all appearances, this was a bold-faced attempt at cronyism. Cllr Skinner is currently leading election preparedness for the provincial Progressive Conservative party, and served as PC MHA (and a minister in the cabinets of Premiers Danny Williams and Kathy Dunderdale) in the early 2000s. Doc O’Keefe is a longtime member of the PC party, and publicly supported Shawn Skinner in his 2011 provincial election campaign.

The controversial development on the site of the Anglican Cathedral Parish Hall and green space was back on the agenda on February 9.

They addressed the following two items only:

The three townhouses on Queen’s Road are being proposed instead of a second apartment building. This change from the developer is directly in response to 2019 public consultations. This new plan would also see the existing historic residence on Queen’s Road stay in place.

Current zoning along Queen’s Road is Institutional, and along Harvey Road, it’s Open Space. “These zones don’t permit this type of development,” explained Cllr. Burton, which is why the rezonings were before council.

Moving forward with the development as proposed on Queen’s Road would require the removal of Heritage Designation, and demolition of the Parish Hall itself. It’s important to note that a fire in the 1960s damaged the Parish Hall extensively, and according to Cllr Burton, “there’s not really anything left there in terms of the original building.” This seems to be a pretty low-tension move. 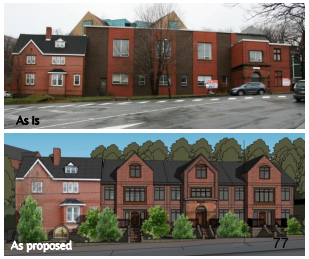 As for the Harvey Road apartment building—it’s a lot more tangly. There were over 500 pages of attachments to the agenda, on all manner of responses to the Parish Lane Development. If you’d like to take a dive into the expanse of heated concerns, there’s a good summary on page 4 of staff’s Decision/Direction Note.

The creation of a site-specific zone is done “anytime a general zone might not give us enough control,” said Cllr. Burton. Rezoning in this way, for the apartment building portion of the development, creates a high level of restriction. It would mean that development would have to match the adopted site plan, “giving [consideration to] the sensitivities of the area and the concerns from stakeholders surrounding it, including The Rooms, and the churches, and the residents,” she explained.

The roofline of the proposed apartment building has been lowered since the original plan came out, to a height of five storeys above Harvey Road.

Council moved forward with both items. The only dissenting vote came from Ward 2 Cllr Skinner, because of the piece regarding the rezoning of the apartment building portion of the site. He mainly cited extensive complaints from Ward 2 residents about the size and scale of the proposed building. He hopes, “we’ll be able to continue to do some work with that to make it a more appropriate development that the residents can support themselves, and ultimately I would be able to support.”

A precious City Council meeting moment is brought to you by a cameo from Simon Froude, and Cllr Burton’s mad peek-a-boo skills.

Also, we will not be passing along any potential savings connected to the fancy street lights in Galway to the developers (who forgot to put that in the agreement that they signed with the city). Please keep DEWCor in your thoughts and prayers during this difficult time.

Cllr Korab’s vote on the St. John’s Transportation Commission matter was interrupted by someone blowing bubbles at him. Speaking for parents everywhere, Cllr Burton quipped, “It’s hard when you got cute kids, b’y.”

Main photo by Graham Kennedy. Screenshots supplied by the author.

“To anyone starting over”: A review of Last Fish, First Boat
The film draws parallels between the 1992 cod moratorium and the realities of modern-day Newfoundland and Labrador.

So Moved, St. John’s: 22 February 2021
Take a moment to lean in and listen to what’s happening around the council table. The little bit of normalcy, routine, and poking fun might…