Babies on the homestead

The first day of spring brought the arrival of three baby goats to the McBride homestead. This is Maple’s story of her journey through pregnancy to birth and the joy of the arrival of the babies.

Let me take you back, about five months ago — our buck goat Cornelius was in full rut. He can be a bit of a handful when he’s in rut — a bit possessive of his ladies, a bit stinky, and a bit more aggressive than his usual mild-mannered self. He’s got a one-track mind when he’s in rut, thinking only of his ladies and procreation.

He has his own enclosure situated about 30 meters from the ladies, but that was not good enough for him on this particular October day. He rammed the enclosure door, letting out these wickedly loud ‘BAHHHS’, as if to say, “I’m too far away!” Bang. Bang. Bang. Ram, ram, ram. His horns pushing, knowing exactly where the weak spot was, the door. It finally gave way and out he pranced to freedom!

At some point I remember thinking to myself, good, it’s finally quiet — and then, oh no, he goes quiet! I ran out and found him over by the ladies — actually, on the ladies, and he was doing his business. Just like that we were expecting babies five months from then.

What to expect when you’re expecting

It was December when we knew for sure that Maple was pregnant. She was all of the sudden much bigger, still her happy, playful self but putting on weight quickly. In late January her milk bags started to descend and fill up, so we thought to ourselves it can’t be long now. Her appetite increased significantly and she started trying to ‘break in’ to the food containers; it seemed like she was always hungry. Supplied with never-ending hay, and still hungry, hungry, hungry, it was then that it crossed our minds that Maple might be having more than one or two kids. Goats usually have one or two kids, and sometimes triplets, but rarely more.Maple had given birth to two twin boys the year before, so we knew what a goat holding twins looked like, and she was already bigger than that.

In late February Maple decided that her normal tricks like standing up on two legs for treats, or shaking-a-hoof, were too difficult now, and we knew that the latter stages of pregnancy were near. At this point her milk bags were swollen and already hanging, she wasn’t going too far from the barn and refused to go up hills or stairs unless a delicious treat was involved (Maple will do anything at all for a favourite treat).

We bought a baby monitor and installed it in the barn so we could hear her call out when it was time. During the first night that monitor was installed we must have been up a dozen times to check on her — she just kept grunting; I was sure those noises were contractions. I was wrong. It wasn’t time yet and the noises were just sleepy Maple goat grunts. She sure had us fooled — that whole week she must have been baffled by our constant entering the barn at 3 a.m. for a check-in.

During the last three weeks of her pregnancy Maple’s body changed shape, her hips lifted higher, her milk bags swung done to her knobby knees and her tail detached. She stayed very close to the barn, only coming out when she thought she might be missing something exciting.

Spring is in the air, and in my hands

It was about 8 a.m. when the noises from the baby monitor alerted us that something was happening. We could hear Maple grunting, with a few soft ‘bahhhs’, but it was Goldie (Maple’s mom and dedicated doula) who actually brought it to our awareness by answering Maple’s grunts. We quickly grabbed our ‘birthing bag’ consisting of the blankets and towels set aside for drying off the babes when they arrive and my camera. We had also prepared a separate kit with medical supplies and our vet’s number (just in case) — thankfully we did not need the latter.

When we arrived in the barn Goldie looked as if she was hugging Maple; one neck intertwined with the other, Goldie was ‘bahhing’ lightly and Maple was just looking at us with those big soft brown eyes. She was in between contractions and looked relived to see us. We looked at Maple’s backside to see if the pre-birthing sac was visible; it was not, but the area around where she was standing showed signs of it. Goldie must have cleaned it up right away, making sure that no predators could smell the arrival of the babes. Cornelius was waiting patiently by the outside of the barn, very interested in what was happening inside, but also very shy and reserved. I’m not really sure he knew what to expect! We put Goldie outside with Cornelius and they both waited by the barn door, Goldie pacing back and forth, letting out small ‘bahhs’ every so often. I could tell that she was worried about her daughter Maple having a safe delivery.

Maple let out a loud grunt and dropped on her side, and that was it. Mere minutes later, Steve caught the first little kid. She came out easily with two little hooves first followed by a head with a little pink tongue sticking out. Steve quickly wiped off the birthing fluid from the face and mouth and handed the wee little package to me. We named her Spring, as she was the first one born on the first day of Spring.

This little baby goat was just the most adorable goat you ever saw. She looked a lot like a little lamb, all white but with brown on one side of her face and a brown little eye patch. One floppy ear was all pink (but later turned white) and the other ear was half brown and half white. Maple’s motherly instincts kicked in right away and we held the baby out to her so she could lick her clean. We had about 20 minutes between her and the next baby’s arrival, and in that time our little baby was up on her feet and trying to milk from mom. The colostrum milk, which the mother goat only produces in the period after birthing, is the most important for them to have, as it is loaded with immune-boosting properties essential for a healthy kid. We were excited to see her trying to latch already, getting her first drink.

Kid number two came out just as easily as the first one, this one was a boy. Again, Steve was on hand to help catch and pass me the wee one to clean off. He was loud right out of the gate and was on his unsteady hooves within minutes, but he couldn’t find where the milk came from, and kept trying to milk the front of mom. We had a chuckle and settled him under Maple. When he heard his sister drinking he was able to find his way to the source. So much excitement, but we weren’t quite done. After another birthing sac there was more activity — number three was on its way! I moved all the wee goats over to Steve and got ready to coach Maple through her next delivery.

The third one was a bit more difficult for Maple, as I could tell she was getting tired. With one loud grunt and a large push the little one came half way out fully encased in his amniotic fluid sac, which made time an important factor in his survival. Maple had another contraction and pushed hard but this little kid didn’t seem to want to move from his halfway position. With the next contraction I helped by holding and guiding it out. Fully encased in its amniotic sac, the kid was neither moving nor breathing, leading to a few tense minutes as we very quickly broke open the sac and cleaned out his mouth, and with a splutter he began to breathe. He was by far the biggest of the three and we were happy to hear him squeak out some ‘bahhs’.

Throughout this amazing experience Maple could be heard talking to her new arrivals and seen giving them all licks. She pressed her nose against them and tried to use her hooves to guide them under her belly, it was clear she knew the importance of them milking right away.

We picked up each baby individually and showed them to both Cornelius and Goldie, who were waiting patiently outside. Cornelius was very curious and surprisingly gentle, and he still is to this day. Goldie (Nan) was as proud as any grandparent would be and excitedly went in to help groom Maple.

With the arrival of the last baby we packed up mom and the kids and took them inside our house. It is important that the babies stay nice and warm during their first day and given a safe place to find their hooves. We were a bit worried that Maple might chose to reject one as she only has two nipples to draw milk from, however our fear was misplaced — she turned out to be all inclusive and very attentive to their individual needs.

Everyone slept long and soundly the first day, waking up only to milk and then fall back asleep. It was interesting to watch the progression of them on that first and second day, they went from being only ‘mom-centric’ and self aware to being aware of their siblings, us and their surroundings. By the third day they were prancing around with or without mom nearby.

We were excited to share the news of the triplets birth with all of their friends and fans on the Goldie, Maple & The Southside Goats Facebook page, and the baby goats were featured across several media outlets. They were born on the first day of Spring, a really happy occasion for us and the community that supports and loves them. We decided we would ask Goldie, Maple and Cornelius’ ‘Facebook friends’ to vote on what they thought the two boys should be named. In the end goat number two was named Sonny and goat number three (the biggest) was named Fergus.

They are almost six weeks old now and a never-ending source of joy. We’ve built them a playground of wood planks, made of scaffolding and old tires, to play upon. They spend hours each day running up it and jumping off the top. I think watching them makes for a better show than anything on TV. Goldie (Nan) has taken to watching them mid-day so Maple can take a well-deserved break to munch on bark and other goodies in the yard. We have decided to keep our little Spring goat but adopt out the other two boys, who’ve been wethered and are absolutely a joy! As much as we would love to keep them all, a herd our size with a breeding buck will generally only tolerate one adult male. They will be with their mother until mid-June or July while they learn to eat solid food, forage and all the goat-isms that only mom, dad and Nan can teach them. 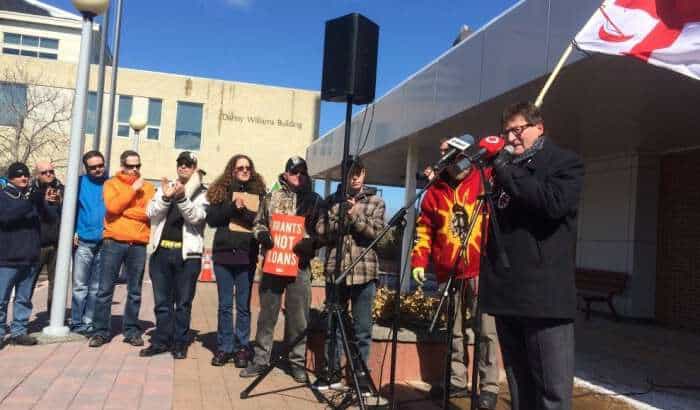 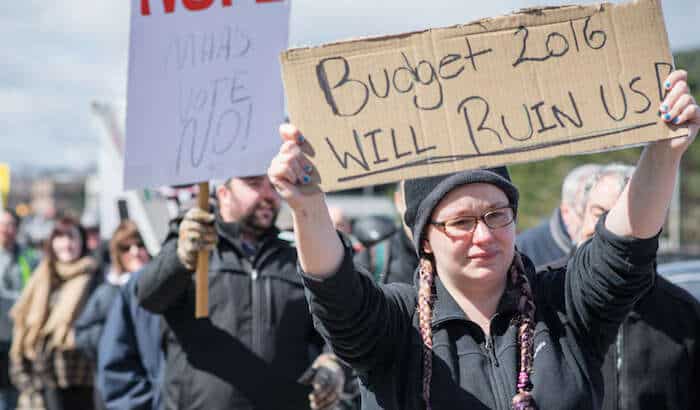 If you love this province
Newfoundland and Labrador needs its young people now more than ever.