Lovage, sometimes known as sea parsley, is so obscure nowadays that it can’t be bought at your typical grocery store — but it once enjoyed wide popularity. Let’s discover some of the wonderful things our ancestors, from Nan all the way back to the Caesars of Ancient Rome, have done with this versatile and delicious herb.

According to writings attributed to Apicius, lovage was considered one of the most valuable food seasonings, second only to pepper, which was worth more than its weight in gold. It grew along the Italian Mediterranean, and due to its popularity in Roman cooking was exported to the corners of the empire.

In pre-Columbian times in North America, lovage was also quite popular and was enjoyed eaten fresh and used as a flavouring for fish. Nowadays it has fallen from grace, grown or collected in the wild by few instead of many. If you are lucky enough to find this delicious wild herb during late summer hikes, save some seeds or dig up a small plant to transplant. You’ll never regret adding lovage to your garden.

Lovage is a member of the parsley family and has white, umbrella-esque flowers that resemble Cow Parsley and Queen Anne’s Lace. It is easy to spot once you are familiar with it, due to its bright, shiny, toothed green leaves, its reddish stalks and its tendency to grow in fairly dense, isolated clumps. The variety that grows along the eastern coast of Canada is called Scotch Lovage — it is similar to Mediterranean lovage and has the same uses in the kitchen.

Lovage grows in grassy, sandy spots along ditches, marshes, and cliff-sides, and is generally always found near the ocean, due to the fact that the seeds float and are spread by the ocean within its habitat range. Walk the coastline between Blackhead and Cape Spear and you will find enough patches of lovage to stock every kitchen in St John’s!

The entire plant is edible; its roots, stalks, leaves, and seeds all have culinary uses.

Lovage was such a popular seasoning in Ancient Rome that it appears in over half of the recipes compiled by Apicius in the book Roman Cookery, written in the 4th century A.D. This cookbook is in the public domain since it is so old (the clickable link will take you to an online version of the entire book); I highly recommend many of the recipes here.

The Romans used spices and sweets in their cooking in different ways than our modern cuisine, so many of the recipes have excellent and unique flavour combinations. The book also includes many excellent recipes for preparing rabbit, which is an important local source of meat here in Newfoundland. Rabbit and lovage is a very tasty combination! Try Apicius’ recipe for roasting chicken with pine nuts, lovage, and chopped dates for a taste profile quite unlike anything typical of modern European cuisine.

Lovage is a perennial and will grow back in the same location each year. The leaves can be harvested from around July onwards and their unique celery/parsley flavouring becomes stronger as the season progresses. The leaves can be eaten straight and make a tasty addition to salads. They can also be prepared as a potherb, or used in place of parsley as a nice garnish for a fancy dinner. Using lovage instead of lettuce on a burger makes for a nice, flavourful burger. We use it in place of celery or parsley leaves in soups and stews, pasta sauces, roasts, and many other things.

Lovage leaves do not keep their flavour very well when you dry them, so the best way to preserve them for off-season use is to place the fresh leaves in a bag and keep them in the freezer. Alternately, you may prefer to domesticate a lovage plant for indoor use year-round. A tea or decoction of lovage leaves was used in the age of exploration by sailors as a measure to prevent or treat scurvy.

Lovage seeds are also edible. Along with the tasty juniper berry they present us with a rare opportunity to forage locally for culinary spices. They also contain aromatic oils that release when the seeds are cooked; the rich aroma they provide has quickly become a favorite around our house.

This aromatic oil can also be extracted from the seeds or roots to make a very pleasant smelling essential oil. Harvest the seeds in September, once they have started to turn brown. The seeds are small, but each stalk head contains hundreds of them, so it is very easy to quickly collect enough to last your kitchen all year long. Use the seeds in place of celery seed or fennel in recipes.

If you have your own patch of lovage, you can also harvest the stalks to use like celery. This process involves piling straw around the base of the plant in the springtime, in order to blanch the shoots as they grow, keeping them nice and tender. The young shoots can also be candied for use in confectionary or eaten as candy. Simply harvest the shoots while they are 10-15 cm tall, and boil them for 10 minutes in a simple sugar syrup.

The Romans enjoyed eating lovage root as a food, but in modern times the root is more commonly used for its medicinal purposes; for example, a cordial or tea made from the root is said to help with upset stomachs or digestive issues. Apicius tells us the root was chewed in a manner similar to how we use chewing tobacco. According to D. C. Watts, in Dictionary of Plant Lore, a tonic of lovage was an effective remedy against scurvy. Due to the presence of furanocoumarins, consuming the root can lead to photosensitivity (sensitivity to bright light), so enjoy the tea before bedtime.

Once you have your very own lovage plant, either from a transplant or from collected seed, it is easy to subdivide the roots in early spring to create more plants. If you’re like us, you might find you enjoy the look of lovage as well as the taste, and use it as an ornamental; it handles thin, sandy soil well, as well as marshy spots, and doesn’t mind salt spray, so you can cultivate lovage on areas of your property that may otherwise be sparse and difficult to colonize.

Spend some time familiarizing yourself with this excellent and overlooked plant, and learning its many uses this summer, and once you have, get out there and share the lovage!

For more information about using lovage in the kitchen or garden, and many other local food-related topics, join our growing food sustainability community on Facebook, Backyard Farming & Homesteading NL. 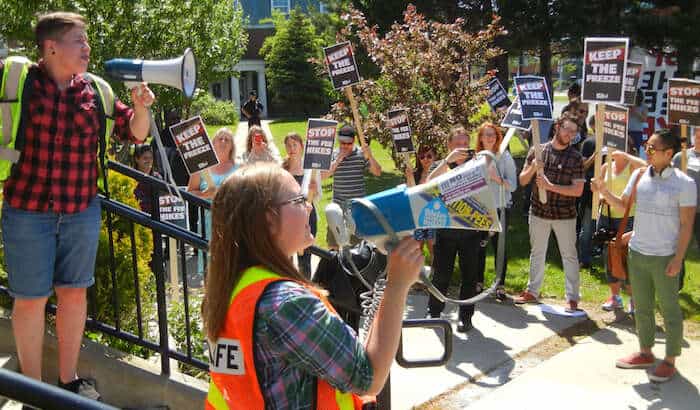 Students, faculty vow to fight MUN fee hikes
In the wake of a vote to raise tuition and residence fees for certain students attending Memorial University, the Canadian Federation of Students, its member…