Protecting our Traditions: the case for backyard animals

When cops come for your backyard chickens, it’s time to rise up and speak out about the importance of sustainable, respectful food-producing practices.

At a house in the small farming community of Conception Bay South it’s business as usual, and the kids will soon be home from school. Unexpectedly, there’s a knock at the door. The woman inside answers, and to her great shock there stands a bylaw enforcement officer flanked by two police officers from the Royal Newfoundland Constabulary. The bylaw officer explains the reason for the visit. They are there for Brownie, the family’s pet chicken.

While armed police officers and a bylaw enforcement officer showing up to issue a removal order for a single hen sounds like something out of some dystopian, totalitarian future, it is in fact what happened on Feb. 26 to CBS resident Alicia Penney Harnum and her husband and Fred.

Conception Bay South, like all towns in Newfoundland, has a proud tradition rooted in hunting, fishing, gardening — and, yes, keeping a few backyard animals for household use, such as producing eggs or milk. Many people strive to pass these skills and traditions—this connection to where our food comes from—down to their children.

Now, residents like this CBS family are being threatened with fines and even jail time for the crime of producing wholesome food for their dinner table. But how did it come to this?

In the not-too-distant past, goats, chickens and other small domesticated animals (that weren’t cats or dogs) abounded in people’s back yards. To this day, ducks can be found in ponds, ditches and even large puddles throughout the province and its urban and suburban areas, with nary a bylaw to restrict them or round them up. But keep a duck or hen in your yard for eggs, and you risk incurring the wrath of bylaw enforcement in some of these small towns, even while the ducks across the street quack happily away.

Photos in Memorial University’s archives show a leashed cow being led down Parade Street in St. John’s. Children went for rides downtown on goat-pulled wagons. And goats roamed the South Side Hills. There were even horses on Waterford Bridge Road until just a few years ago. The horse water fountain still stands in Bowring Park, freshly painted and frozen in time.

Ted Russell’s The Chronicles of Uncle Mose tells of the exploits of a majestic buck goat named King David in the fictional outport Pigeon Inlet, and characters such as King David the Goat and Old Man Dillon’s goat were popularized by Joan Morrissey’s song The Mobile Goat. These are integral parts of Newfoundland culture and history.

Every time we walk our two leash-trained goats, Goldie and Maple, down the streets of St. John’s, I hear “Only in Newfoundland would you see that” at least a few times. Faces light up as people see living pieces of Newfoundland culture and tradition walking up to greet them. But now these simple, small-scale food producing traditions are being outlawed. Not by St John’s, which has a surprisingly progressive set of animal control bylaws, but in nearby little towns that appear to be going through a process of gentrification, and which seem suddenly ashamed of their recent rural past.

Last Friday’s enforcement visit to the CBS couple’s home made the news, the story turning up in provincial and national media outlets. The request to keep chickens was discussed at council a few days later, and ultimately denied. According to Alicia, the validity of the complaint that led to the visit was never determined, and no recourse or remedial action was considered to solve the problem and accommodate both the chicken keeper and the complainant. Simply put: the chicken had to go, or face the consequences.

This flies in the face of words spoken by CBS Mayor Steve Tessier, who said he “love[s] the idea of being able to raise a couple of chickens in your backyard and grow some vegetables.”

A groundswell of community support followed. Seventy-nine percent of over 2,000 respondents to VOCM’s Question of the Day agreed that small municipalities need to change their approach to backyard farming and the keeping of small farm animals. The pressure is on — but will our town councilors and mayors listen?

CBS is not alone in its crackdown on dual-purpose backyard pets. A similar event occurred in Stephenville in 2013, and a teenage boy living in the Goulds on an entire acre of land was initially told to get rid of his 13 chickens. The City later amended this decision to allow for him to keep three of them.

The reason given by the municipalities engaging in these crackdowns is that, as soon as you have even a single chicken in your backyard, you no longer have a residence, but a farm — one that needs to comply with agricultural legislation and zoning requirements.

Farms are businesses that sell their product, whereas folks like Alicia Penney Harnum and her family keep a small number of animals as dual-purpose ‘productive pets’. As someone once told me, ‘Pets have names, livestock have ID numbers’.

On our little homestead, every animal has a name and its personality traits are known. They are treated as individual pets. Fully-fledged farms can run the gamut from egg operations, to feed lots of masses of cattle, to fields sown with thousands of cabbages. But nobody considers a handful of cabbages, grown in a backyard to feed the residents who live there, to be a ‘farm’ requiring proper agricultural zoning. So, why is there a double standard with chickens? Nuisance animals like roosters, who cock-a-doodle-do every morning, can and should be regulated and kept to rural areas — but due to the potential noise involved in keeping a rooster, this is a separate issue entirely.

Surprisingly, it is our urban centres that lead the way when it comes to progressive, respectful rules about animal keeping. St John’s Animal Control Bylaw #1514 does not follow ‘breed specific legislation’, but instead handles all animal complaints the same way: based on the validity of the complaint, and whether the keeper has followed all the regulations for shelter, care, noise, and smell. A visit from a bylaw enforcement officer in St John’s, instead of coming with a ban, leads to constructive conversations about how to solve the issue and remediate what may have led to a complaint, amicably and fairly.

Up to three animals can be kept in a backyard enclosure, and larger yards mean more room for enclosures. Nobody is using these bylaws to start an urban chicken factory in their yard. So an attached downtown row house with a small yard may be restricted to three chickens, but a half acre lot on the fringes of the city could have more. This is a very reasonable and fair approach that allows things to scale accordingly, based on property size and density.

[L]little towns that appear to be going through a process of gentrification…seem suddenly ashamed of their recent rural past.

Urban centres across Canada now allow for backyard chickens, as interest in sustainability has soared and knowing where our food comes from has become a priority for many Canadians. Vancouver, Victoria, Kelowna, Guelph, Brampton, Surrey, and Montreal, all fairly major cities with populations ranging from 78,000 to over 1.6 million, allow backyard chickens and other sustainability initiatives. Vancouver even has an urban roof top beekeeping project, and allows its urban residents to keep bees.

The idea that urbanization and gentrification automatically precludes chicken keeping or other small backyard animal keeping is a fallacy.

One concern that opponents of backyard chickens are quick to bring up is the possibility of disease. Scarred by battery-cage chicken rearing and its inherent risks, some assume that the same risks of salmonella and avian flu that are present in giant factory farm operations will carry over into a backyard with a handful of chickens. Assuming proper hygienic practices are followed, the risk of disease outbreak from backyard chickens is actually much lower.

“When it comes to bird flu, diverse small-scale poultry farming is the solution, not the problem,” non-profit organization GRAIN concludes in a 2006 report.

In addition, fresh, free range eggs from your backyard are more nutritious than eggs bought at the grocery store; they contain more vitamin A, more omega-3 fatty acids, and three to six times as much vitamin D, compared to factory farm eggs. The fact that birds kept in backyards will live longer, happier lives than their factory counterparts is an added bonus.

In previous generations, backyard produce from gardens, chickens, and goats played a very important role in filling gaps in the food supply, especially during wartime and periods of economic upheaval and depression. Called ‘Liberty Gardens’ during the First World War, ‘Depression relief gardens’ in the 1930s, and ‘Victory Gardens’ during World War II, these programs to encourage small scale food production were trumpeted as every citizen’s patriotic duty, proof that backyard gardening for food sustainability has long been a part of North American culture.

Newfoundland imports 90 percent of its food supply, and according to Food First NL we are one or two bad snow or windstorms away from empty grocery store shelves, something many of us have witnessed first-hand in recent years following heavy storms.

Now is the time to speak up in favour of backyard food.

Couple this with our province’s extremely dire financial outlook, running a $1.96 billion dollar deficit in 2015, and backyard gardening and animal-keeping goes from a quaint hobby to an economic necessity for many. With a population of 526,000, the $1.96 billion dollar deficit is almost $9,000 per household of 2.2 people, for 2015 alone. Unless things change, and change quickly, what is now a bit of a trend towards backyard homesteading will become full-blown ‘depression relief’ gardens in the years to come.

Our small municipalities must become more accommodating to backyard food production in the years ahead, and I call on them to adopt a fair, reasonable policy similar to bylaw #1514 in St John’s, which focuses on the reasons for the complaint and its validity, rather than the species of animal involved. ‘Discretionary land use’ approved as council sees fit, lacks transparency and creates the potential for preferential or targeted treatment of citizens. Rules are best when they are fair and equally applied.

If you’re a citizen who wants to know where your food comes from, and you want to have a say in whether those practices should be encouraged or outlawed, now is the time to speak up in favour of backyard food. Otherwise, the day may come when we need local, small scale food more than ever, only to find it outlawed by a NIMBY (not in my backyard!) town council with too much time on its hands.

We need local food, in all its forms, now more than ever.

Join our growing online community—Backyard Farming & Homesteading NL on Facebook—for more information on keeping small dual-purpose animals as part of your family’s food security initiative.  The group has become an important resource, bringing together experts and hobbyists alike as we learn new skills and bring about more local food options and sustainability for the people of Newfoundland & Labrador. 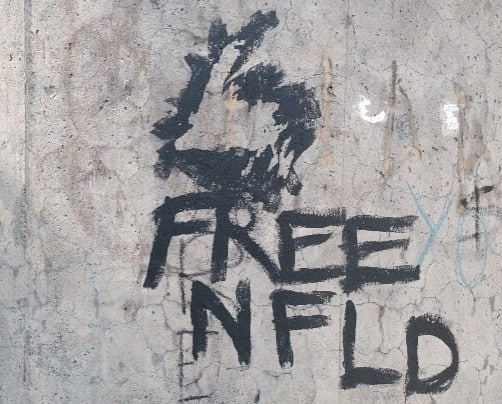 Why the nationalism debate needs to stop being dominated by white men
A recent panel on Newfoundland nationalism at MUN reveals the stale nature of the debate. 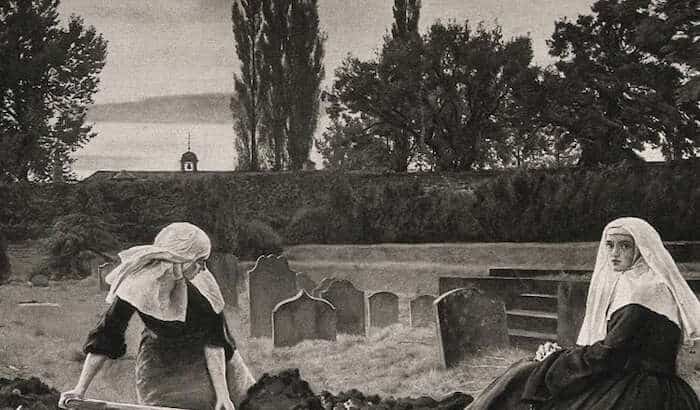 Anne Carson, Antigone, and the State of Exception
Anne Carson's devastating Antigonick shows that Sophocles is our contemporary.