The apples of my eye

Fall is a forager’s delight, with apples ripe for the picking throughout the province — scattered near trails, alongside rivers, in schoolyards and parking lots. You can stockpile them, but then what?

Foraging is often hard work. You can spend all afternoon bent over, busily collecting whatever ripe fruit, plants and seeds are ripe at the time, and come back with a small bucket of bakeapples, mint, or snowberries to show for your efforts. Often, these containers will only weigh a few pounds, a seemingly small reward for your work. That is, until you use them and wish you’d picked more! But apple season, wonderful apple season, is when foraging really feels a little bit like gaming the food system.

Wild apples are wonderful. While your reward for finding a raspberry patch is often a pound of raspberries, stumbling across a wild apple tree can yield over a hundred pounds of fruit. Find a few of these, and you’ll be busy all throughout the fall, turning your apples into all sorts of homestead goodies.

Our ‘branded’ supermarket apples come with fancy names: Gala, McIntosh and Granny Smith, to name a few. These varietals keep their properties, such as sweetness, flavour or colour, by cloning, grafting or hybridization. Apples grown from seed tend to lose their distinct characteristics and seedlings often revert to the lowly wild apple, malus pumila. These medium-sized, tasty green apples with their reddish patches are often called ‘crabapples’ here in Newfoundland, sometimes leading to the conclusion that they are sour or inedible like their cultivated cousin, the ornamental crabapple. These ornamentals are often the size of supermarket cherries, and turn a warm yellow or bright red when they ripen, usually in late fall. One bite of a sour ornamental crabapple and you will quickly conclude on your own that they are inedible!

Ornamental crabapples can be turned in to a tasty sour cider, and they make delicious jelly, but they aren’t generally eaten as fruit. The small yield from ornamental crabapple trees is also quite small. If the apples on the apple tree you’re eyeing never get any bigger than a ping pong ball, it may be an ornamental crabapple. But, especially if it hasn’t been planted intentionally in a garden, you are probably looking at a wild apple tree, so pick away.

Keeping in mind that most of the apple trees you find will be neither cultivars nor ornamentals, the next key is to know where to look for them. To do this, just walk around, pretending you have just finished an apple and have a core to toss somewhere. Where would you throw it? What you are looking for is someone who may have done just that, a decade or more in the past.

The apple cores of yesteryear are today’s wild apple trees! For that same reason, I always throw a few apples from each tree we pick somewhere nearby – hopefully resulting in a new generation of apple trees for tomorrow’s foragers. Apple cores are completely biodegradable, so tossing an apple core is not littering — it is seed planting! However, if you live in Bay Roberts, you may want to be cautious. Apparently, an extremely zealous town councillor went after one of his colleagues from nearby Cupids for tossing an apple core on the ground, claiming he would get the RCMP to charge the councillor for littering.

No charges were laid.

This type of antiquated thinking needs to be challenged; planting fruit trees for future generations should be applauded, even if it is done accidentally or without intent. The apple trees that produce the apples we enjoy all year round today are often the products of casual littering of biodegradable apple cores a generation ago.

Almost all of the apple trees we pick from are in surprisingly obvious spots: near a schoolyard, along a river, an arm’s throw away from the road into a grassy field, next to a hiking trail, and so on. Look for apple trees in the springtime when they blossom; they will stand out from a great distance with their beautiful pink flowers. We can sit at Atlantic Place on Water Street in St John’s in the springtime and spot a few dozen apple trees all the way across the harbour, up in the Southside Hills!

They call it ‘fall’ for a reason

Apples ripen in early to mid-fall and are at their sweetest if you pick them right around the time we get our first frost. Here in Newfoundland, that means our apples are usually ripe right around the time we get our late September hurricanes. This is a blessing in disguise. Our favorite apple tree—one of many located along a hiking trail in the Southside Hills—is a real beauty. Standing over 20 feet tall, it produces buckets and buckets of apples. The trouble is – how do you get them out of the tree? Ten per cent of the apples can be reached by hand — enough for a pie, perhaps.

In September 2010, as we stood contemplating this problem, we took the most obvious option. My wife Lisa, who is an excellent climber, zipped up the tree and tossed apples down to me. This worked well enough — we lugged home as many apples as we could carry, determined to come back for more. We sat at home that night, planning logistics. Could we bring a ladder? Could we try building one of those broom handle/pop bottle picking devices people post on social media?

But Hurricane Igor solved our problem for us. Before we got out for more apples, the storm hit. We wondered how the apple trees had fared during the extremely high winds, so once the flooding on Southside Road subsided we headed out to visit our apple patch. Luckily, the trees were fine, but their bounty of apples had been brought down by the high winds. There, at our feet under the tree, over 100 pounds of apples sat in the grass. Easy picking if ever I’ve seen it! Our apple-picking season now never truly begins until a strong wind storm comes in and does some of the legwork for us.

The year Hurricane Igor hit, we raced around in the days after the storm, trying to save the fallen apples brought down by the winds. We succeeded, perhaps a little too well. Our kitchen was now home to buckets of apples, baskets of apples, Sobeys bags full of apples — even apples mounded high on our table! So, in short order, we found ourselves beset by a problem: What the heck do you do with 300 pounds of apples?

Fortunately, there is an abundance of goods you can produce from your apples. Culinary delights spring to mind, first and foremost, and many of our apples were made into pies and other baked goods. Apple sauceis easy to make at home without any special equipment. Add in some partridgeberries or late-season blueberries to your applesauce for a delicious treat.

We also dehydrate apple slices (aka apple chips) to eat as a fruit snack. We don’t have a dehydrator, but you don’t need one since homemade apple chips are easy to make by setting your oven to its lowest temperature. Add a little bit of cinnamon and sugar to the apple slices before dehydrating them, and you’ll be enjoying this delicious treat all year long. Apple fruit leather is also easy to make if you have a food processor. Simply grind up the apples, sweeten them to your taste, and spread the mash out on a baking tray — about 1cm thick. Dry in the oven at its lowest setting. The fruit leather can then be cut up or rolled and stored almost indefinitely.

If you have, or can make, a juice press, another bounty awaits — fresh-pressed apple cider!

We ‘cold-press’ our fresh, non-alcoholic apple cider, as I find it is far tastier. Cold-pressing apples for hard cider also has the added benefit of coming pre-equipped with yeast enzymes, which are present in the skins (cooking or boiling destroys these enzymes). This is very useful for making hard (alcoholic) cider, as you can simply leave a batch of fresh, cold-pressed apple cider in a bucket, with a cloth over top, and it turns into hard cider all on its own — no fancy brewing yeasts required!

The bucket will fizz and ferment. Then, after a week of fermentation, transfer the cider to a container with a one-way airlock (so air can escape as fermentation continues, but not get in to spoil your cider). It can be left for up to six months before bottling for long-term storage. If you wish to keep your non-alcoholic cider bottled for year-round use, ensure it is properly canned in a hot water bath for sterilization. One way to improve the flavour of your homemade cider is to add a small percentage (around 10 per cent) of small, ornamental crabapples to your cider.

Another magical product you can make from your hoard of apples is the ever-versatile apple cider vinegar — and the process is very easy.

Simply take some alcoholic apple cider once it’s finished bubbling, and add a vinegar ‘mother’ to the bucket. Apple cider vinegar mothers will consume the alcohol and turn it into acetic acid. The mixture will require air at this point, so put it in a bucket and put a cloth over top to keep vinegar flies from converging on it.

To get a ‘mother’ starter, you can leave the bucket exposed to air for several days, eventually a natural mother will start and begin the conversion process all on its own. But a much faster way to do this is to add a mother from a bottle of natural, active apple cider vinegar, such as Bragg’s or Filsinger’s (or your own, from previous years).

Around our homestead, apples also provide a tasty dietary supplement for our animals. Our ducks enjoy grated apple in their food or water, gobbling up every last piece. Our rabbits and goats eat as many they can get. Apple peels from our processing are quickly devoured, ensuring there is very little waste.

Uses for foraged apples are many, and limited only by your own creativity: apple chutney, apple jelly, apple & walnut salad, roast turkey stuffed with apples, apple salsa — the list goes on. So get out there this fall, pick more apples than you know what to do with, and challenge your creativity!

You’ll be pleasantly surprised, and may even find yourself looking forward of that first hurricane of September.

Racism alive and well in St. John’s
"I'm going on my third year living in St. John's, and I've never been so hesitant to let people I meet know where and who… 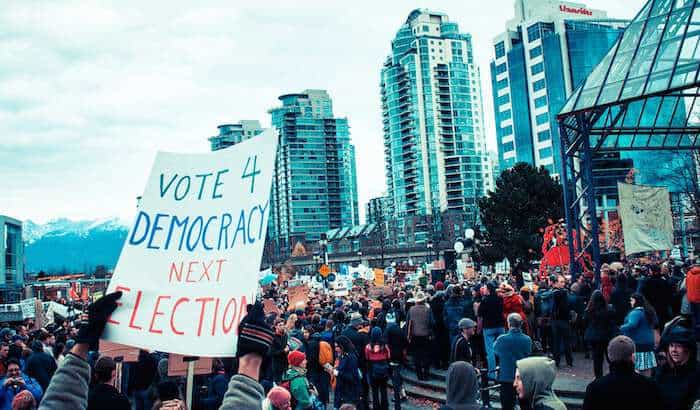 Don’t talk down to us
'Professionals' are killing democracy.