Taking a closer look at our vision of (and in) space

Chris Hadfield, soon-to-be commander of the International Space Station, strums the final chords of I.S.S. (Is Somebody Singing?) and releases his six-string guitar, letting it spin gently and silently in microgravity. The song, written by Hadfield and Ed Robertson of the Barenaked Ladies, and performed with the Wexford Gleeks, is a partnership project with Music Monday, CBC Music and the Canadian Space Agency. Music Monday coalition director Holly Nimmons is calling on all Canadians to learn the song and “fill the skies with music” on May 6, with Hadfield beaming down via satellite as a symbol of national connection and international cooperation. Space and art are the main ingredients holding together this inspirational and feel-good event.

It’s an event reminiscent of Guy Laliberté’s Poetic Social Mission of 2009, when the Cirque du Soleil founder became a space ringmaster for 11 days, raising money and consciousness for water usage on earth. Popular and easily accessible cultural and humanitarian events such as these make a whole lot of emotional sense against the backdrop of the earth. In fact, it is this very big shift in perspective when looking back at the earth, known as the Overview Effect, which Hadfield and Robertson allude to in their song. Astronauts who experience this effect recognize that the national and political boundaries of earth become blurred from this wider vantage point. What is not mentioned, however, is that Hadfield, due to his extended time in microgravity, may need to deal with another very big shift in perspective, one where the earth itself may become a little too blurry.

The unseen risks of microgravity

In October 2011, a NASA-sponsored medical science study team headed by Dr. Thomas H. Mader published a report in the journal of the American Academy of Ophthalmology bringing to light the issue of vision problems experienced by astronauts. The report focuses on the study of seven astronauts, all over the age of 50, who spent at least 6 continuous months in space. They all experienced vision problems which began after about six weeks in microgravity, and which continued to varying degrees when they returned to earth.  Although a decrease in vision has been a known issue for decades, and early astronauts were outfitted with “space anticipation glasses”, this newer research has revealed information that points to possible permanent vision damage due to elevated intercranial pressure (ICP).

At the International Space Medicine Summit 2012, an international panel of experts focused in on this hot topic of Visual Impairment and Intracranial Pressure. The exact reasons for these issues, which include flattening of the eyeball, folds in the tissue behind the retina, and excess fluid around the optic nerve, are under debate, but research so far points to ICP as a possible culprit. Dr. Larry Kramer of the University of Texas Health Science Center outlined that in a study of 27 astronauts, 15-50% of them displayed probable ICP-related symptoms that could potentially lead to vision impairment as serious as blindness. Also of note is that the definition of “long term flight duration” used in the study was not six months, but a mere 30 days of cumulative exposure to microgravity.

This complex response of the human eye to microgravity is just one of a number of challenges faced by humans in space. The freefall state that causes Chris Hadfield’s guitar pick to float also causes spinal fluid to increase around his optic nerve, blood to flow away from his heart, and bone and muscle deterioration to occur. In addition, increased exposure to cosmic and solar radiation, space sickness, possible fainting during re-entry, confused circadian rhythms due to 90-minute days, exposure to toxins, and the psychological stress of living in space and working in a high-risk extreme environment are all factors that astronauts must accept. It’s no wonder the man brought his guitar.

The injection of artistic activity into crew schedules and human-centred design in spacecraft can go a long way to aiding the well-being of humans in space, and will be a vital consideration for future longer-term missions to Mars. However, artists also play other roles in addressing the problems faced by space life sciences.

During a panel on education at the International Space Medicine Summit, Professor David Alexander stressed the importance of taking a multidisciplinary approach to problem solving. Partnering across disciplines is the keystone of the STEM to STEAM education initiative, which believes that adding “Arts” to “Science, Technology, Engineering and Math” will improve learning. Creative thinking is vital to problem solving, and with the host of problems that space life science is currently facing, educating future space medical scientists to be outstanding multidisciplinary creative thinkers seems like a very wise step.

Also speaking at the education panel, Astronaut Alvin Drew took a riskier view, urging the space medicine community to commit “premeditated acts of social arson”. In other words, ignite someone’s imagination. That’s exactly the kind of thinking involved in the creation and promotion of the Tricorder X-Prize, a global competition to develop a medical diagnosis device inspired by the Star Trek Tricorder. Who better, then, to promote the idea and stir up public interest than the five captains of the fictional starships?

Art is woven into every step of the journey to space. It adds creativity to problem-solving and is the soothing counterpart to the high risk activity it inspires. The astronauts who are lucky enough to experience the vision of an earth without borders know very well the risks and stresses that their human bodies will encounter. But if you’re Chris Hadfield, singing with a nation and bantering on Twitter with William Shatner might make the risk a little easier to endure.

The Nutrition Series, Part I: The Bee’s Knees
Taking a closer look 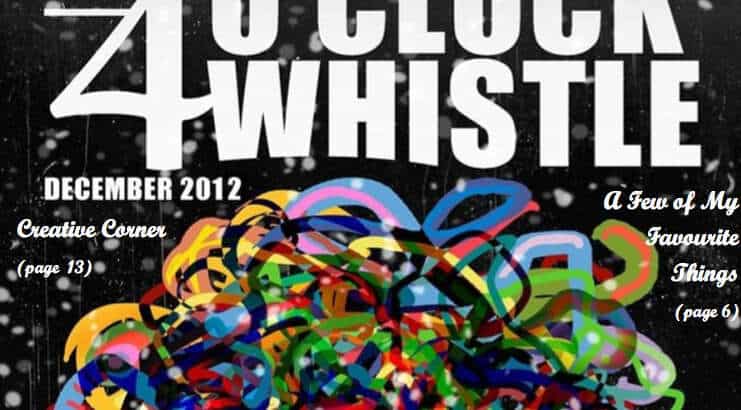 Grassroots media: a new approach
A chat with three founders of The 4 O'Clock Whistle, the grassroots publication that emerged from Occupy Corner Brook.