An ounce of prevention is worth a pound of cure

“Not so,” says the Canada Revenue Agency

Benjamin Franklin is credited with the phrase, “An ounce of prevention is worth a pound of cure”.  This statement has survived over two hundred years because it makes sense, common sense.  But then up pops the Canada Revenue Agency like Monty Python’s Spanish Inquisition to inform us all that preventing poverty cannot be the aim of Oxfam Canada, one of the most trusted and respected aid agencies in the world.

What kind of Orwellian doublespeak is this? According to Canada’s charity overseers it’s OK to help alleviate poverty but for Oxfam to maintain its not-for-profit status no longer can it aim to “prevent” poverty. This story would have fit so well into Robin Whitaker’s recent Gadfly column “The Trouble with Charity”.

To declare the prevention of poverty invalid as a charitable act is farcical, most worthy of a Rick Mercer Rant or a 22 Minutes skit. But it does have serious ramifications.

How does one distinguish poverty alleviation from poverty prevention? Food banks, for instance, are designed to alleviate hunger. They do nothing to prevent it. According to Revenue Canada food banks provide a valid charitable service. However, anyone lobbying for lower drug costs, increased financial supports or advocating for affordable housing are not worthy of charitable status. Yet even the provincial government has recognized that the best way to reduce poverty is via a Poverty Reduction Strategy that focuses on supports to both alleviate and prevent poverty. It is a development truism that to eradicate poverty one needs to focus on its causes.

The same is true globally. Many millions find themselves desperately poor due to a particular natural emergency such as an earthquake (e.g. Haiti) or a typhoon (e.g. The Philippines). Other explanations why so many people find themselves in poverty are more political in nature — for example, the Gaza bombardment or the refugee exodus of Syria.

Oxfam has a strong record in responding to such disasters in providing safe water and sanitation to tens of thousands of people, women, men and children in need. On average Oxfam responds to 25 emergency crises at a time worldwide. It is from direct experience of responding to and assisting desperately poor people that Oxfam feels duty-bound to raise its voice and to offer solutions that will help prevent future crises.

Currently Oxfam staff who live and work in Gaza are distributing emergency food vouchers and providing safe water to nearly 50,000 people who have fled their homes and who are sheltering in schools, churches, mosques and hospitals. Oxfam also operates a mobile healthcare clinic in Gaza.
This day to day experience in Gaza has compelled Oxfam to call for a lasting peace and an end to the Israeli blockade: “The international community needs to redouble efforts to achieve a just and lasting peace that brings security and development to all Palestinians and Israelis. Israel must end the blockade on Gaza, which is collectively punishing an entire civilian population.”

For over 30 years I worked as an educator and campaigner for Oxfam Canada. During my tenure I always believed that it was Oxfam’s commitment to addressing the causes of poverty that distinguished it from those charities whose financial well-being was focused on exploiting the images of the desperately poor. It was an Oxfam principle that people living in poverty be shown in a dignified way. In seeking donations Oxfam avoided images that elicited pity, but instead Oxfam would focus on those images and stories that would appeal to a sense of solidarity.

In 2005 as G8 leaders prepared to meet in Edinburgh, Scotland Oxfam partnered in a new campaign called Make Poverty History, the goal of which was to persuade world leaders to take serious action against global poverty through improved aid, fairer trade rules and putting an end to the debt that was impoverishing generation after generation, denying them access to schools and health clinics.

The campaign was launched by the recently retired president of South Africa, Nelson Mandela. In his own inimitable way Mandela reminded us that charity would never end poverty. “Overcoming poverty is not a gesture of charity. It is an act of justice. It is the protection of a fundamental human right, the right to dignity and a decent life. While poverty persists, there is no true freedom … Like Slavery and Apartheid, poverty is not natural. It is man-made and it can be overcome and eradicated by the actions of human beings.”

For Mandela poverty was a social crime and as such we needed to speak out, stand up and take action against this very injustice. Such thinking can also be found in the writing of Paulo Friere, a Brazilian educator who worked closely with the poor of his country. Friere saw a distinction between false and true generosity.

“True generosity consists precisely in fighting to destroy the causes which nourish false charity. False charity constrains the fearful and subdued, the “rejects of life,” to extend their trembling hands. True generosity lies in striving so that these hands—whether of individuals or entire peoples—need be extended less and less in supplication, so that more and more they become human hands which work and, working, transform the world.”

It is such thinking that is at the heart of Oxfam’s humanitarian, development and campaigning efforts. Oxfam is a rights-based organization that is committed to the eradication of poverty. While I no longer work for Oxfam I feel confident in saying that Oxfam will continue its humanitarian work of aiding people who find themselves in all forms of distress. Oxfam will continue to support partners who are fighting to have their human rights recognized and enforced; women owning land, children attending school, workers treated fairly are all part of this mix.

Oxfam will also continue to join with others in demanding that world leaders own up to their obligations on such issues as aid, climate change and respect for human rights. And Oxfam will continue to campaign and advocate on issues such as the Robin Hood Tax, a small financial tax, as a source of funds that could go along to helping alleviate and prevent poverty.

As for the Canada Revenue Agency, it will continue to administer the tax laws for Canada. It is their political masters who need to catch up with the thinking of Benjamin Franklin and accept that an ounce of prevention is worth more than a pound of cure. 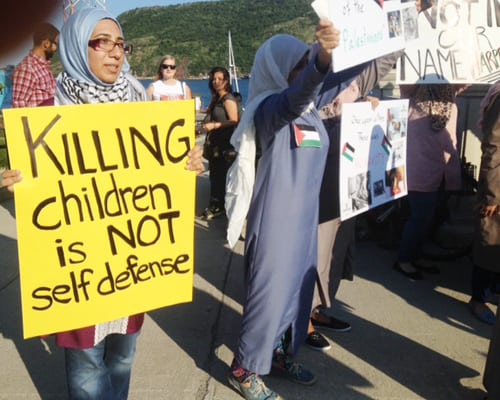 St. John’s residents to remember child victims of Israel’s massacre in Gaza at Thursday vigil
As Israel intensifies its attacks on Gaza, killing more civilians each day, people worldwide are beginning to see through the propaganda and Western media bias