Austerity an easy out for elites

Sneering elites believe the public is ignorant and in search of easy answers, but we see the broad strokes of immorality and unfairness.

Resistance to the Liberals’ austerity budget has been mounting, and if you’ve been tuned into the media around it (both social and traditional), you’ve likely been noting a lot of sneering condescension from academics and journalists on the resistance to the budget. Treating the public as if they’re naive morons, unaware of the hard choices to be made.

But the reality is that people aren’t ignorant to the state of our economy, and as uninformed on the details as your average person might be due to the rigors of caring for self and family in a competitive, ruthless market, they are aware that the burden is distributed unevenly. That’s nothing new with this budget, of course, but becomes all the more pronounced as you ask the working poor to give more; their life is full of constant reminders that taxes on the wealthy have been low and lowering for decades. While this island is possessed of wealthy people who are able to do absurd things such as buy whole towns for themselves, those on the cusp of poverty are asked to fork over more cash, and those in poverty are told to deal with fewer services.

It is abundantly clear to them that the wealthy who profit off the back of minimum and low-wage and foreign workers—such as our Finance Minister Cathy Bennett—are deciding how the burden of paying the public debt should be laid. Dwight Ball insisted under opposition attack that some earners are benefiting under the new budget versus the old.

These reassurances only highlight the reality gap between rich and poor.

While there are no shortage of people willing to shove misleading figures on taxes for the wealthy in your face to say they already pay more than their fair share, not the least of them our illustrious premier, the fact that a few hundred dollars means nothing to them but everything to the poorest among us speaks louder. For the richest amongst us, the levy amounts to a minor nuisance, a slight tick against their financial scorekeeping that shall in no way influence how they live.

And greater than that, they have trouble understanding how it could be anything more than mere nuisance for any of us.

Journalists are considered a bulwark against government corruption or malpractice, but the honest truth is that mainstream journalists who cover politicians are often imbedded among the rich and powerful on a daily basis. They come to see the world through a sympathetic lens to those elites, and they get intimate knowledge of the way things work, and why they work that way. Very rarely are they pushed to see how things could be done differently, other than a few minor tweaks, generally towards their preferred Liberal or Conservative Party rule.

People know big changes are needed — big changes that have to start at the top, as that is the only moral or rational option.

One hard fact that should stand as a slap in the face to all those sneering is that 40 percent of the current deficit is due directly to the tax cuts of the last government, while in the face of this massive debt brought on by years of under taxation we face necessary hikes in health care costs (as the federal Liberals offload costs onto our province). Since the rise of neoliberalism, taxes on the wealthiest have plummeted dramatically. Beginning with the massive restructuring of tax brackets in the early 70s and 80s under the excuse of simplification, we have endured decades of cuts to life-saving social programs nationally that the province has to step in on, just to shore up the ever increasing (and often untaxed) wealth of the elites.

So is your average person naively unaware of the tough choices that need to be made? Hardly. If anything, they are astounded by the easy answers sought by people like Ball and Bennett, who think that by making slight tweaks across the board our situation will be resolved. That by demanding all branches of provincial government, regardless of their importance to our lives, slash spending by a third, we shall get through this.

No, people know big changes are needed — big changes that have to start at the top, as that is the only moral or rational option. That leadership begins by setting an example, by taking a greater burden upon your shoulders so that others are inspired. They are appalled that no attempt to do that was even made before campaign promises were discarded and the vulnerable among us were told in no uncertain terms to suck it up.

Oh, they cut the salaries of cabinet minister bonus pay by 10 percent, sure. However, all of our MHAs have been overpaid for years compared to other Atlantic provinces, making 11 percent more than Nova Scotia and 41 percent more than PEI in 2010. A bold statement that lacks lustre or value.

More importantly, not a person among us truly thinks that Bennett’s minimum and low-wage employing McDonald’s restaurants, her businesses contracting to Nalcor, or Ball’s private old age homes are going to be hurting for profit under these changes. None of us are so blind. For while the sneering elites tell us we just don’t get the intricacies, we can tell them they’re missing the forest for the trees. We could tax the highest bracket far more (perhaps the 80 percent it once was during more prosperous times or the 91 percent that richest American’s once paid), and it wouldn’t eliminate their secure lives, their expensive vacations, their rewards for “success”. It certainly wouldn’t put them at fear of destitution and homelessness as many less fortunates face. And this is an emergency we’re constantly reminded, hard times call for hard choices, right? At the very least we could match Quebec’s top tax bracket rate of 25 percent.

In a time of crisis such as this, there is a moral and rational imperative to act in the public’s interest.

And if you’re dead set on a levy, how about a one-time levy on the biggest earners of the oil boom period? Recoup some of the lost billions from those who reaped the most of it?

And to the charming Peter Cowan, I must respectfully disagree on the role of our Members of the House of Assembly. When we ask our representatives in government to step up and reject the budget, we know that’s not how things are usually done. We don’t treat this as a usual circumstance. In a time of crisis such as this, there is a moral and rational imperative to act in the public’s interest. If it means our MHAs bravely sacrifice their security and their party support, then we ask them to do that for us. We elected them to be bold in our defense. We voted under a social contract that their promises would be upheld with all reasonable attempts to be true to them. We voted for who spoke best to our interests. Now we ask them to honour that.

There is no moral right to ask the working poor for more sacrifices while this island is brimming with wealthy people who sacrifice relatively nothing. We see that, and we see the lazy, self-serving answers on offer, and we reject them. 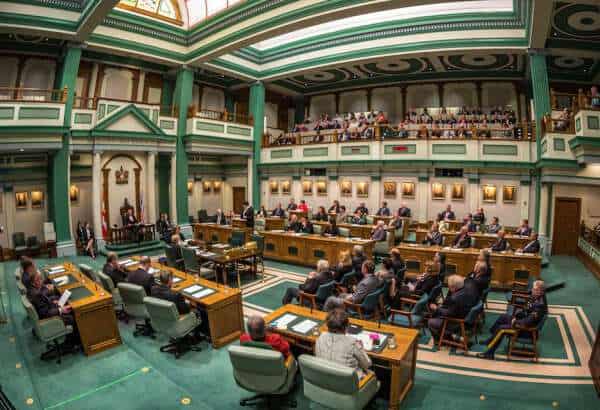 Breaking the cycle of exploitation
Even when times are bad, capitalist states pursue policies that benefit capitalist profit.