Claude Elliott is no hero of mine

The success of ‘Come From Away’ cannot invisibilize the outgoing Gander mayor’s refusal to embrace the rights given to LGBT+ Canadians.

In the early 2000s powerful federal politicians were voicing their support for marriage equality and the Vatican was angry about it. Allison Dunfield reported for The Globe and Mail that the Vatican had created guidelines “for Bishops and Roman Catholic politicians regarding same-sex marriages […] warning lawmakers they must clearly express their opposition on the practice.”

Then Prime Minister Jean Chrétien and his heir apparent Paul Martin — both Catholics — spoke openly about their intentions to support legalizing same-sex marriages in Canada.

In December 2004 Newfoundland and Labrador issued its first same-sex marriage licenses. John Efford, the member of parliament for Avalon, stated that when the Liberals put the issue to a vote in the New Year that it ought to be a free vote for all members of parliament, including cabinet, “just like capital punishment was.” Efford had consulted with provincial Church leaders of the day and opposed same-sex marriage in 2003. Just a day prior to Efford calling for a free vote on the issue, the CBC reported Pastor Gordon Young of St. John’s, when discussing the prospect of marriage equality, proclaimed Canada was “approaching the apex of moral depravity.”

In June of 2004 the House of Commons passed the Civil Marriage Act, which received royal assent the following year. Paul Martin had become prime minister by then and found himself defending his support of the Act. In response to Vatican officials considering the denial of communion to politicians who passed laws which contradicted religious doctrine, Martin declared, “I am a practicing Catholic […] but I am also a legislator, and I believe in the separation of church and state.”

Some nine years later I was fortunate to be elected to the council of Bell Island’s incorporated municipality, the Town of Wabana, and represented the town at annual Municipalities Newfoundland and Labrador symposiums alongside hundreds of other municipal officials from across the province. At 19, I stuck out like a sore thumb in a sector dominated by middle-aged and senior citizens — and I was gay. I felt, surely a decade after Canada’s historic passing of marriage equality, I needn’t worry about my contemporary colleagues holding oppositional views to the rights of LGBT+ folks.

At municipal symposiums I was surrounded by some of Newfoundland and Labrador’s political giants. Randy Simms, Dennis O’Keefe, presidents of Municipalities Newfoundland and Labrador like Churence Rogers and Karen Oldford, but also mainstays like my own outspoken mayor, Gary Gosine. At varying times former premiers like Clyde Wells, Kathy Dunderdale, Paul Davis, and current Premier Dwight Ball all addressed our cohort of municipal politicians, gaining, based on the political tides of the day, bitter applause or roaring cheers.

But none held the crowd like Mayor Claude Elliott of Gander. A vibrant gentleman with an infectious laugh and a knack for storytelling, when he addressed the crowd of more than 500 mayors and councillors, it was clear my colleagues were enamoured with Mayor Elliott. I was too. I had never laughed or thought so much at meetings about municipal services than when Mayor Elliott told a story.

Eager to learn from the experiences of my fellow municipal officials, I researched Mayor Elliott’s track record. Two events underpinned most of the coverage I could find: Gander’s renowned efforts to welcome thousands of stranded Americans during 9/11, and his reported refusal in the wake of Canadian same-sex marriage legalization to officiate same-sex marriages.

At that contentious and fragile time when marginalized citizens gained access to new rights, influential community leaders like Mayor Claude Elliott, as well as then-Mayor of Botwood Jerry Dean—currently a Liberal MHA for Exploits—decided to join the chorus of officials opposing same-sex marriage.

I was dismayed. I had rushed to shake his hand at the first opportunity when I was in the crowd for his address at the Municipalities Newfoundland and Labrador symposium. He was remarkably likeable, and he was indispensable to one of Newfoundland’s most celebrated moments. I immediately thought, “Surely over the previous nine years he has evolved on the issue. My colleagues from across Newfoundland and Labrador would not leap to their feet for this man if he still believed marriage equality was wrong.”

Over the course of my four-year term as a municipal councillor I clung onto that belief whenever I attended functions which brought together other municipal officials. Though tempted many times, I never shared my internal resistance to the cult of Mayor Elliott’s celebrity.

On Oct. 1, 2017, my reservations were confirmed. “Gay marriage is wrong,” Elliott told CBC News in an interview days earlier.

The quote was a small part of a larger article that gave an overview of Elliott’s time as mayor of Gander. The quote sits beneath the sub-heading “Taking a Stand” in a large bold font which caps a section of the article that also speaks to Elliott eating fish with Fidel Castro. Surely this is a journalistic anomaly in Canada: prefacing a public figure’s antagonistic view toward same-sex marriage with the righteous line “Taking a Stand”.

A significant portion of the CBC’s piece — which included a photograph of Elliott looking at recovered metal from the twin towers — was devoted to Gander’s heroic role in assisting passengers from 38 grounded planes now immortalized on Broadway in the production “Come From Away”.

Our fascination and pride in the success of “Come From Away” is understandable. Lauded for its artistic achievements, and its participation of Newfoundlanders and Labradorians, the Broadway production has indeed put the province and Gander on the world stage. Claude Elliott is himself portrayed by Joel Hatch to much acclaim.

The Broadway show has been enjoyed by celebrities like Hillary Clinton, Whoopi Goldberg, Kevin Spacey, Tina Fey, and Bryan Adams among many others. Beyond launching a local tale into the global artistic milieu, “Come From Away” embodies a province defying popular stereotypes. The production flies in the face of Margaret Wente characterizing Newfoundland as a “vast and scenic welfare ghetto,” or Penn Jilette recently stating “Newfoundland is just a euphemism for stupid.” It makes perfect sense to celebrate a story mapped onto a stereotype we are willing to embrace: our kindness and generosity.

With this in mind, the success of “Come From Away” cannot invisibilize Claude Elliott’s refusal to embrace the rights given to LGBT+ Canadians, nor can it serve to negate criticism of his legacy. One can celebrate the generosity of the people of Gander — including the role of the town council of the day — but Elliott’s views on same-sex marriage disqualify him as a candidate for mayoral hero in Newfoundland’s political mythos. His views on same-sex marriage must be adequately weighed in the historical assessment of his legacy, and, in my view, are too discriminatory not to be considered disqualifying.

For Claude Elliott to publicly state “gay marriage is wrong” is grossly incongruent with the themes of “Come From Away” — empathy and openness — for which he and our province has gained fame. A simple Google search will find a synopsis of “Come From Away” which states in some form that “the Islanders in Gander and the surrounding towns open up their homes to the ‘plane people’, regardless of their guests’ race, nationality or sexual orientation.” Queer folks might be welcomed for a cup of tea, but not for a wedding ceremony.

One would be hard-pressed to find a mayor from Newfoundland and Labrador who has received international press coverage at the scale of Claude Elliott. The recent CBC article noted Elliott has had offers to speak at international conferences as far away as Hawaii. Due to his public profile, Elliott possesses a unique megaphone for Newfoundlanders and Labradorians. He ought to use his public profile to spread a much-needed message about the qualities of inclusivity and tolerance Newfoundlanders like to believe we all hold.

Elliott has noted a strong conviction to his religious beliefs which prompted his decision — from the time same-sex marriage was legalized until his retirement — not to officiate wedding ceremonies as mayor of Gander. This might sound familiar. In 2015, when same-sex marriage was legalized in the United States, Kentucky county clerk Kim Davis made headlines for refusing to sign-off on the marriage licenses of LGBT+ residents due to her religious beliefs. But it was homophobia, not divinity, which enshrined prejudice toward same-sex relations in religious texts. The legal director of the American Civil Liberties Union responded to the Kim Davis case by saying “the law is clear and the courts have spoken. The duty of public officials is to [uphold] the law, not place themselves above it.” In refusing to marry same-sex couples, Elliott did precisely that.

Claude Elliott stated “gay marriage is wrong,” yet at the same time said people should not be condemned for their sexual orientation. This is double-speak of the highest order. He at once posits individuals of differing sexual identities should not be discriminated against, while also stating his firm disagreement that LGBT+ folks should have access to the same social and legal rights afforded by marriage equality. One might suggest Elliott’s views are oppositional to “gay marriage,” not gay people. One cannot separate support for peoples’ rights from the person. It is those rights which guarantee people the realization of the dignity they inherently possess. In other words, I reject those who say my sexual orientation should not be condemned and in the same breath say they don’t believe in my right to marry my partner.

Undoubtedly there are numerous achievements the people of Gander, and the province at-large, can glean from Elliott’s track record which is worthy of admiration. However, his enduring view on marriage equality is a draconian blemish.

Donovan Taplin served on the Wabana Town Council from 2013 to 2017 as Newfoundland and Labrador’s youngest municipal councillor. He is currently working on a Master of Professional Communication degree at Ryerson University and sits on the Prime Minister’s Youth Council.

Trump “has done us a favour”: Gwynne Dyer
One of Newfoundland's most famous intellectuals argues the U.S. President's election in 2016 offers valuable insight into American politics and society before it's too late. 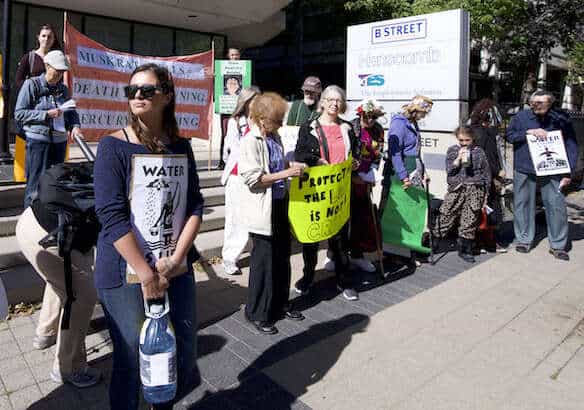