From Newfoundland to the edge of the galaxy: Encountering Ursula K. Le Guin

Le Guin’s worlds reshaped our own

I honestly don’t have another way to begin, except here: the fiction and prose of Ursula K. Le Guin was incredibly important to me. As a child, the lean, gorgeous sentences of A Wizard of Earthsea gave me my first sense of what good prose could be. As an adolescent, the political-spiritual time-lapse bomb The Dispossessed essentially reshaped or created every political thought I have ever had since I first read it when I was sixteen. As a young man, the pure sublimity of the journey across the ice in The Left Hand of Darkness forced me to confront myself. And even now as I am forced into something resembling middle-age, just about everything she ever wrote or said remains incredibly important. 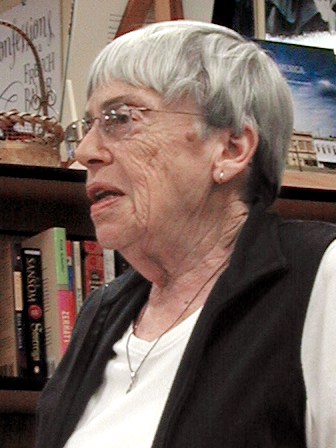 I find that beginning embarrassing; long before her death stories such as mine had started to feel cliché. Neil Gaiman, introducing Le Guin for the National Book Foundation’s lifetime achievement award a few years ago, recounted reading A Wizard of Earthsea and The Left Hand of Darkness for the first time as a boy growing up in England; in his narrative I could not help but recognize a striking similarity to my own eleven-year-old self, reading Le Guin for the first time in 1980s rural Idaho. Karl Ove Knausgaard—darling of the literary world for the last few years—also smuggled a beautiful tribute to her in the dead center of his Boyhood Island. In two elegant pages Knausgaard captures what it was like for a boy from Norway to encounter A Wizard of Earthsea for the first time; he too, said it better than I could, even in a New York Times interview. Novelist David Mitchell made it clear that Le Guin was one of his early idols in his thinly veiled coming-of-age bildungsroman Black Swan Green. Mitchell has mentioned more than once that he still makes a habit of rereading The Left Hand of Darkness and The Dispossessed. After she died, the Canadian practitioner of dystopia who survives her—Margaret Atwood—used some space at The Guardian to send her what might almost be considered a concise thank-you note.

Swing a board in a room full of writers and you’re likely to hit someone who adores her, has a story about her, or was profoundly influenced by her. For god’s sake, she got Newfoundland’s Michael Winter, at the tender age of twenty-three, off the hook for some bruised cheese scones.

An ex-girlfriend got in touch a few hours after the news she had died went public and expressed condolences; yes, Le Guin meant a lot to me, I thought, but who am I? The grief of a literary odd jobs man in an out of the way corner of the world compared to these literary greats is hardly newsworthy, and I have little to add to the more elegant tributes that have been pouring in since at least 1968, seven years before I drew my first breath in a Boise, Idaho hospital.

The beauty and danger of teaching Le Guin

So let me attempt another way in, a path separate from that as reader. Teaching Le Guin can be incredibly dangerous, frustrating, maddening; I absolutely mean that as a compliment.

Le Guin simply overwhelms students with a world so completely imagined that it seems difficult to do anything but stand back and let it wash over her hapless victims.

The Left Hand of Darkness is brilliant, a seminal text of science fiction, feminism, gender studies, and a fascinating look into the conversations that Le Guin helped to start at the end of the 1960s; I gave up teaching it years ago. Le Guin simply overwhelms students with a world so completely imagined that it seems difficult to do anything but stand back and let it wash over her hapless victims. Le Guin takes the young readers to a world where—as Gaiman noted—a king can become pregnant, then leaves them stranded on an icy street corner on Gethen, just gasping for air like an un-watered fish, trying to get their bearings on top of an alien glacier.

Come this week or next I’ll have another shot at teaching her oft-anthologized “The Ones Who Walk Away From Omelas.” The story, I have reason to suspect, may have seduced more than one first-year student into pursuing an English degree, and watching students’ faces as they stumble their way through the maze of Le Guin’s carefully prepared moral minefield is solid gold entertainment for this jaded, sadistic instructor. But the papers! I have seen the best minds of a generation attempt to provide an interpretation of “Omelas,” and even the strongest wits stumble away from her five-page story dangerously intoxicated, narrowly having dodged madness. Le Guin not only refuses to provide easy answers in her most famous story, she downright threatens the reader with a moral/interpretive vertigo I have yet to see replicated. Read it, enjoy it, I have learned to warn them, but write about “Omelas” at the risk of grade and sanity.

I taught The Dispossessed just a few months ago to one of the brighter groups of students I have ever had collected in a science fiction class. Along the way to falling in love with her, as I had as a teenager, the students squirmed, blanched, and then squirmed some more; assumptions were questioned, prejudices put in jeopardy, mental landscapes were flipped into photo-negative reverse. The students were smart. Le Guin was smarter; we all were intimidated.

In another month or so I will teach The Lathe of Heaven for the first time, and I have no idea what to expect any more than the odd hero of that novel knows what to expect when he repeatedly reshapes Portland, Oregon with dreams that come true. Any classroom scenario I could dream up will almost certainly be overturned by the chaotic effect of Le Guin’s riotous imagination on the unsuspecting undergraduate mind. Le Guin was George Orr, and she reshapes all of us.

The students were smart. Le Guin was smarter; we all were intimidated.

Teaching her work always feels like letting a live tiger loose in the classroom; someone is likely to be eaten, and it might well be me. Or, just to surprise us all, the tiger might decide to go to sleep in the corner, even as the class admires the animal’s ferocity in repose. Her work is a live thing. It will not respond obediently to the dictates and constraints of the educational-industrial-complex.

Or, rather than speaking to her work as a reader or a teacher, I might say something about her interventions in the political and literary conversations of the last few years. Allergic to any orthodoxy or anything that might develop into an orthodoxy, she used her voice and her intelligence to throw stinging barbs at anything that might pass for an establishment. When she took that lifetime achievement medal from Gaiman, she followed the standard script for a few minutes: in an aging voice that matched the timid grandmother she now resembled she thanked her agent, her family, her editor. Then the sweet grandma act went in the trashcan and she opened up what can only be accurately described as a fresh can of Pacific Northwest whoop-ass. She proceeded to blast Amazon.com as a profiteer, charge writers with their duty to create art instead of commodity, before finally reminding capitalists that they too, will be rendered to the dust heap of history along with kings who thought their petty gods had given them the right to rule.

Almost exactly a decade ago she wrote a trenchant essay for Harper’s that correctly predicted that the e-reader might have a limited shelf-life (so to speak) based on her solid grasp of publication history since monks copied the Bible by candle light; simultaneously she explicated the political potential of reading fiction as a weapon against the intellectual miasma that capitalism casts over all under its thrall.

Less than a year ago—well into her eighties—she wrote a razor-sharp three-paragraph letter to her hometown newspaper that lacerated ‘fake news,’ defended the research of scientists and journalists, and provided much-needed cover for writers of fiction. As if that weren’t enough, the haiku-style letter closed with a reminder of the societal danger that lies engender, and provided a hint as to why Santa Claus is harmless. She packed more into those three paragraphs than most us will fit into an entire lifetime of emails, tweets, Facebook updates, and M.A. theses.

And the woman was allergic to literary fashion; she wanted good work; she refused to say anything but what she thought was true. I found Elena Ferrante’s Neapolitan quartet brilliant, as did many reviewers and readers around the globe. Le Guin had the guts to question, in a casual but terribly effective blog post, if the new literary emperor had real clothes on; I walked away wondering if Ferrante’s novels could actually pass the Bechdel test. Neil Gaiman introduced her at the lifetime achievement award in glowing terms a few years ago, yes, but that hero-worship from the current king of fantasy didn’t stop Le Guin from pointing out last year in The Guardian that Gaiman’s latest effort on the Norse Gods might have been, well, a bit saccharine.

Her every-word-must-be-true approach to art, writing, and life felt like a cool draught in the poisoned-era of Trump, Brexit, and global warming denials.

I could go on—and believe me I am tempted to—but it all comes down to this: debate Ursula Le Guin? I’d rather fight a grumpy grizzly bear after I drank half a bottle of the bourbon with which she greeted Oregon sunsets. She’ll be missed in this era of rampant nationalist propaganda and manic pharmaceutical advertising, an era that has also seen the literary establishment drunk with two-faced flattery even as it provides cover for serial sexual harassers. Her every-word-must-be-true approach to art, writing, and life felt like a cool draught in the poisoned-era of Trump, Brexit, and global warming denials.

I found out she was dead a few minutes before I put my son to bed on Tuesday, January 23rd. It was a day I knew was coming, a day I had dreaded; I had followed her health from afar with fear and trepidation for some time. I texted the spouse-poet with whom I share a home and a child: “Ursula Le Guin is dead.”

The next morning, the spouse-poet, in solidarity with her grieving geek of a husband, watched a 2014 video of Le Guin speaking to undergraduates at Portland Community College with grace, poise, wisdom and humour. One of the undergraduates asked Le Guin if she wrote first drafts that were as crappy as his own. In the video Le Guin laughs long and hard after being asked this question; it was that capacity for joy, pleasure and laughter that I will miss as much as anything.

The spouse-poet texted back: “She has qualities I have too rarely seen. . . and when I watch her I wonder what the fuck most people are on about most of the time.”

Nathan Elliott holds a Ph.D from the University of Notre Dame and he has published peer-reviewed research on Charlotte Bronte and Gerard Manley Hopkins; he has also published creative non-fiction and fiction in a variety of venues. He is the 2016 winner of Newfoundland and Labrador Art Council’s Lawrence Jackson Writers’ Award for his manuscript How Red Became My Favo[u]rite Colo[u]r, a manuscript he’s currently trying to seduce a publisher into buying. ​He lives in Corner Brook with a poet and a six-year old Bach enthusiast and teaches university classes when not snowshoeing or biking.

From the Editor: The lights are back on