Napping our way to Mars

How sensible energy management today will slingshot us into space tomorrow

At 3 a.m. on a Friday night, the hallway of the Double Tree Hotel in San Jose, California is sprinkled with stars leading away from a party suite, as if a comet has stumbled out to drunkenly weave its way home, leaving a path of glitter in its wake. It’s space debris from one of the booze-soaked after hours events at NewSpace 2013, a commercial space industry conference for entrepreneurs held annually by the Space Frontier Foundation. Space people love to party, and after a couple of days of non-stop networking at the conference from morning until, well, morning, I’m worn out. My very late arrival is not crafted out of a desire to be hyper-fashionable, but out of a need to carefully manage my energy. I’ve reached that specific age where I accept the fact that if I want to be in the hot tub at 5 a.m. to shut down the party, I’d better be sensible and take a nap when other people are just getting started.

Getting there, one paper clip at a time

The task of energy management is also a central theme of the sober daytime discussions at the conference. The NewSpace 2013 tagline “preparing for exponential growth” hints at the pre-party flavour of the current space climate. Everyone is itching to do the fun stuff, but we have some logistical work to do to before we can explode warp speed to Mars. “Staple, furiously” might well be the motto. Considering that solving really big challenges takes a combination of creativity and practical logic, I wonder where the room is for inventive thought in the logistical process.

To an artist, the word “logistics” can have the effect of nails scraping down a chalkboard. There’s nothing that can seem to restrict inspired freedom more than getting bogged down in calculated details. However, the careful maintenance of energy flow is a necessity in getting to deep space. If artists want to influence the future of humans in space, it would bode well for them to take part in the initial, less glamourous, planning process. That particular process has a great deal to do with understanding and crafting effective resource systems.

Speaking at the panel on “A Future with On-Orbit Servicing”, Jim Keravala, COO of Shackleton Energy Company, emphasized the role of energy as a “paradigm buster” between transport vehicles and deep space. In this case, transport vehicles refers to spacecraft in Low Earth Orbit (LEO). Keravala noted that in order to get out of the gravity well that the earth sits in, over 85% of the mass of spacecraft going to LEO is made up of propellent and its associated structure. It’s akin to your car having to be composed of 85% fuel and fuel systems just to have enough energy to get out of your driveway. We need to create gas stations in LEO if we stand a chance of getting to our neighbour, Mars, let alone heading down the deep space highway. Of course, gas stations require one-size-fits all fuel pumps to be able to service all vehicles. Likewise, Keravala stressed the need for common standards and interfaces at future space propellent depots.

This need for sensible standardization was echoed by the other panelists, including Dennis Wingo, president of Skycorp. While Shackleton is focused on mining water from lunar poles for depot operations (we stop for water as well as gas), Skycorp is playing the role of gas station mechanic farther down the road, in higher geosynchronous equatorial orbit (GEO). During the panel, Wingo unveiled Skycorp’s new Spacecraft Life Extension System (SLES) program, which is designed to dock with any communications satellite in GEO and promises to extend the life by 10 years for 1/3 the cost of sending up a new satellite, as well as moving dead satellites to the graveyard orbit approximately 300 km above GEO orbit. While playing mechanic may not be as glamorous as inventing exciting new tech, Wingo emphasized the importance of focusing on a sensible business and the near-term market. Without it, he pointed out “the cool stuff later just won’t happen.”

Public-private partnership is an important factor in the early stages of this sensible business growth, and the public sector is also keenly aware of the broccoli-before-dessert current model of expansion. Also on the panel, Benjamin Reed, Deputy Project Manager of NASA SSCO, punctuated the desire to knuckle down now so that the real party can get started: “We launch a robotic servicing mission to GEO, we kick start that industry and then NASA never does it again…commercial industry will pick it up.” He continued, “we kick start this industry…and then we go help astronauts land on Mars.”

Dealing with the nitty-gritty may be anathema to free-spirited types, but the fact remains that in order to get to the good stuff, we first need to do our homework. If we are hoping for a sea change in getting humanity off the earth, we must be willing to open ourselves up to new ways of thinking and working. For artists, this may mean making more room for dry logic in our work. While the initial prospect of that may feel more painful than writer’s block, the payoffs can be wildly successful.

Visual artist Elizabeth St. Hilaire Nelson recently posted a narrative on Art Biz Blog outlining how she successfully funded her inclusion in an ArtPrize exhibition through adapting her artwork to a modular, logical system. This allowed her not only to be able to ship her work economically, but to create and market it with greater ease. As a result, the work morphed into something where the parts were on par with the whole. Rather than being diminished, creativity helped to fuel a better, logical system to get her where she needed to go. It’s easy to see how this kind of creative thinking could lend itself neatly to the “common standards and interfaces” that will develop with the first on-orbit energy refuelling depots or with the launch of standardized cubesats.

Missing out on the early, rowdy part of the space party to take a sensible nap may not seem like the most exciting approach to Mars, but it does have short term benefits too. After all, while prudently managing energy for the long haul, you also get time to dream.

Where the provincial government fails, municipalities lead
Our towns and cities are behind the growing success of the Municipal Stewardship Program. 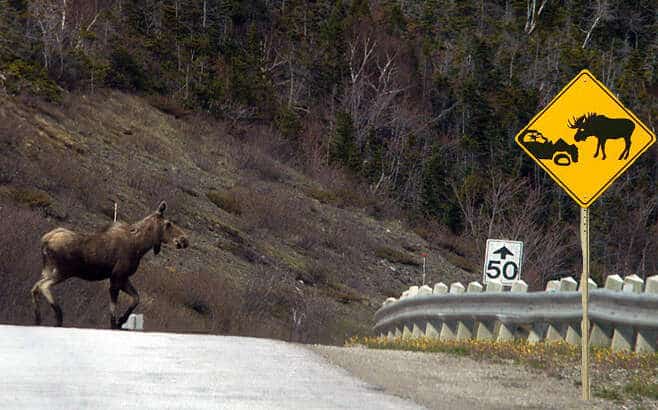 Don’t fear the moose
Concern about moose on the highway is overblown. Here's why.