Party it up with Party Down

‘The show’s tone captures the disillusioned, skeptical nature of many Gen X-ers’

Amidst a sea of pastry-wrapped wieners and fancy cocktails, the eclectic, rogue crew who work with Party Down Catering Company dream of critical acclaim and big paycheques, as they begrudgingly serve rich people food and beverages.

Henry (Adam Scott) is the lead protagonist in an ensemble cast of diverse characters with two things in common — they want to work in show business, and they hate working as caterers. Henry is the straight and narrow guy with real talent, but is starting to become skeptical that he’ll ever make it as an actor. Casey (Lizzy Caplan) is the sarcastically cool babe who’s just waiting it out until that indie gem comes along and propels her into Natalie Portman terrain. Roman (Martin Starr, of the too-short-lived Freaks and Geeks) mopes and rolls his eyes at everyone else, while he waits for Hollywood to discover his writing genius. Kyle (Ryan Hanson) is the charming and handsome (but kinda dumb) pretty-boy with little talent. But he sure is pretty, so who knows? And Ron (Ken Marino) tried to start up his own business, failed, and fairly rapidly throws himself into a pit of self-despair and humiliating drunken displays.

Co-created by the handsome, funny, charming Paul Rudd (yes, I’ve had a celebrity crush on him since Clueless), this Starz original series featured Jane Lynch in season one, before she went on to bring a little credit to a certain much-less-cool Fox show (I’ll give you a hint – it’s called Glee). The most recent season features Megan Mullaly, formerly of Will and Grace, as Grace — the bubbly, innocent, quirky Hollywood mom who works to support her daughter — a young Drew Barrymore-in-training. And I don’t mean grown-up, sophisticated Drew Barrymore, I mean the seven-year-old drunk Drew Barrymore.

The first season can be a little mediocre at times, but the show becomes much more comfortable in its own skin by season two. We get to know the characters, witness their relationships growing and changing, see them becoming friends (despite the subtle competition between them as they compete for parts).

The show’s tone captures the disillusioned, skeptical nature of many Gen X-ers. These guys aren’t quite the sunny, Gen-Y go-getter types, but they’ve got the tiniest bit more hope than the cast of Reality Bites. And there’s a gem of an episode in the first season, where the gang stumbles upon a party hosted by Steve Guttenberg, which ends up being cancelled, and Steve shares some of his insight of the craft by bunkering everyone down in his house for the night, pouring fancy red wine down their throats and getting them to do acting exercises and read scenes from Roman’s script. For anyone who has ever done a writing or acting class, or gets tickled pink at insider-industry talk (think Entourage), you’ll love this episode.

Rumour has it that Paul Rudd was originally slated to play the role of Henry, with Steve Carrell as Ron. But as much as I dream of staring into Paul Rudd’s dreamy blue eyes across the dinner table (and Steve Carrell’s OK too), I think the fact that these actors are relatively unknown increases the believability that they’re struggling actors on the show. They make the best of the little world they live in — and the finished product is an adorable balance of optimistic pessimism.

Party Down is available on DVD and iTunes. 7.8/10 microwave donuts.

Looking for signs of green in a grey, grey world
In a special extended blog, an exploration of green on this St. Paddy's Day 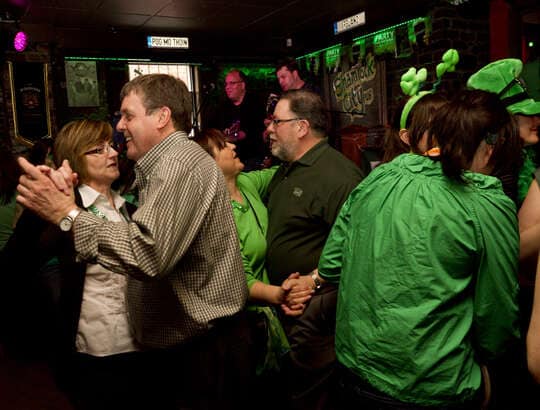