Including police in the Pride March is not a sign of progress.

In 2016 St. John’s Pride requested that members of the Royal Newfoundland Constabulary refrain from wearing their uniforms while participating in the annual Pride March.

Now the 2017 St. John’s Pride board has reversed that decision, saying in a public statement on its Facebook page that “after careful deliberation, the board has decided that progress for Pride includes the continuation of the relationship between the local police and St. John’s Pride Inc.”

The RNC have portrayed their desire to have a visible presence in the Pride March simply as a gesture of goodwill towards the LGBTQ community, but the reality is that the police in fact have a lot at stake in how their image is presented.

The initial decision to bar uniformed police from attending the Pride March came in the wake of an important conversation around police brutality that was finally unfolding in the mainstream media, thanks predominantly to the Black Lives Matter movement.

In 2016 Black Lives Matter Toronto (BLMTO) disrupted the Toronto Pride March in an effort to highlight systemic anti-black racism within Pride. BLMTO then presented Pride Toronto’s executive director with a list of demands, including the “removal of police floats in the Pride parade/marches,” a change that would make the event a safer space for some of the most vulnerable, often racialized queer and trans people who are disproportionately the target of police brutality and racist policing practices.

Police violence across the country is well documented and Newfoundland and Labrador is no exception. In the past 18 months, there have been several high profile cases of police violence in the media here: Joe Smyth, Doug Snelgrove, Sean Kelly and Troy Bennett, all amid criminal investigations and scandal. The RNC are quick to dismiss cases involving their officers as singular, anomalous—one bad apple, as they say.

What is happening at Muskrat Falls right now is an explicit example of the systemic injustices upheld by the police against racialized minorities. Over the past several years I have watched as my Indigenous relations in Labrador have been subjected to surveillance, harassment, violence and imprisonment by the police, while trying to protect their land, water and culture. Labrador Land Protectors have been waging a courageous battle against the provincial crown energy corporation Nalcor and the provincial government, to shut down the Muskrat Falls hydro project—an ecological disaster of monumental proportions that is poisoning the land, water and inevitably the people of Lake Melville and beyond.

Numerous videos have surfaced online, exposing the violent actions carried out by the police against peaceful Indigenous activists in Labrador. This was fully apparent in the unnecessary arrest of Emily Wolfrey, a young Inuk land protector who was dragged away by RCMP officers for yelling in protest of the arrest of her father and other Indigenous people trying to protect their food and way of life, while standing in an area identified by the RCMP as a “safe zone”. Violent actions such as this are not only condoned by the police, but also praised. Seven months after The Independent published video of this arrest, the cop responsible, Troy Bennett, was named ‘RCMP Peace Officer of the Year’ by Crime Stoppers NL.

With all of these instances of police brutality coming to light in Newfoundland and Labrador, it appears as though public support for the local police has begun to waver. This is a critical time for the police, and from their perspective it is imperative they rebuild public confidence — a key ingredient to civilian compliance and the maintenance of social control.

One of the RNC’s rebranding schemes is their new job-shadowing program for high school students. It’s an all-day event at RNC headquarters, where children participate in wholesome activities such as visiting a firing range, and learning “use-of-force” and handcuffing techniques—the exposure to which no doubt contribute to the normalization of police violence.

The RNC presence at the Pride March serves the same purpose as its job-shadowing day. It is an effort to sustain the facade of benevolence in order to minimize public backlash when they carry out state-sanctioned violence.

Removing the uniformed police presence (plain-clothed, off-duty officers were always welcome to attend) is both a symbolic and practical act. It is an acknowledgement of the historical roots of Pride, which quite literally began as a riot against the police and the systems of oppression they seek to uphold. It is also a concrete way to make our Pride spaces safer for some of the most vulnerable people within our community.

Those who support police inclusion in Pride argue it is a demonstration of progress to have the police, who once actively and openly persecuted LGBTQ people, walk alongside and celebrate us.

Including police in the parade is not a sign of progress—it is a huge step backwards for many marginalized queer and trans people that have experienced and still experience police violence, who are having their voices ignored and their realities erased. It raises the question: why are some people more concerned about the police being able to wear their uniforms than about the safety and comfort of the most marginalized within our community?

Instead of including the police in Pride, this moment could be used as an opportunity for LGBTQ Newfoundlanders and Labradorians to demand better—to demand justice for the communities that have been historically, and are still presently being, harmed by the police. That is what true progress could look like.

As long as the police continue to harass and harm any member of our community, LGBTQ or not, there is no place for them in Pride.

Calls for Nalcor audit, Muskrat inquiry intensify amid ongoing protests
Water levels in the Muskrat Falls reservoir have dropped 60 centimetres since a June 21 commitment from Nalcor that the water would be returned to… 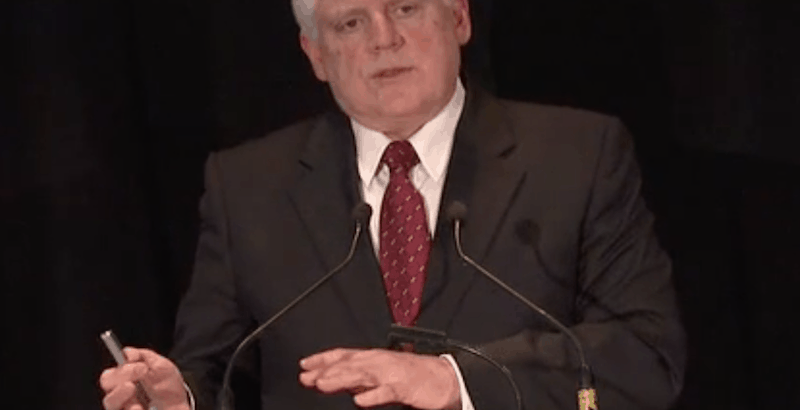 The truth about Ed
The former Nalcor CEO has a history of misleading the public on cost overruns at Muskrat Falls. It’s time for an investigation.