Reading utopia to reclaim the University

The university should be a publicly funded place to imagine a better world.

“We have always been Thomas More’s children,” wrote China Miévelle a day or two before the dystopian American election of 2016, “we can’t do without Utopia.”

In an introduction to her science fiction classic The Left Hand of Darkness Ursula K. Le Guin informed her readers that dystopian science fiction narratives serve a function: “If this goes on, this is what will happen.”

Or, as in the case of Margaret Atwood’s Oryx and Crake, the dystopia implicitly tells its audience of terrified readers: “You refuse to recognize that this world of mass extinction, fried food, gene splicing, class domination and sexual exploitation is the reality you already inhabit.”

In a more recent review, Le Guin notes that dystopias have become, perhaps, a little annoyingly popular as of late. From 1984 to Mad Max: Fury Road (the dystopia has made for reliable franchise dollars!), we have imagined the end of the world, again, again, and again — and even now Blade Runner 2049 slides into our movie theatres to serve us another terminally hip technological, genetic slavery nightmare for the price of $12, provided we are willing to forgo the bucket size of popcorn and the gallon of soda (which cannot help but remind us of the bloated American dystopian space cruisers of Wall-E).

Where then, are the beautiful dreams of peace, prosperity, and liberation? Does our culture dream of a beautiful future anymore? Or, with the fall of the Berlin Wall and the apparent route of Soviet style communism, have we simply decided that imagining great things about the future just isn’t worth it?

Revolutions are the material expressions of the fevered and oppressed imagination: What will the American colonies be after the nightmare of British oppression? What will France be after we have  ended the domination of the Church and the landed aristocracy? What will Ireland be after we have seized back the lands stolen by Cromwell?

I have a dream, bellowed that most unrealistic of Americans, that American citizens of African descent will one day be treated as human beings before American law and in American culture and that the absurdity of skin shade will no longer be the single most defining variable in a child’s economic future.

The utopia—and perhaps Martin Luther King Jr. recognized this odd fact of literature and rhetoric standing before the masses on that hot August day in 1963—has not been tried and found wanting—to steal a line from G. K. Chesterton—but found difficult and untried by a profit-driven ruling class in the West.

Universities should be, according to temperament and historical precedent, utopian spaces.

Universities—at their best—ask us to use the power of the narrative, the dream, and the what could make this world a better place implied in every minute spent in a lab doing research to imagine (remember John Lennon’s hymn to the power of our ability to imagine!) a utopia here on Earth. Or at least try, and in failing, still reach for heaven, as Robert Browning implied we should all be doing.

In their best possible incarnations universities are separated from the need to create profit; such institutions instead work for, and exist because of, the common welfare.

In the privatized dystopia created by free-market fundamentalist zealots Margaret Thatcher and Ronald Reagan, and brought to fruition by neoliberal capitalist apologists such as Tony Blair, Bill Clinton, George W. Bush, and Barack Obama, it has become difficult to even remember that the common welfare and the public good were not always cynically derided as impossible dreams. A culture that has decided that ‘utopian’ is a pejorative is a culture that has given up on its children.

It can be no surprise then, that universities have faced the incredibly shrinking publicly funded budget. Almost every university I have attended or worked for since 1993—private and public—has faced the relentless, perennial razor-blade of the ‘budget cut,’ even as the same universities have raised tuition on their students and reduced student services and course offerings, even while finding ways (often deceptive ways) to pay faculty less.

And that lack of funding has consequences; in the Midwest of the United States, universities that once generated the research that brought America to intellectual prominence now teeter into potential irrelevance, and threaten to take the communities that depend on them as economic generators into economic despair. The universities I have been associated with routinely built or acquired huge new edifices even as they complained that they did not have the money to maintain the buildings they did have, and charged undergraduates outrageous prices for residential space.

University scientists increasingly look to private corporations to fund research and—we can hardly be surprised—we find that they are producing research that is suspiciously friendly to corporate interests.

Students work long hours to pay for an education that offers them decreasing returns on their investment; a huge percentage of their classes are being taught by exhausted, overworked workers hired ‘just-in-time,’ temporary employees made continually nervous about the possibility of their ongoing employment, and thus far more vulnerable to sexual harassment and discrimination.

The administration, the faculty (and the unions that represent that faculty), and perhaps most especially the students themselves are now beginning to remember the power of the utopian dream to reshape and reinvigorate the university.

What if, students have lately started to ask, we returned to the utopian dreams of our parents, and the realized dreams of Scandinavia and Germany, and paid little or next to nothing in tuition, asking tax payers to shoulder the cost of educating the next generation (since an educated workforce is every bit as much a public good as a well-maintained highway or a properly engineered dam)?

What if, scientists ask, we created research that was free of the strings that corporate purchasers inevitably attach to their private grants, instead generating knowledge for the greater good, knowledge that could be used by the communities that pay for that research, rather than patented for corporate gain?

What if, contingent, per-course, and short-term contract faculty are starting to ask, we were paid a reasonable wage and granted even a modicum of job security that allowed us to teach our classes without constantly worrying about how we were going to pay the rent? What if we were more focused on writing a decent lecture, and less focused on perpetually refining our CV for the next round of job-interviews?

What if, student associations and faculty unions might ask, the ever-expanding university administrative class actually protested, with public voices and visible bodies, the cuts imposed by corporately purchased politicians, and thus refused to act like academic robber barons, profiting off of sky-rocketing tuition and reduced academic services?

What if, women and people of colour and the LGTBQ community and Indigenous members of the university community ask, we knew that we were safe from sexual harassment, were guaranteed an equitable wage inside and outside the university, and had a chance to enjoy the same employment opportunities as the inevitably white, straight, male hegemony that shaped, created, and now dominates the leadership class of the current university? Why, they might dare to ask, can we talk incessantly about intersectional feminism in the university classroom while failing to provide even one public diaper-changing station, breast-feeding space, or subsidized child care centre? Or even begin to address the now well-documented fact that faculty teaching evaluations are racist and sexist?

What if, some librarians are radical enough to ask, open access to information could transform the world into a better place? What if we stood up to the corporations that are price-gouging us for the flow of information that makes the utopian project of the university possible?

What if, the students and the contingent faculty might ask, the political protections afforded by tenure were used to question the societal status quo, dismantle universities’ hierarchical, racist, and sexist leadership structure, instead of being used as a tool to impose silence on those who wish to achieve the tenure-track, to frighten those on the tenure-track into silence, and thus produce a zombie-shuffling, permanently silenced tenured class?

What if we created such a space, and then, instead of marketing image over substance—as so many universities have chosen to do in the form of the homogenous glossy brochure and high profile website rollouts—we marketed a valuable, affordable education? Such universities might actually recruit and retain enrolment—not through the creation and the maintenance of a brand, but through a sincere communal relationship with the students, faculty, and staff that inhabit these spaces.

Throughout World War II, the governments of Britain, the United States, and Canada spent nearly $2 billion USD (about $27 billion today), employed nearly 130,000 people, and built sites of varying sizes at 30 different places in those three countries. That publicly funded research project was a resounding success that has imposed a dystopian nightmare on the planet since the first mushroom cloud rose over the New Mexican desert in 1945.

The very thought of Hitler with a nuclear weapon galvanized an international research project the likes of which the planet had never seen, and has not seen since. Apparently we can use public funds for weapons of mass genocide, but not to prepare a better, more perfect future for our children.

Needed now more than ever

Are we, as a planet, so short on problems that we can afford to neglect the massive societal power of the publicly funded university to reimagine the way we live and stimulate our economies?

Has the burning fuse of global warming been snuffed out?

Have the problems of food production—and food waste—for a hungry world been resolved?

Has our desperate appetite for sources of clean energy been satiated?

Are the species of our planet safe from extinction, residing in balanced biomes?

Is democracy the order of the day, or is there still a role for political scientists to play?

Do our journalists know that they can report the truth without fear of reprisal?

Have the injustices of colonial exploitation been addressed, and the power imbalances created by centuries of capitalist exploitation resolved?

Are our poets, artists, musicians, and yes, scientists free to imagine an even better world than the one we have now, or do they continue to suffer from the kind of hunger and want that stifles voices, shuts down studios, and mothballs labs?

Utopias, as Miévelle reminded us last year, are always a dangerous double-edged blade: they remind us of what we are not, even as we imagine what we could be. Every utopia hides a dystopia, and every dystopia whispers at the possibility of a utopia; every narrative we absorb liberates even as it opens gaping wounds.

Failure only comes when we fail to imagine the beautiful world that could be.

Nathan R. Elliott is currently working this third contract teaching English Literature at the Grenfell Campus of Memorial University of Newfoundland; he defended his Ph.D dissertation at the University of Notre Dame in 2006. He has published peer-reviewed work on the playwright Joanna Baillie, the novelist Charlotte Brontë, and the poet Gerard Manley Hopkins; he has published creative nonfiction in the American literary magazines Creative Nonfiction and Tahoma Literary Review, as well as the ‘feminist nudie mag’ Peach Fuzz. In April Nathan was announced the winner of the 2016 Newfoundland and Labrador’s Arts Council’s Lawrence Jackson Writer’s Award for his in-progress manuscript How Red Became My Favo[u]rite Colo[u]r.  He can be followed on Twitter @writeronabike 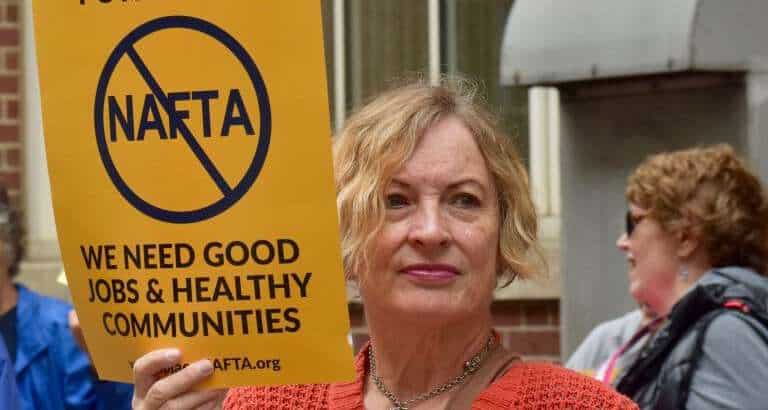 It’s time to end NAFTA
A renegotiated NAFTA that satisfies Trump would benefit the U.S. -- but only its abrogation would benefit most Canadians.

Uncovering the early years of organized soccer in Newfoundland
MUN professor appeals for help from the public.