Coastal cultures worldwide have made seaweed an integral part of their diet. Why haven’t we?

Foods, like fashions, are of the time. Although the staples remain constant, the preparations and spicing vary. Likewise, trends in food are always changing and there is a push to keep the chic in the hands of the few. Ironically, doing so often involves appropriating so-called peasant food for the elite. As was done with lobster, considered by early New-Englanders to be food for the poor. Ditto for goose liver (now foie gras). In the 19th century, beluga caviar was served at bars to encourage drinking, much the way peanuts and pretzels are today. In fact, many of the foods today considered to be delicacies were at one time looked down upon as food for the poor who had no other recourse. Their lowly status was often directly linked to their widespread availability, as per Adam Smith’s theory of supply and demand.

So I’d like us to keep in mind the idea that (at least maybe) the food choices we make are as arbitrary as those we make in fashion – foods that disgust many (snail, sheep eyes) are considered delicacies by others. I’ve written on local food in this column before but have mostly focused on locally sourcing foods that we already regularly eat. Today, I’d like to make a pitch for a (very) local food that doesn’t get the appreciation it deserves. I’m talking about seaweed.

Although we use seaweed byproducts (agar agar, carrageenan) as thickening agents, the plants themselves have not yet taken the Newfoundland food market by storm. Seaweed is a staple food in a lot of coastal places, like Japan, and where there are few native edible plants, such as Iceland and Hawai’i. Considering the struggle many Newfoundland fisher families endured to make it through the winter and their competence (as evidenced through traditional recipes and stories) to make use of local edible wildlife and vegetation, it strikes me as odd that the same has not happened here. Even stranger given the Irish tradition of mashing dulse (a red seaweed native to the North Atlantic) into porridge.

Seaweed is a generic term for more than 20,000 species of algae, hundreds of which have been incorporated into the human diet. Sea vegetables are high sources of vitamins A, C, and E as well as iron and calcium. Many vegans incorporate them into their diet to ensure they maintain adequate levels of complex B vitamins. Really, though, we should all be eating more seaweed – it is local, abundant, renewable and easily stored for long periods of time. Depending on the variety used, it can lend a salty, savoury flavour in foods that is hard to achieve otherwise.

Not just for sushi

Seaweed is probably best recognized for its use in sushi, and many people are at a loss when it comes to incorporating it into their usual diet. Fresh or re-hydrated seaweed makes an excellent substitute for, or addition to, your standard salad. For a healthy substitute for chips, brush dried seaweed with olive or sesame oil, sprinkle with salt and bake on low (+/- 200 degrees) until crispy and slightly browned. I particularly enjoy using seaweed in soup, replacing some or all of my usual stock with simple dashi. You can find any number of dashi recipes online, but don’t worry too much if you don’t have all the ingredients – I have had great success by simply simmering a handful each of wakame and kombu in 4 litres of water for 20 minutes or so, and adding the whole batch to lentil or other vegetable soups (bringing the seaweed to a boil compromises the delicacy of the taste, resulting a ‘fishier’ flavour.

Although, theoretically, all seaweeds are edible, remember that the water quality determines the quality of the plant. Unless you are able to harvest the plants from a boat well off the shore, it’s not recommended to harvest your own. In and around St. John’s, dried seaweeds can be purchased at Bidgood’s and Food for Thought. Call your local grocery or health food store to see if they carry seaweed products.

Finding Newfoundland in Waterford [Ireland]
Sometimes you don't find what you're looking for, but you discover something you didn't expect... 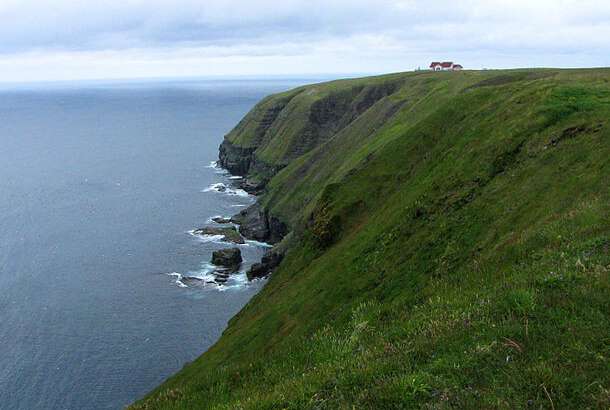 Pummelling Parks: Government budget amputates core services
Part one of a two-part series on the cuts to parks and reserves.