TheIndependent.ca is adding all content from its print run (2004-2007) to its online archives.

Over the course of the summer months, TheIndependent.ca is going to be connecting with its past… in a big way. All of our printed content from 2004 to 2007 will be coming to life once again – online.

To celebrate this marriage of past and present, we will be re-running The Independent’s Cost-Benefit Analysis of Newfoundland’s entrance into Canada, an award-winning series which was originally printed in the Fall of 2004 over the course of 6 weeks. Though Newfoundland and Labrador’s place in the Canadian landscape has changed since 2004, Memorial University economist Dr. Wade Locke’s presentation last week suggested that we may not be that “have” province for the long term. As such, we believe that this analysis of our relationship with Canada is more relevant than ever.

Each Thursday and Friday leading up to July 1st — both Canada’s birthday celebration and Newfoundland’s remembrance of its darkest hour — TheIndependent.ca will be re-issuing all 6 parts of “FINDING THE BALANCE: A Cost Benefit Analysis of Confederation.” To set the stage for the coming weeks, read former editor Ryan Cleary’s introduction of the series and its mandate below.

Is Newfoundland and Labrador a drain on Canada or vise versa?

Starting in its next edition, The Independent will begin what may be the most ambitious editorial project ever undertaken by a Newfoundland and Labrador media outlet — a cost benefit analysis of Confederation. Over six weeks, the newspaper will examine the province’s contribution to Canada since 1949, and Canada’s contribution in return.

The series will examine six distinct topics — oil and gas, transportation, natural resources, finances, hydro and Terms of Union. The key element of each front page for the duration of the six-week project will be a balance sheet, updated weekly until the final totals are presented in the last installment.

For 55 years, Newfoundland and Labrador has been seen as a drain on the Canadian economy, a have-not province that, despite immense wealth in natural resources, can’t seem to get ahead. Since Confederation, the commercial groundfish fishery has collapsed, to the point the once-great northern cod stock may be declared endangered; hydroelectric resources in Labrador have been developed for Quebec’s gain; oil resources have been brought on tap in such a way that Ottawa is the principle beneficiary; double digit unemployment has persisted for 30 years; and, in the last decade, 70,000 people — 12 per cent of the population — have been lost to out-migration.

Those facts were pointed out by the 2003 Royal Commission on Renewing and Strengthening Our Place in Canada. The question the commission didn’t answer is whether this place is capable of getting to its feet — or whether, indeed, something is keeping the province down. The Independent will attempt to answer that question with research and facts, analysis and interviews.

The financial benefits this province receives from the federal government include obvious ones — equalization, transfer payments and old-age pensions. In return, the province gives back taxes — personal, corporate and retail.
Headed by Vic Young, the commission concluded that federal spending in the province since 1949 exceeded the amount of revenues Ottawa has collected in this province by a wide margin.

“In the past decade, that gap has been very large, ranging from between $2.5 billion and $3.5 billion a year. In 2000, federal spending was approximately $4.8 billion, against revenues of about $2.2 billion, a difference of some $2.6 billion.”

But those aren’t the only amounts to be added to the balance sheet.

How much is Labrador’s iron ore worth to the factories and plants in Ontario and Quebec where kitchen sinks and bicycles are made?

How much is the Newfoundland and Labrador fishery worth to the foreign plants that process fish caught off the province’s shores? What’s the total of the ongoing tradeoff?

What’s been the cost of Ottawa’s failure to end overfishing?

Can a price tag be put on the 197-mile economic zone Newfoundland and Labrador gifted to Canada on the day the 200-mile limit was born?

Where do the profits go from the pulp and paper mills that chew through the forests?

Who makes more from Grand Banks’ oil — Ottawa or Newfoundland and Labrador?

The federal government provides a link across the Gulf, but is the service what was signed for in the Terms of Union?

How many federal jobs does this province have compared to the rest of Canada?

How much in subsidy does Ottawa give Newfoundland and Labrador every year to grow food?

How does that compare with what other provinces receive?

How much money would this province have if Quebec didn’t collect all the profit from the upper Churchill? Why didn’t Ottawa give Newfoundland and Labrador a corridor back then for power to be delivered to the United States? Will the federal government grant the province one today for the lower Churchill?

Boiled down, the question The Independent will attempt to answer is this: “Who’s getting a bargain here — Canada or Newfoundland and Labrador?”

In its final report, the royal commission stated that when provincial governments have engaged in balance-sheet exercises, the results have been “fruitless debates with the federal government over assumptions, use of data, methods of analysis and items to be included.

“Battling over balance sheets is not constructive; it does not lead to progress. It should be avoided so as not to distract the provincial and federal governments from focusing on what really matters — ensuring that the federation works for its constituent parts.”

But is the federation working for Newfoundland and Labrador? That may be the ultimate question a renewed debate will ultimately answer.

Stay tuned toTheIndependent.ca on Thursdays and Fridays leading up to Canada Day for FINDING THE BALANCE: A Cost Benefit Analysis of Confederation. 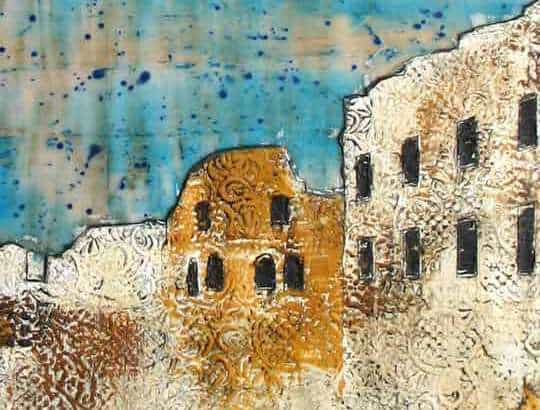 Independent Art: Falling Back Into Place
Artist of the month, Jillian Waite, hangs her second piece from the walls of TheIndependent.ca